This puzzle continues "Red cells in a 4x4 table".

Question: What is the smallest possible value for the number $r$ of cells in this table.

This is a proof that Paul Evans solution is optimal. I write the solution in a different way but is the same 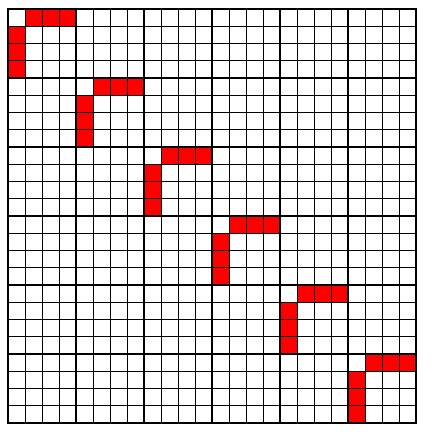 We want to prove that $R≥\frac{3}{2}*N$ in a valid grid.
You can easily find that :
- There cannot be empty rows or empty columns in an optimal grid.
- By moving some cells, we can change an optimal solution to an other optimal solution where every rows and columns has 3 or less red cells. I call it a reduced grid
- If you swap 2 lines or 2 rows of a valid grid, you still have a valid grid. If the grid was reduced, it still is. 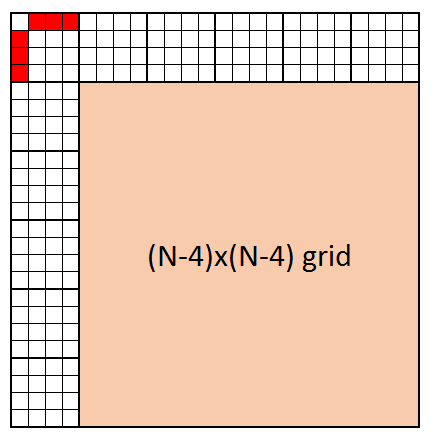 It's 3 reds on top of each other shifting over one column and down three rows for the first $\frac34\cdot2016$ rows and first $\frac14\cdot2016$ columns and the mirror image through the main diagonal for the bottom rows and right columns.
This works as every cell is interconnected to at least 2 reds.
Let's call the formation of vertical red triplets spanning the first $\frac34\cdot2016$ rows and first $\frac14\cdot2016$ columns the vertical arm and likewise the formation of the horizontal red triplets in the bottom right the horizontal arm.
Consider a red triplet in the vertical arm.
If we remove a red then we will need a minimum of two reds on top of each other in the same rows as the remaining reds to maintain interconnectivity between all these reds.
We could now remove the corresponding red in the column of the two new reds from the horizontal arm.
But that's a net gain of one red so doesn't minimise the solution.
And if we add a red to this triplet we don't shorten the horizontal arm in fact if we add 3 or more we lengthen the horizontal arm so we're adding reds again.
So this solution (thanks to Trenin for pointing this out) is a local minimum.

The answer from @PaulEvans :

One way to prove it is via linear programming:

Write similarly $c_1,c_2,c_3$ for the same quantities column-wise, and $R$ for the total number of red squares.

Note that no row or column can be empty (if a row is empty, every column must contain at least 2 red cells, for a total of at least 2*2016. So this cannot occur in an optimal solution)

Now, we have some easy constraints:

We then need to

which gives an optimal solution:

To be perfectly convincing (i.e., make sure it's not a bug of my solver), we'd need a feasible solution fo the dual problem with the same value... if anyone is interested in giving one, please do :)

Because by filling an entire row and an entire column, while leaving out the cell where they overlap, we will satisfy the conditions

We need to ensure every cell is interconnected with at least two red cells. The easiest way to accomplish this is by filling the first column and row with red cells save for the one where they overlap. Any other orientation will be equivalent or produce additional unnecessary overlap.

2016+2? If you color one diagonal and the other 2 corners...doesn't that give the expected result?