Here are two questions about my grandpa Herb, along with parts of the answers. Can you complete the answers to both questions?

A: A smALL RIce

Here is a helpful clue, in the form of a chess puzzle, to help you answer the question. I hope it helps. 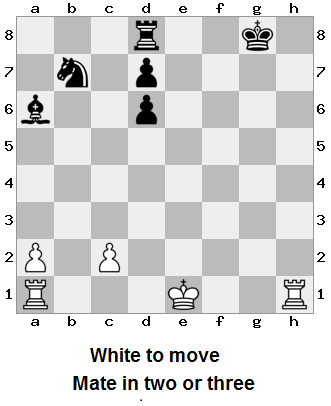 It's been a few days, so I wanted to some hints in case anyone wants them.

The sequences of moves are helpmates, meaning black and white work together to make the checkmate possible.

An idea I had that may or may not be going anywhere:

The sayings look like those you spell out on a calculator.
If you draw the first one, you get:

Upside-down, it seems that it looks like various letters and numbers:

h85a06a4 (The 0 is the odd one out since all the rest are used to refer to squares.)
I doubt this is the exact method, but it seems promising.

White cannot force a checkmate in two or three moves. This is a help-mate puzzle, where White and Black work together to arrive a checkmate (this is hinted in the description of the chess puzzle: helpful clue, help you answer, hope it helps).

Even with Black's help, White cannot mate in two. However, White can help Black to mate in two: the unique sequence (found by f'') is

There is also a (nearly) unique sequence for White to help-mate Black in three moves (which f'' also found):

So grandpa Herb's favorite president is Franklin Delano Roosevelt (who is often referred to by his initials, FDR), and on March 26, 1987, grandpa Herb bought a small rice cooker at the store.

1: The notation for castling in PGN format uses the letter 'O', while the FIDE handbook uses the numeral '0'. The difference is unfortunate, as the solution to this puzzle requires using the letter rather than the numeral.

Not the answer you're looking for? Browse other questions tagged word enigmatic-puzzle chess or ask your own question.

10
Queen & "paralyzed" King vs King
12
A Chess Lock Puzzle?
13
How many total checkmates can you possibly make against the enemy king?
4
Fantastic Foxhole Failures
8
Find Those Chess Notations! #2
5
Kill me or I kill you first!
4
The Dropper, But With A Twist
8
Three-player chess on a 7x7 board
11
A knight chased by three knights