I'm implementing a Douglas Engel's puzzle, Color Wheels (reproduced with permission) and now I would like to check solutions of users.

For those of you that don't know the puzzle, here you can see that it consists of two intersecting wheels with three common pieces. The wheels can rotate so there is an interchange of pieces. As you can imagine, after mixing the pieces, the objective is to rearrange to original position, pretty much the same as in Rubik's Cube. 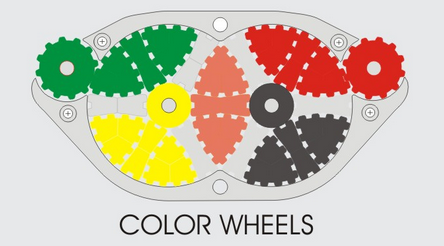 I have two problems:

(Please note that my implementation takes into account the orientation of pieces, but the original puzzle "Color Wheels" doesn't. By now, I am interested in the version without orientations, like in the image above).

*This means that sometimes I will give 3 stars to solutions that are not truly optimal, but that's ok.

As you say, you are implementing a type of Douglas Engel's puzzle, an "Enigma". Given the colour set and the fact that you are ignoring the orientation of the triangular wedges ("corners" in twisty puzzle lingo) in your implementation makes it a either a "Turnstile" or "Avenger" (I believe one with orientations is called a "Puzzler"). Since, in your implementation, the colours must be placed in triples separated by uncoloured edges, with one triple in the intersection, but the permutation of the triples amongst these locations is not a constraint makes it an Avenger.

During a solve the state may be changed by turning either the left wheel or the right wheel in increments of $\frac16$ of a rotation. If we measure any amount of consecutive $\frac16$ turns of the same wheel as a single move (like the Rubik's cube's "Half Turn Metric") then after we have turned one wheel the next move may only be the other wheel (otherwise we could concatenate it with our previous move). A full turn of either wheel would be the identity, not changing the state, so there are 5 ways we can change the state at any move; and before any move is made there is the choice of with which wheel to start.

A sequence of such moves may then be written out in a similar fashion to Singmaster notation as a string of symbols of the form: W[n][']. For example L3 would represent turning the left wheel $\frac36$, or R2' would represent turning the right wheel $\frac26$ anti-clockwise. We may leave out the 1 when n is 1 for brevity (we could leave 1 in and leave out W for all but the first turn, but for ease of reading I have not done so). Thus the set of symbols is {L, R, L', R', L2, R2, L2', R2', L3, R3}.

Since, disregarding specific locations of uncoloured edges, we can:

As per Kevin Cruijssen's comment Jaap Scherphuis has a page dedicated to this puzzle where he shows results from brute-forcing God's number for two simpler versions - "Novice" and "Challenger", both having a God's number of $13$, so the Avenger will almost certainly have a God's number of at least $13$ too.

Maybe someone will post a group theory based proof or solver, but until then I have created a brute-force solver which finds optimal solutions. It works by brute-forcing and cacheing state-sequence pairs up to some move length from the goal state, then when presented with a scramble it first looks to see if its cache contains that state, and if not it starts brute-forcing another set of state-sequence pairs this time starting at the provided scramble rather than the completed state (up to some maximal depth) when this yields a state that is in its cache it then prefixes the cached sequence with this on demand sequence, which is an optimal solution for the scramble (since all reachable states in the cache are paired with optimal solutions and the solver is completing the on demand search at depth n prior to considering any at depth n+1). Code for this is here. 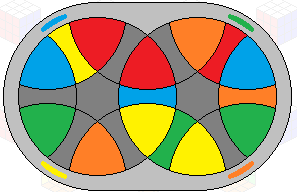 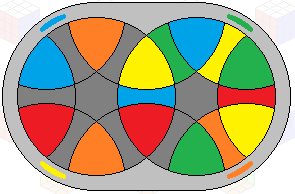 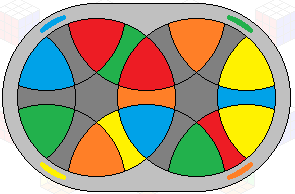 (I changed the colours of Jaap's applet to be in line with your goal state picture.)

The break down of Avenger states by optimal solution length is: 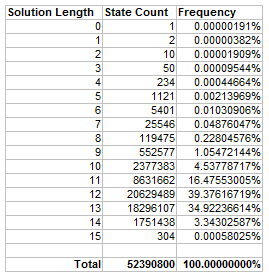 Creating a solver (and persisting the cache to disk) with 15 cached moves took 65 minutes for me and used 13.8GB RAM* (2.6GB when persisted to disk), however a solver with 8 cached moves and 7 on demand moves works quickly (sub-second solves), only takes 3 seconds to initialise with file creation and only uses 55MB of RAM (7.8MB persisted to disk, allowing for sub-second start up).

I made some attempts to reduce memory footprint by compressing states to integers representing the permutation (rather than a length 21 tuple of integers as it uses now) which should have saved almost 80% of the memory, but so far, for the methods I've implemented, the cost in terms of calculation time are too great and they only seem to save about 50%; furthermore an implementation in a statically typed language could certainly be made more lightweight.

So far I have not seen a Turnstile that requires $18$ wheel turns, but there could only be one, so I would not rule out $18$ for God's number for a Turnstile, but I think $19$ or more is unlikely.

So, to directly answer your other specific question, $90$ random turns of alternating wheels will certainly cover the space for an Avenger and almost certainly will for a Turnstile (and probably for a Puzzler too), however it is unnecessary to worry about that since an alternative approach would be to put the puzzle together as I described. Another way is to do what I did in my code, in Turnstile.scramble(), and simply shuffle the edges and shuffle the corners - since every permutation thereof is a solvable state (at least for the Avenger or Turnstile).

You could also retry if you happen to scramble to a state that you know is solvable in less than some number of turns (i.e. is considered too easy).

Since it wont fit here I have made my Python code for brute force evaluation available on github.

Not the answer you're looking for? Browse other questions tagged combinatorics puzzle-creation twisty-puzzles or ask your own question.