Ernie and the Revisitation of the Aunts

I was hanging around at home last week, a little lost for something to do, when I got a phone call from Ernie. He was in a bit of a panic because a guest was going to drop in later in the day. He had inadvertently dismantled his oven for a certain experiment he was working on so had no way to bake a cake for the guest. "Is there any way...", he pleaded, "...that you would be able to bake something for me in your oven?". I was in a generous mood so told him I would be delighted to help and asked what time he needed the baking brought over. We settled on a time that afternoon and after checking that the guest didn't have any allergies I hung up and proceeded to the kitchen where I began to mix the ingredients.

I was just about to put the dough into a nice round tin when the phone rang again. It was Ernie. "One little thing I neglected to mention." he said. "The guest is Great Aunt Titania. Now as you know, Auntie Titania loves symmetry above all else, so you might want to make the cake in the shape of a perfect regular polygon." I winced a little - my last meeting with Titania had been a bit stressful - so I poured myself a wee brandy to calm my nerves. After a moments thought I could see a simple solution. I put the round cake tin back on the shelf, selected a more appropriately shaped one, poured in the dough, and popped the cake into the oven.

Some time later I was just turning the cake out onto a rack to cool when I got another call from Ernie. "Small change in plans" he said. " Unknown to me, Auntie Titania invited her sister Great Aunt Lusitania to drop in too. Now as you know Auntie Lusitania loves equality above all else, so to keep her happy you might want to have two cakes, both the same shape and size of course". I felt a sharp pain in my left temple, it didn't pay to leave Lusitania unsatisfied, but I still needed to keep Titania happy. I poured another brandy to dull the pain. "But I don't have enough ingredients (or time) to make a second cake" I lamented. "Oh that wont be a problem", Ernie responded, "I am sure the aunts won't mind if you cut the original cake up and reassemble the pieces into different shapes". After a little thought I could see a fairly simple solution so I made a series of straight, vertical cuts in the original cake and reassembled the pieces into two smaller identical cakes. I was quite proud that there was no waste left over when I had finished, so I poured myself a celebratory brandy.

I was just about to put the two (identical) cakes into a box to take them over to Ernie, when the phone rang again. I could tell from the ring-tone that it was Ernie, so I had a small brandy to calm my nerves before answering. "Small change in plans" he said. "Unknown to me, Auntie Lusitania invite her sister Great Aunt Bismarkia to drop in. So I am afraid we will need three cakes - and as you know, Auntie Bismarkia loves efficiency above all else. You might want to use the smallest total length of cuts possible when re-dividing the cakes ". I swigged a large drink from the bottle - my head was pounding. "But I wasn't thinking about efficiency when I made the first cuts", I lamented, "How can I possibly satisfy Bismarkia?". "Oh I am sure she will compromise just a little.", Ernie responded, "Instead of the smallest total length of cuts, why not just ensure you end up with the smallest total number of pieces instead". It took me quite a while to find a solution, then I made another series of straight, vertical cuts in the existing cake pieces and reassembled them into three still smaller identical cakes. I was quite proud that there was no waste left over when I had finished, so I poured the last of the brandy into a glass to celebrate.

I decided that driving wouldn't be the most responsible way to get the cakes to Ernie, so walked (slightly unsteadily) around to drop them off at the door. "Perfect", Ernie said as soon as he clapped his eyes on the cakes, "Regular polygons - that will make Auntie Titania happy, all three cakes are the same size and shape - that will satisfy Auntie Lusitania, and I see you have used the smallest possible total number of pieces to achieve the goal - that should get Auntie Bismarkia's approval. You made a lucky initial choice of cake-tin as no other starting polygon would use less pieces." I was offered a place at the table, but felt that the aunts might not quite approve of my somewhat slurred speech, so I headed back home. 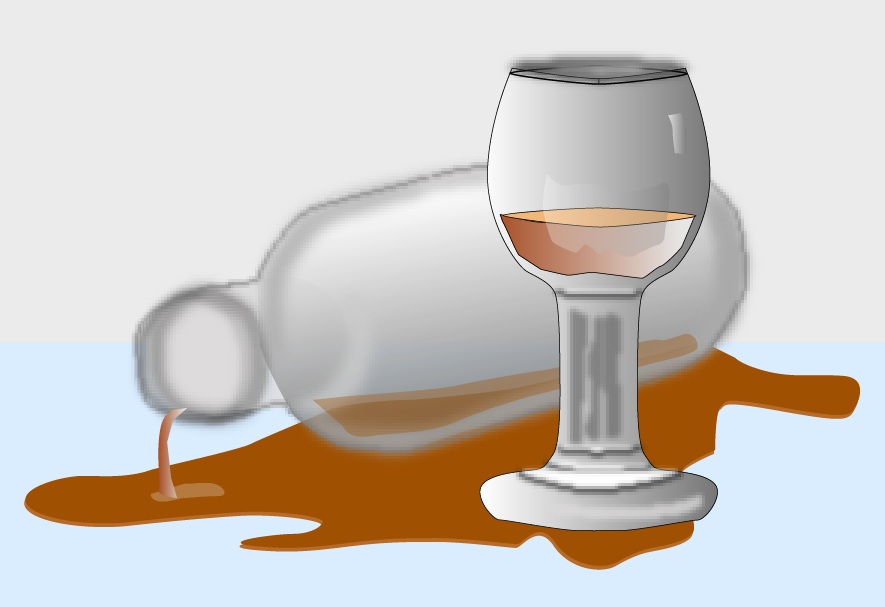 Unfortunately, possibly as a result of the slight over-consumption of brandy, my mind is now a complete blank regarding the solution I found. And to be honest, the kitchen was such a mess when I woke up this morning that I couldn't even tell which polygonal cake tin I had used to bake the original cake! Can you help? The best regular polygon to start with, the minimum number of pieces required and a simple diagram should help jog my memory.

I'll start with a star-shaped cake which is a regular polygon. After 3 cuts the 6 parts can be arranged into 2 hexagons. 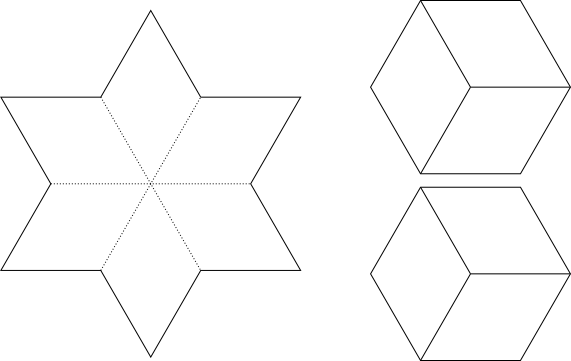 In the second step again 3 cuts are performed and the parts are rearranged to 3 triangles. If aligning of the parts before cutting is allowed the 3 cuts can be performed as a single cut as well. 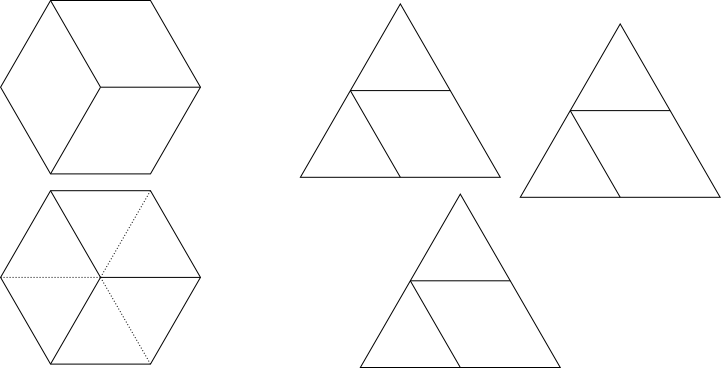 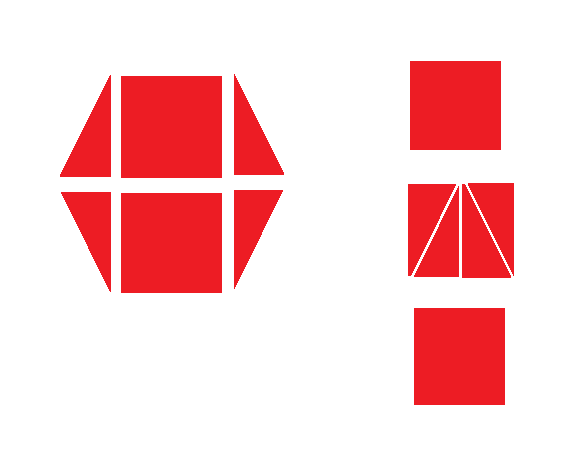 but if I'm wrong:

I'll be like his aunts and go down with my ship.