A game with 52 cards

Question: What is the smallest value of $x$, for which Bob can still avoid (with absolute certainty) to lose any money?

Bob picks a random permutation of the deck and then rotates the subset of his deck that does not match Alice's. The worst case is when the whole deck is a rotation of his initial permutation, in which case he has to rotate 51 times.

I think the worst case scenario is 52 tries. That scenario is where each guess (until the last) is completely wrong. Your first guess is shifted by 1, and subsequent guesses are just shifting the cards, but in the wrong direction. On the 52nd guess, all the cards will line up. Since you can disregard the last guess (you know the guess), Bob has to pay 51 Euro.

That's an unlikely scenario, since you're likely to make some right guesses during that time; you just skip over those cards when shifting.

If we can agree that not knowing a card is always less informative than knowing a card, then I guess we can show the lower bound too. I'm not exactly sure how obvious this assumption is.

A lower bound is

Alice's adversarial strategy will be to say that a card $a$ is in the correct position $b$ only if she has to, i.e., $a$ and $b$ are adjacent only to each other in $G$. Then an edge is only ever removed when either Bob guesses it or it is impossible. Call a card elusive if it has only ever had adjacent edges removed through guesses by Bob, not because they were impossible. Call a connected component of $G$ elusive if all of its cards are elusive.

When Bob finally knows the correct order, only one perfect matching of $G$ remains. By the claim, there is some elusive card $a$ which has degree $1$ but has only ever had adjacent edges removed through guesses by Bob, requiring at least $51$ guesses.

The optimal worst case it requires

To show that, Try the game with 2 cards, let's call them A and B. In the worst case;

would be the first try. So Alice would not tell anything since no match up is available. In the game rule it is stated that;

The game ends, as soon as Bob knows the positions of all the face-down cards in Alice's row. Bob then receives xx Euros from Alice.

So before the next game begins, Bob knows the positions and he gets the money, which should be 1€ at least! So with two cards, 1 try is enough to find at worst optimal case.

Then no response from Alice; Next try will be (unluckily)

Then Bob knows all face down cards automatically, so 2 tries would be enough. Then 2€ for 3 cards.

For 52 cards it has to require 51 tries and 51 Euros at the worst optimal case! At worst case, Bob will strangely never find any card until the last try, which is kinda very low chance!

The smallest value of x, for which Bob can still avoid (with absolute certainty) to lose any money is:

He starts off knowing Alice's order is one of 52! orders. Let us imagine Bob can keep a list of this vast amount of orders. When he pays €1 he receives some information: "these positions are correct and the rest are not". He now deletes impossible orders and will have a smaller number of possible orders left - those forming the intersection of those orders that match at positions he has matched so far and those that do not match any of his attempts so far at positions he has not yet matched.

...then he will receive some information he already knew (he knew that card did not go there) and hence will, in expectation, reduce his list of possible orders by less than if he avoided doing so.

Furthermore, since he will know Alice's order if he matches all but two positions, he should

...as there is a chance he will get this information for free. Note, however, that this does not affect the worst case performance, but does affect the expected performance (see this follow up question).

One way, and by far the easiest, to assure he avoids all four of these scenarios is the cycling unmatched cards method given by Carl Löndahl.

As an example of the fourth point one can compare Carl's method with choosing the first of the possible orders when they are listed in lexicographical order for all cases of a four card game. If we label Bob's starting choice as (0,1,2,3) and have him cycle leftwards, then his costs for each of the 24 orders Alice could choose are: 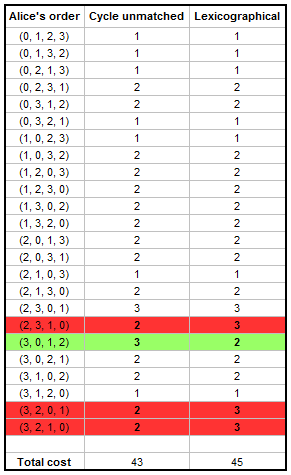 When using the first lexicographically listed order, when Bob does not match any in the first round using (0,1,2,3) then his next round choice will be (1,0,3,2), which, while being a possible order, happens to be two pairwise transpositions of his first round attempt. This helps him in one of the two worst cases he would experience from cycling unmatched cards (if he was cycling rightwards it would help him with the other instead), but hinders him in three cases. The worst case scenario is the same, but the expected cost rises from $\frac{43}{24}$ to $\frac{45}{24}$.

Not the answer you're looking for? Browse other questions tagged mathematics strategy combinatorics game or ask your own question.