This is the second in a series of Unsolved Mysteries posts. These posts explore current unsolved real-world puzzles. Since these have been unsolved for years, it's uncertain whether anyone on on Puzzling.SE will be able to find a solution, but we do have a lot of brilliant minds here...

In 1988, as a new headquarters for the American Central Intelligence Agency (CIA) was being built in Langley, Virgina, sculptor Jim Sanborn was commissioned to create artwork for the courtyard of the new building. He designed a large copper monument, shaped somewhat like a flag, and engraved with hundreds of letters -- an encrypted message: 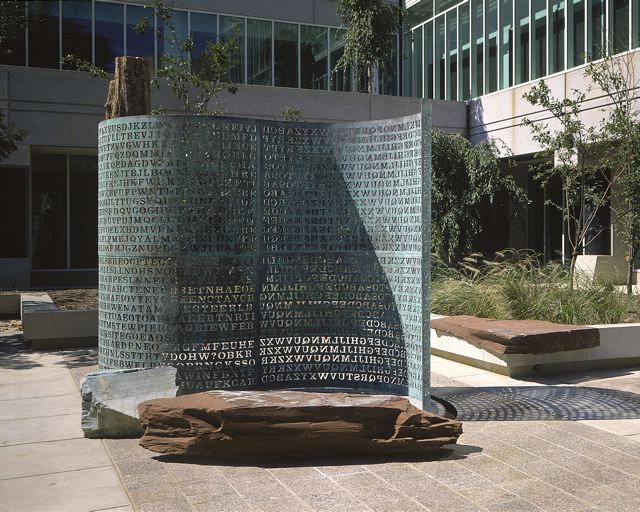 A soon as the sculpture was revealed, codebreakers both at the CIA and in the general public went to work on the puzzle. In 1999, a computer scientist named Jim Gillogly announced that he had solved most of the puzzle. There were four distinct parts to the code, and he had managed to solve the first three.

The fourth section of the code remained unsolved, and to date, no one has brought forth a credible solution for part 4.

The "tableau" on the sculpture has two sections. One side has the encrypted text, and the other is an alphabet table of sorts. (image credit: kryptosrevisited.com) 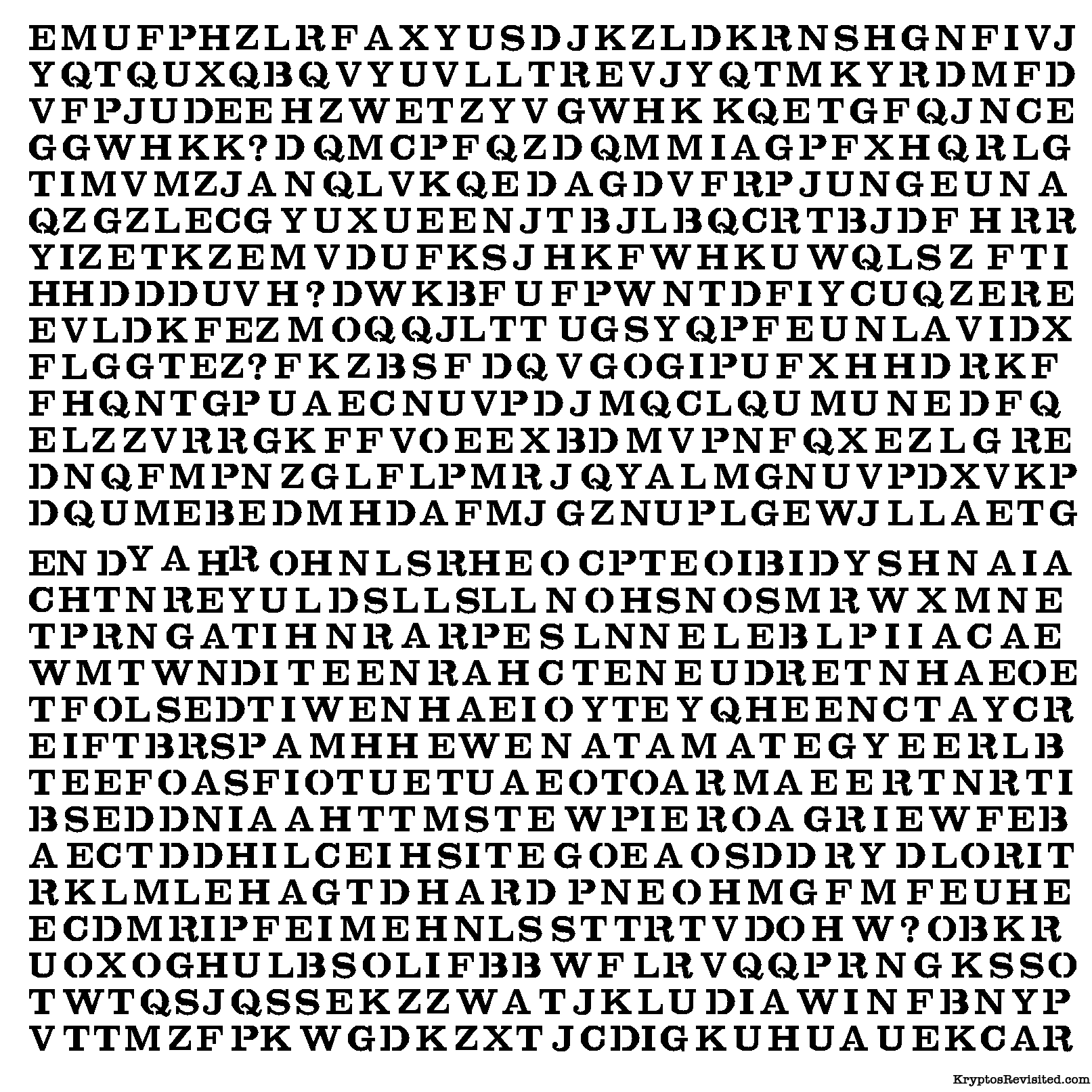 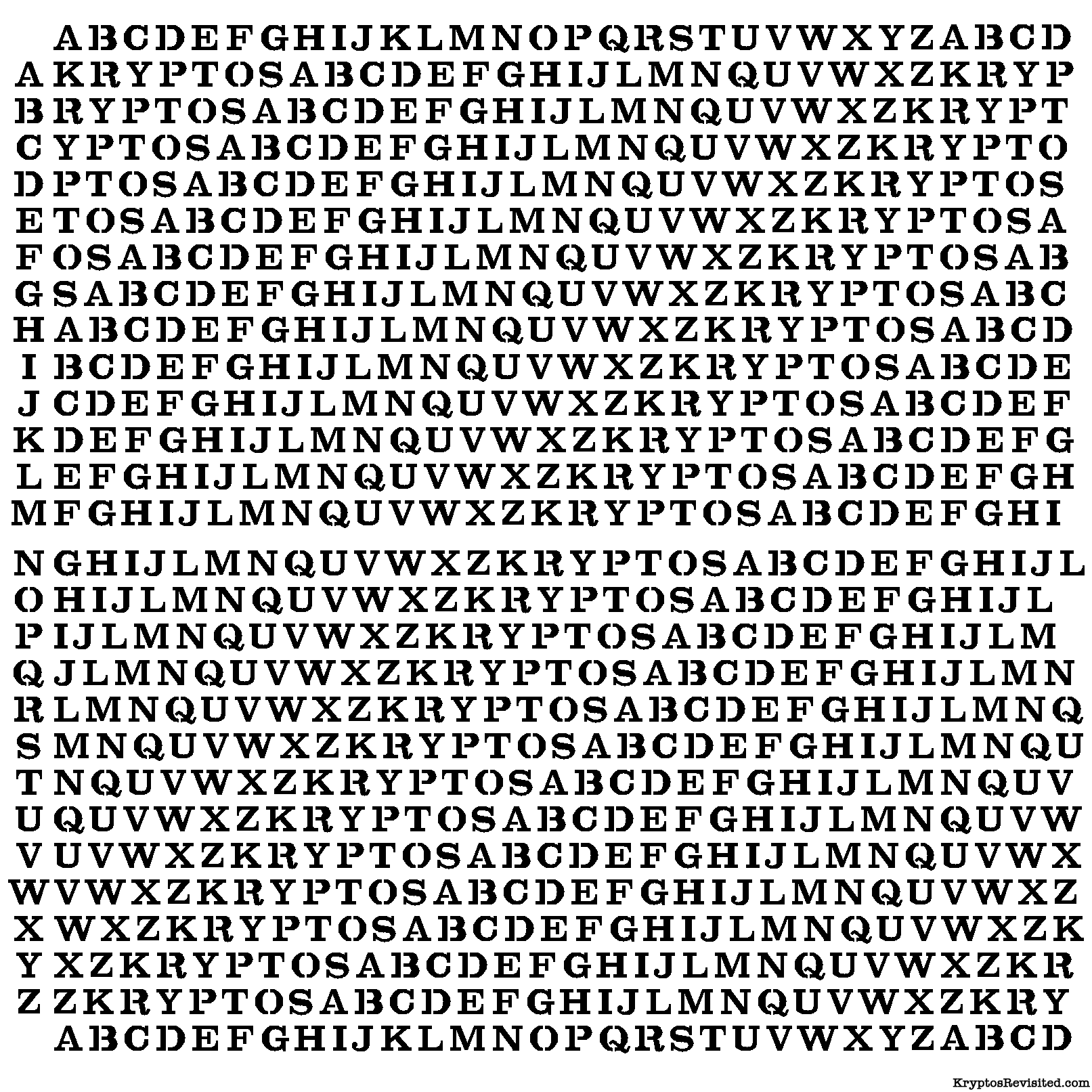 Other components of Kryptos

In addition to the copper sculpture pictured above, the artist created various other visual elements that are part of the same installation. There is a pool at the base of the sculpture, and a bench. There are also various large slabs of stone strewn about the area with various Morse Code messages. It is unclear whether these messages are related to the solving of the Kryptos cipher or whether they are simply adding to the artistic aspect of the sculpture. The Morse messages are as follows (some run right into the ground, so the text in brackets is a guess):

Note: This section contains spoilers regarding the first three sections of the Kryptos code. If you want to try to solve these yourself, do not read this section. These are provided here to help set the context for the fourth (unsolved) section of the code.

Though it was only discovered by solving Part 1, the ciphertext for Part 1 comprises the first two lines of the encrypted text:

It was encrypted using a Vigenere cipher, with a key of PALIMPSEST and the modified alphabet depicted on the second tableau.

(A palimpsest is a document (often vellum, but possibly parchment or paper), which has had its original text erased and has then been written over with new text.)

To decrypt the text, we reverse the process that was used to encrypt it. First, write out the keyword repeatedly underneath the ciphertext:

Then use the Kryptos alphabet tableau to look up the decryption for each letter (note that we ignore the top row and left column as depicted in the tableau above):

For the next letter, we find A in the leftmost column, and follow it to the right until we hit M, then up, ending at E.

Continuing on in this way, we end up with the following decryption:

With spaces and proper case:

The ciphertext for Part 2 comprises the remaining text in the top half of the tableau (until the break halfway down, i.e. lines 3 to 12):

It is solved in exactly the same way as the first part, except that it uses the keyword ABSCISSA instead of PALIMPSEST

It was totally invisible. How's that possible? They used the Earth's magnetic field. X
The information was gathered and transmitted undergruund to an unknown location. X
Does Langley know about this? They should; it's buried out there somewhere. X
Who knows the exact location? Only WW. This was his last message: X
Thirty eight degrees fifty seven minutes six point five seconds north,
Seventy seven degrees eight minutes forty four seconds west.
ID by rows.

Some years after this was originally solved, the sculptor Sanborn made it known that there was an error in the ciphertext, where a single character had been omitted (right after the word "west" on the second-last line). He assumed that it would be obvious to a solver, because it would cause the remaining text to decipher into gibberish, but by what seems to be coincidence, the text actually deciphered into the phrase "ID by rows."

It has since been determined (and confirmed) that the correct decryption ends with XLAYERTWO instead of IDBYROWS.

The ciphertext for Part 3 comprises the majority of the bottom half of the tableau, up to the ? character on the fourth-last line:

This turns out to be a very different kind of encryption. It uses a transposition cipher which doesn't actually change any of the letters, but simply rearranges them. The task is to find the method used for the rearrangement.

There have been many different attempts at explaining the transposition, but none seem especially intuitive. Suffice it to say that it is possible to split apart and recombine the letters in such a way as to reveal the following plaintext:

Slowly, desparat[e]ly slowly, the remains of the passage debris that encumbered the lower part of the doorway was removed. With trembling hands, I made a tiny breach in the upper-left-hand corner, and then, widening the hole a little, I inserted the candle and peered in. The hot air escaping from the chamber caused the flame to flicker, but presently details of the room within emerged from the mist. "Can you see anything?" Q ?

The ciphertext for Part 4 is the remaining 97 characters on the tableau:

Most Kryptos fans assume that decrypting it will involve some combination of the methods used for the first three sections. To date, no one has been able to solve it.

Will you be the first?

There is a plethora of information about Kryptos on the web. A great place to start if you want more information is Elonka Dunin's Kryptos Page (especially the FAQ).

Like all of my Unsolved Mysteries puzzles, I will give a 500 rep bounty to anyone who manages to find a credible solution. Alconja and question_asker have both agreed to match this bounty, so the total bounty is 1500 reputation.

This is not a solution, only a potential step along the way recently proposed on the Yahoo group by void solid and extended by dankuda. I'm reposting it here in hopes that someone can take it another step forward.

Take the text of K4 and split it on W's:

This gives us two strings of exactly the same length. Now, lets check the letter frequencies in each string:

There are exactly the same number of letters of each frequency in each string! This looks to me like more than mere chance, but I'm not enough of a cryptographer to know where to go from here.

Of note, it's been officially stated that NYPVTTMZFPK (the last 11 characters of the 5th string) will decode to BERLINCLOCK.

There's an additional argument for this being the right first step. One of the stone strata that make up the extended Krpytos installation has the following Morse code on it (mostly in pairs):

If you apply the same even/odd logic to this, you end up with:

The letter frequencies clearly doesn't match here, but since they produce same-length strings, it makes sense as a clue to apply the same logic to K4 (as I did above).

8
A geometric transposition cipher
4
A binary puzzle from 1950
12
Cyclical Vigenere poem!
34
Unsolved Mysteries: Magic Square of Squares
8
How to solve a Vigenère cipher?
12
Message for You:) #2
1
How to create a code ring for 2 separate encryptions?