Two Blindfolded and disoriented near the Great Wall of China

Following on from the recent blindfolded near the great Wall of China puzzle.

This time, two wise guys are blindfolded and disoriented and standing together exactly 1 mile from the Great Wall of China. they need to reach to Great Wall as soon as possible.

They move exactly 1 miles/hour (no less or no more) and they can communicate with a transmitter.

How long will it take for them to reach the Great Wall in the optimally worst case? (both needs to be there at the end.)

Since no one could solve it yet, I want to comment about it: @f" is the closest one to the answer still not the best optimal worst case!

If noone could solve in 2 days, I will share the real solution.

If at any point during this strategy one person encounters the wall, the other person stops whatever they were doing and instead walks perpendicularly directly towards the wall.

Diagrams: green circle shows where the wall is found, green diamond is where the other person reaches it. 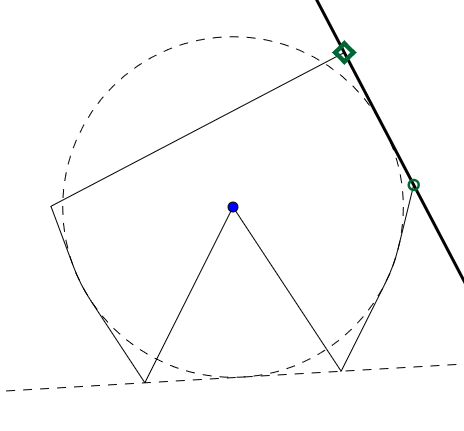 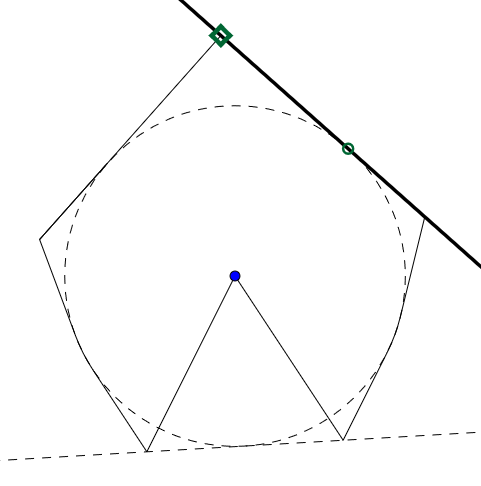 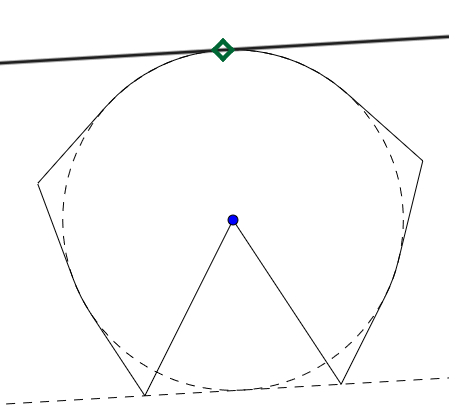 Name the starting point $A$ and the unit circle $O$. Suppose that the people are following paths that are mirror images across the x-axis. Call the horizontal tangent ($y=-1$) $l$. Suppose the wall (call it $w$ is at an angle of $\theta$ to the vertical. Consider which choice of path minimizes the time so that:

Note that if we let $v$ be the reflection of $w$ across the x-axis, the time for the last step (second person moves to $w$) is the same as if the first person moved to $v$ instead.

Now what is half the length of the shortest path that passes from $A^\prime$ to $A^{\prime\prime}$ while staying outside $O$ and $O^\prime$? 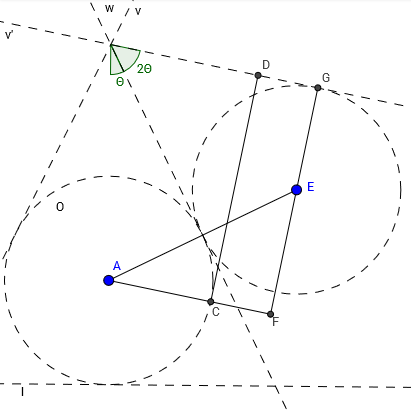 A slight improvement on Electric_monk's answer:

each one starts off 90 degrees from eachtother for $\sqrt2$ miles straight. Then they walk for 1 mile straight in such a direction so they are exactly 2 miles apart and on opposite sides of the starting point, then they follow the circle of radius 1 mile until they meet each other. Like this: 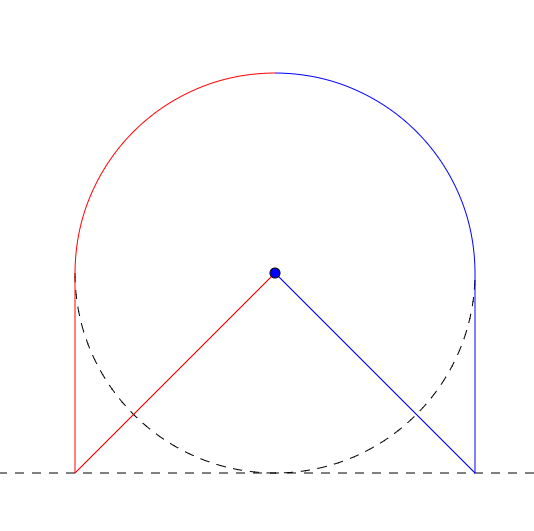 I believe the worse case is here when they are the 2 miles apart and one of them finds it, which means that the answer is $1+\sqrt2 +2 \approx 4.41$

They walk 1 mile in the same direction, then one walks clockwise and the other walks counter-clockwise along an arc of 1 mile radius. Worst case: They started parallel to the wall. In which case, one of them would reach the wall when he completes a quarter circle and then the other would have to walk 2 miles to the first guy.

The other answer is shorter, but relies upon both being able to hold a very precise arc while blind. If they can do that, great, however walking in a straight line may be easier.

They can walk the complete bounding box of a 1 mile radius circle in that time:

In the worst-case scenario, the wall will be encountered at one of the corners reached at the end of the 4th hour. The other participant will need to walk 2 hours to reach that spot.

It will take them 6 hours, 8 minutes, and 30 seconds (Pi+3 hours). I'm assuming that they are capable of traveling in a perfect arc.

Both travelers walk in opposite directions away from each other for one hour. In the best case scenario, one would reach the wall at this point and radio the other. Otherwise, both would head clockwise around the circle. In the worst case scenario, the wall was immediately to the left of one of the wise guys and the other one has to walk half the radius of the circle (taking Pi hours) to reach the wall. They then radio the other, who is on the other side of the circle, to traverse the diameter back.

1 hour to reach the circle, Pi hours to traverse half the circle, 2 hours for the one who didn't reach it to cut back across; Pi+3 hours.

I think both of them can reach the wall in less than 4 hours.

For starters, they begin to walk in the opposite directions. Let us name them as $c$ for closer one and $f$ for further. 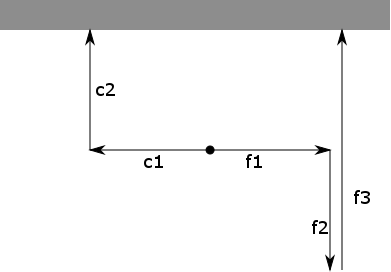 If neither finds the wall after 1 hour, then both of them again turns 90 degrees in the opposite directions and walk 1 more hour.

Case 2.1
If the $c$ heads in the right direction, then he will find the wall less than 1 hour. $f$ will compute the angle of his direction, correct his direction and walk through the wall, which will take less than 2 hours. 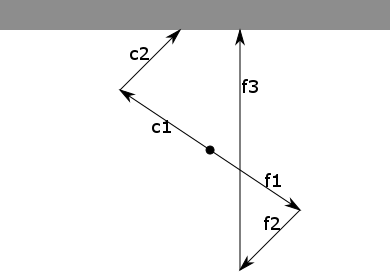 Case 2.2
If $c$ again heads in the wrong direction, he will not find wall after 1 hour. However, now $f$ will be closer to the wall. $f$ turns another 90 degrees and keeps on walking. $c$ waits $f$ to reach the wall, and then himself walks through the wall. 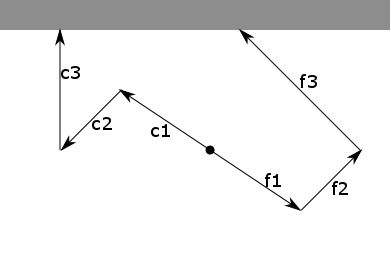 NOTE: Before checking out the solution of this one, please check the original question first to figure out this one.

First of all, this question has totally different type of solution than recent blindfolded near the great Wall of China puzzle. I will explain the solution as simple as possible and step by step since the solution is longer.

I believe the idea is clear at this point. Let’s come to the solution: 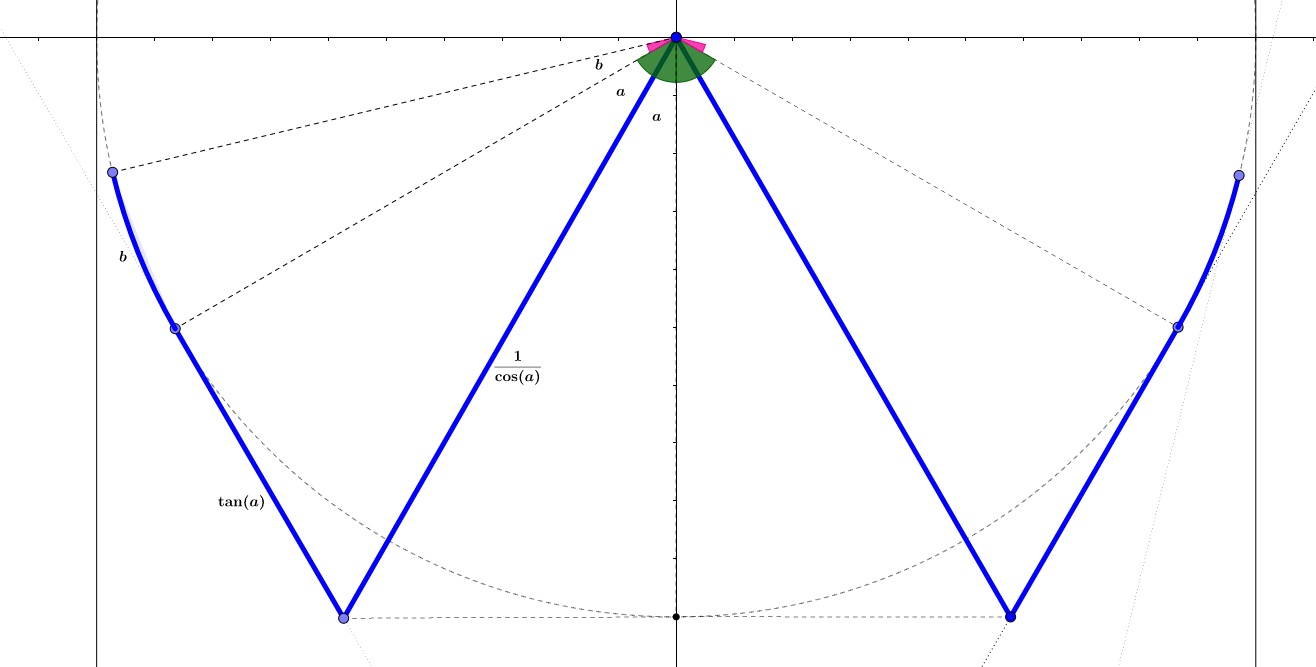 In this question, I tried to explain where cosine and tangent comes from on the Figure 1. Since those are basic maths, I will not get into much detail here and in the further. But this equation explains itself well and please ask if you still do not understand any equation/figure later. As a result;

You may see the result here: Wolfram Alpha Solution for minimum a

The total distance they moved from the beginning to the end can be found easily from the figure:

So after taking the fastest way to the arc again, how much you need to move on the arc? That part is the hardest part since you need to start to consider the distance between these guys now!

These guys is supposed to move on the arc and move on the tangent after a while to complete all possible points on it, but now they need to consider the distance between them and the perpendicular distance of the wall of the other man as well: 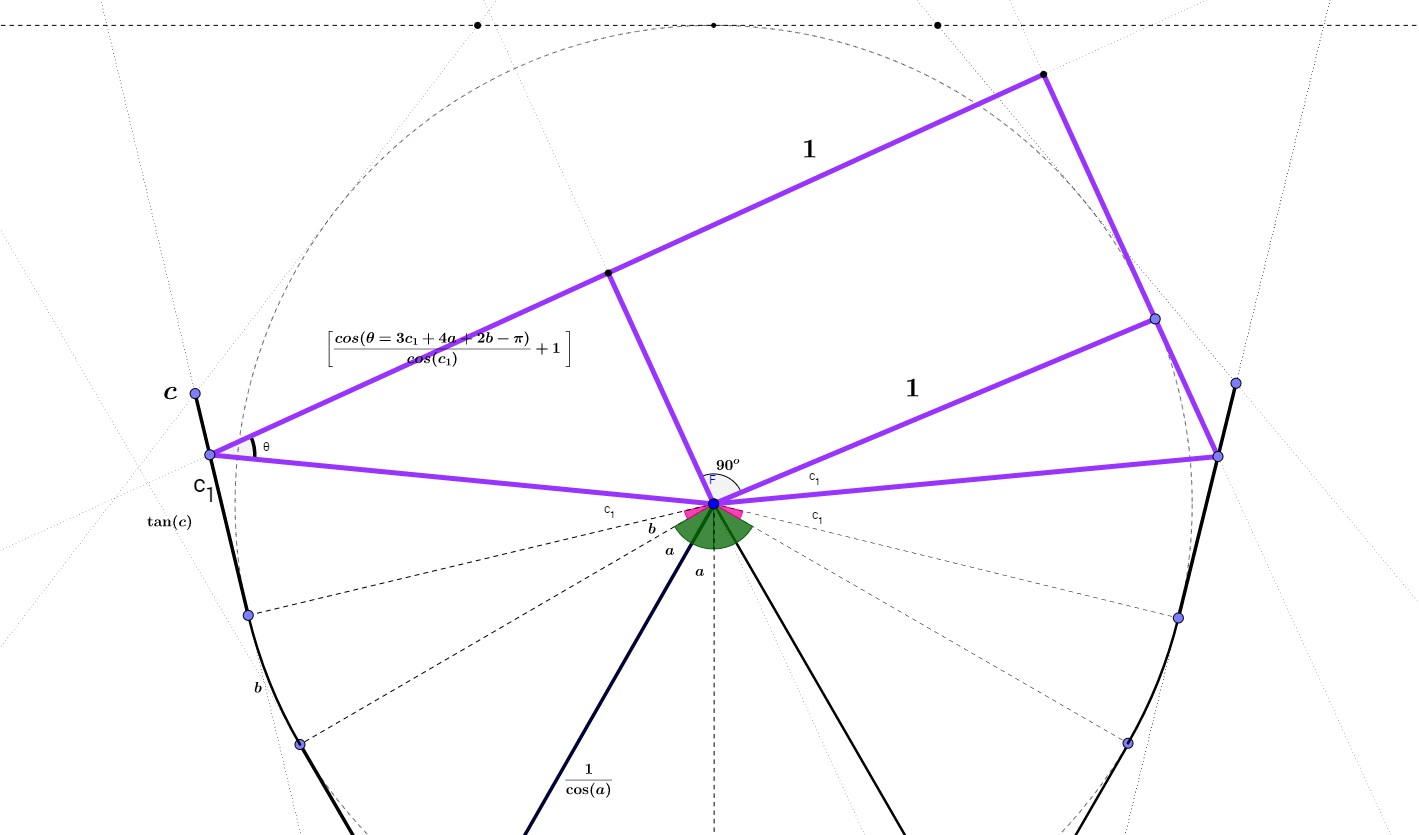 In F2 (please zoom into the figure), c represents the distance you are planning to take on the tangent and after that point you will move back to the arc again.

Why do we need to move on the tangent again? The reason is actually secure the distance between these guys, even it seems the distance is getting bigger, it is not since you cover faster than moving on the arc.

And $c_1$ represents while moving on the tangent to $c$, what would be the distance to the wall if the other one finds the wall: We have to consider every single point on the way to $c$ point. To do that, we need to minimize $b$ where $c<c_1$ and $c1<\pi/2$;

As result: Wolfram Alpha Solution for b

Before explain what c should be, we need to consider point d in that part to minimize the distance between these men as below: 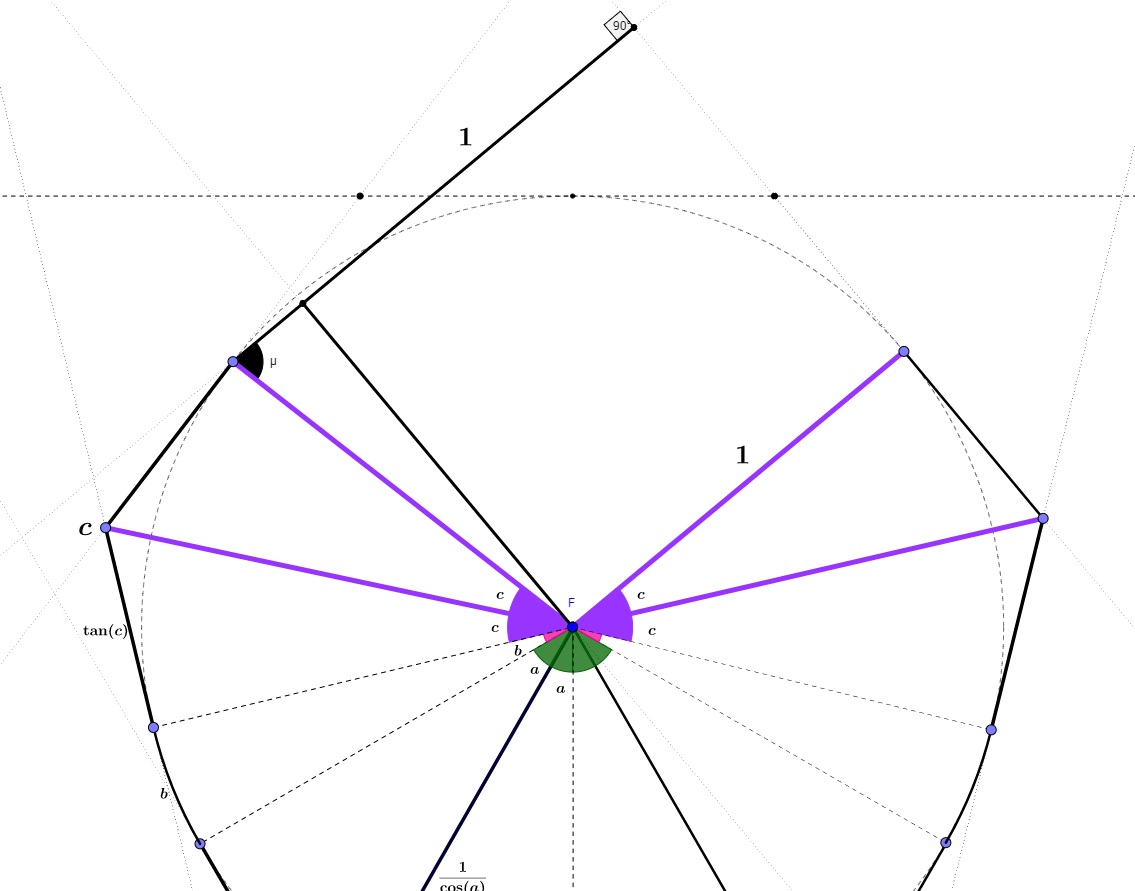 In Figure 3- you will notice a dark angle ($\mu$), if we can find that angle, we can find the perpendicular distance to the wall when a man encounter the wall just after finishing the arc move after $c$, so;

as a result the total distance to the wall included everything;

we know $a$ and $b$ and if we minimize it with wolfram alpha: Wolfram Alpha Result for $c$ as a minimum

Since we have found the best $a$,$b$ and $c$, let's find out the worst case from this route. Actually there is two critical points where you can find the worst case, one of them is in between $b$ point and $c$, the other one is point $d$:

40
Blindfolded and disoriented near the Great Wall of China