Day and night of the two timers 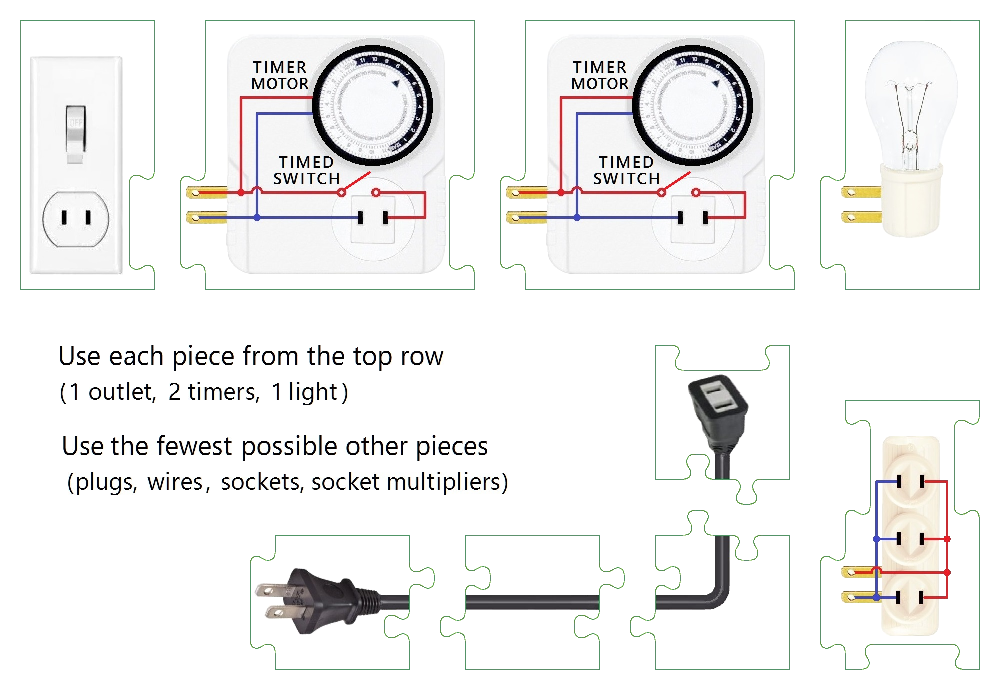 Specifically, devise schedules and an arrangement for two electromechanical 24 - hour light timers to control the flow of power from an outlet to a light bulb. The challenge is to obtain the following repeated lighting pattern with the largest possible number D, while N is a nonzero constant other than  24 −  D , beginning when the outlet's power is switched on.

To reduce complications:
🕛  When power is initially switched on, both dials point to midnight
🛇  The timers may never simultaneously be at transitions in their schedules (from OFF to ON or from ON to OFF, whether the same or different between the timers) even though the power switch may initially turn them on simultaneously 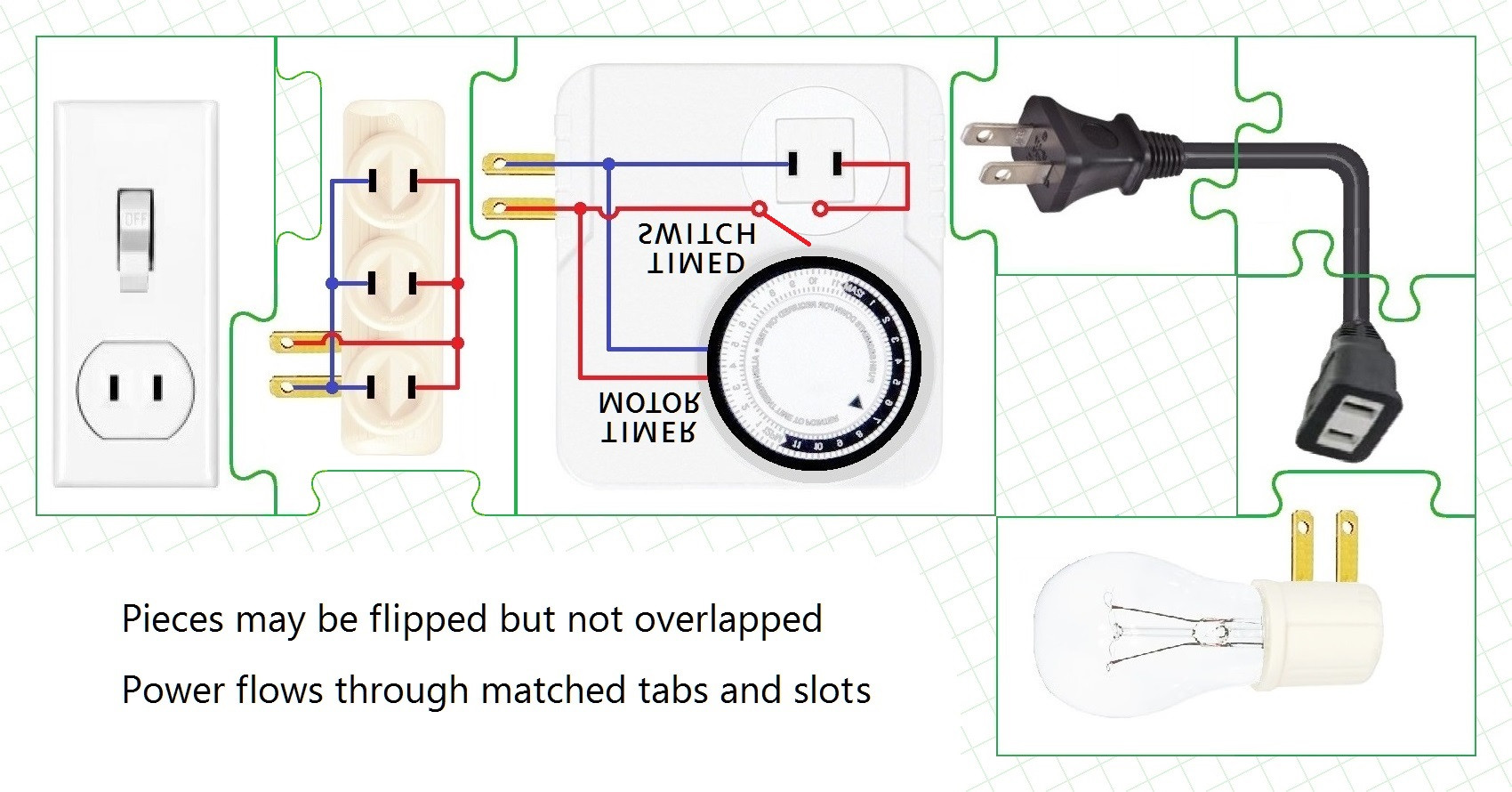 The example above shows much of what is allowed, although one timer is missing.
•  Use 1 outlet, 2 timers and 1 light bulb
•  Use the fewest possible plugs, wires, sockets and socket multipliers
•  Pieces may be flipped and rotated but not overlapped
•  Any number of tabs and slots may remain unlinked
•  The layout may include uncovered areas
•  Power flows through matched tabs and slots
•  The outlet is the sole source of power
•  When a timer is in an OFF interval power can only flow into into it, not through it

(This puzzle comes directly from an actual botany experiment)

Small hint — a possibility implied by these pieces' old-fashioned circuitry:

Big hint — another possibility implied by these pieces' old-fashioned circuitry:

A timer is not strictly a one-way device. When a timer is in an ON interval, power may flow in or out through both its plug and its socket. If power flows in only through the socket:
•  The motor rotates the dial forward along its schedule
•  The timer cannot reliably advance itself into an OFF interval, so (1) the intervals during that portion of the schedule must all be set to ON and (2) power must be supplied through the timer's plug before and during the next OFF interval

I'm not entirely sure that my interpretation of how the backwards timer works is entirely correct, but if it works like this:

When the timer is ON (in a time interval where the switch is closed), then the light can be powered in reverse (supplying power the "wrong" way).

Then I think I can get

Here's the diagram (pardon the mess):

Which involves 2 socket multipliers, 1 wire (male-to-male), and the outlet-timers-light setup.

(For extra clarity: the outlet is plugged into timer A (in reverse) and timer B (normally. The other (pronged) end of timer A, the other (output) end of timer B, and the light are all connected at the same socket multiplier.)

In this setup, the light will be on when either timer A OR B is set ON, and only off when both A and B are set OFF.

Here's how we'd set the timers, and what would happen:

This basically puts timer A on a 32 hour cycle, since it will become unpowered for four hours at 2am and 2pm every "day". And since timer B is essentially on an 8 hour cycle, it behaves exactly the same through each cycle of timer A, we don't need to worry about them becoming de-synced.

The 32 hour cycle of timer A is below. I've put dots above each hour when timer B will be off, and parentheses around all the hours that timer A will be off; the light bulb will be on only when these coincide (the hours indicated by a hyphen).

The biggest I can get for now that should fulfill all conditions:

Only using the four pieces of the top row (and ordering them exactly like in the top row) we set the following on-states:

We start with an on-time for 10 hours.
Afterwards timer2 is set to off and timer1 will be on for 1 more hour(since they aren't allowed to switch states at the same time)

Rig the circuit up like in the first picture:

This obviously works because one timer acts as a wire and the other as a 11-on, 1-off timer with 12-hour period.

I claim that no period of daylight over 11 hours can be done with a non-24 hour cycle.

First, let's look at the possible circuit diagrams up to circuit topology (assuming that the timers are connected to the main circuit at both sockets).

A timer is denoted by this: ▬

The socket is denoted by this (because it's basically four equivalent plugs, we can use double-plug or double-socket wires to fix non-compatibility problems): ┼

The light and the power switch are denoted by this: ╘ ╛

So - the possible diagrams

Let's work backwards. The 5th diagram shows the light being completely on - $D=\infty$, $N=0$ (but I don't think that counts). The directionality of the timer doesn't matter.

The 4th diagram shows the light always on as well - $D=\infty$, $N=0$ (again, I don't think that counts). And again, directionality doesn't matter.

The 3rd diagram shows one timer being bypassed - so the light is dependent on only one timer. This can give us at most $D=11$, $N=1$ (given how we set the non-bypassed timer). If the non-bypassed timer was backwards with respect to the image at the top of this post, it wouldn't reliably be able to turn itself off and the light would be constantly on.

Finally, we have just one circuit to work with - the one with two timers in series. None of the timers can be backwards because otherwise they couldn't reliably turn themselves on/off and they wouldn't be able to switch out of their initial state-leading to either a one timer problem ($D=11$, $N=1$ best) or a permanently fixed state light.

First, the two timers each have just one ON period (maybe spanning 24-1) - we will now prove this.

So - what is the point of the first timer having an ON period without the light actually being on? To advance the second timer! But if that was the case, we could just tack the length of the 'useless' ON period onto the end of the previous period - this actually reduces or keeps the same the amount of collisions between the first and second timers switching on/off at the same timer.

The computer search didn't return any results with $D>11$.

I do realise how the motor works now, so the impossibility proof is for posterity.

Not the answer you're looking for? Browse other questions tagged optimization real time jigsaw-puzzle circuitry or ask your own question.