Tiling an Odd Polygon with Dominoes

There is a polygon whose edge lengths are all odd integers. Prove that this polygon's interior cannot be tiled by dominoes whose dimensions are $1\times 2$.

An example of such a polygon is a "mutilated chessboard," which is a chessboard with two opposite corners removed.

Let $P$ be the interior of some polygon in the coordinate plane with each side length odd, $\partial P$ its boundary (which we give the counter-clockwise orientation). We may assume that every edge in $\partial P$ is parallel to one of the coordinate axes, and that the vertices have integer coordinates.

The right hand side of $(\star)$ vanishes on the horizontal edges, and on each vertical edge of odd length the value is $(-1)^{x+y}$, where $(x,y)$ are the coordinates of the final endpoint of that edge. Between any two consecutive vertical edges, there is a horizontal edge of odd length, so the $y$-coordinates of the ending points of two adjacent edges are of opposite parity, as are the $x$-coordinates. This means $(-1)^{x+y}$ has the same sign for each vertical edge, so the right hand side of $(\star)$ is non-zero.

The proof can be found in this paper (Section 2). 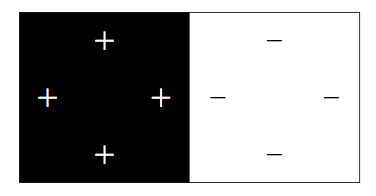 The total electrical charge of the polygon's interior is equal to $4\times(B-W)$. However, the +/- ions on edges between neighboring squares cancel out. The only uncanceled charges are on the perimeter, so the net charge is also given by the black perimeter minus the white perimeter.

Putting this all together, we get that $$ B-W=\tfrac14(\text{black perimeter}-\text{white perimeter})\neq0 $$ so the number of white squares differs from that of black, so a tiling is impossible.

If the polygon is allowed to contain holes, then there are counter examples:

This polygon has only sides of length 3 (outer sides) and length 1 (sides of hole), and it is easy to tile it with four dominoes:

5
Is there a brute-force solution of this puzzle?
25
Tiling a Hexagon with Diamonds
3
Keep the grid differences below $x$
9
Cover the terrace with "slashed" tiles
8
Coloring an n by n grid with four colors
16
Find a heptagon with mirror symmetry that can tile a flat plane
4
Tiling rectangles with Hexomino plus rectangle #3
11
A chessboard tiling with corners removed in 3D