Some examples: Desegregate the Knights and Switch The Knights

You must give two 8x8 chess board positions that have any number of black and white knights.

What is the minimum number of knights required to do so?

All 64 knights are needed, in which case any setup is stuck. We prove that with 63 knights, any position is reachable from any other position.

With 63 knights, the puzzle is much like a sliding puzzle, except pieces slide as knight moves rather than into orthogonality adjacent cells. We can think of a move as swapping the position of the hole and the knight that moves into it.

Rather than having the knights be colored, let them be labelled 1 through 63, similar to the 15 puzzle. As the 15 puzzle, there is an invariant that means only half the positions are reachable: the parity of the permutation (labelling the hole as "64") plus the color of the hole square. Each move swaps the hole with a knight, switching both the parity of the permutation and the color of the hole square, preserving the invariant.

We'll argue that, like for the 15 puzzles, one can reach any position with with the same invariant. First, move the hole to the right spot, then we show that any even permutation can be obtained while keeping the hole where it is.

With three knights and a hole X in a four-cycle, one can have the hole do a lap clockwise to rotate the knights along a three cycle.

With knights 1,2,3 in this formation anywhere on the board, we can always move the hole X to the right place via other spaces to catalyze their rotation, then move the hole back the way it came, so the board is as it started except for those three knights.

One can do the same along other 3-cycle formations

In fact, this lets us rotate any three knights in a path of three that isn't a straight line. Using a knight's tour graph with no straight lines, we can cycle any three adjacent cells in the tour. 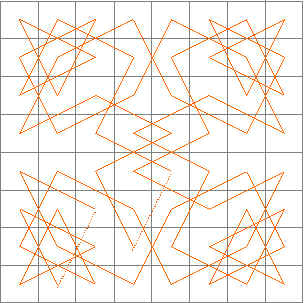 Finally, permutations of three adjacent elements suffices to generate all even permutations, as shown in theorem 3.4 here.

It only remains to show that the invariant doesn't prevent correctly colored knights in the original problem. Since there's either at least two white knights or two black knights, we can always swap their labels to reverse the invariant.

a knight on any square can reach any square on a 8x8 board in a finite number of moves. If you try to block a knight from moving by placing knights in each square it can move to, you must then block the new knights again and again until no knight can move. This inevitably results in the entire board being filled.

that it is possible to swap 63 knights from even one starting position.

Not the answer you're looking for? Browse other questions tagged chess optimization reachability knight-moves or ask your own question.

31
Switch The Knights
22
Desegregate the Knights

7
Seven Impatient Knights
25
Interchanging Knights and Rooks
2
Pawninos-44 Checks In A Row
7
Peaceable Bishops on an 8x8 grid
13
Chess pieces attacking exactly once
7
3 Colors of Chess Pieces Attacking Each Other Once Each
7
Knight Battle: The Face-off
3
Create the freest arrangement of white chess pieces on board by consequently moving your pieces
5
Switching Black and White
9
Interchanging knights and rooks… again!