As a matter of fact, humanity sent a message to aliens with Voyager spacecrafts on 1977. Aliens suppose to decode the message without knowing anything about human race and be able to play attached videodisk.

But is it that simple task for a human? I think this can be an excellent decode-puzzle for you: explain each of 8 pictures from the message. 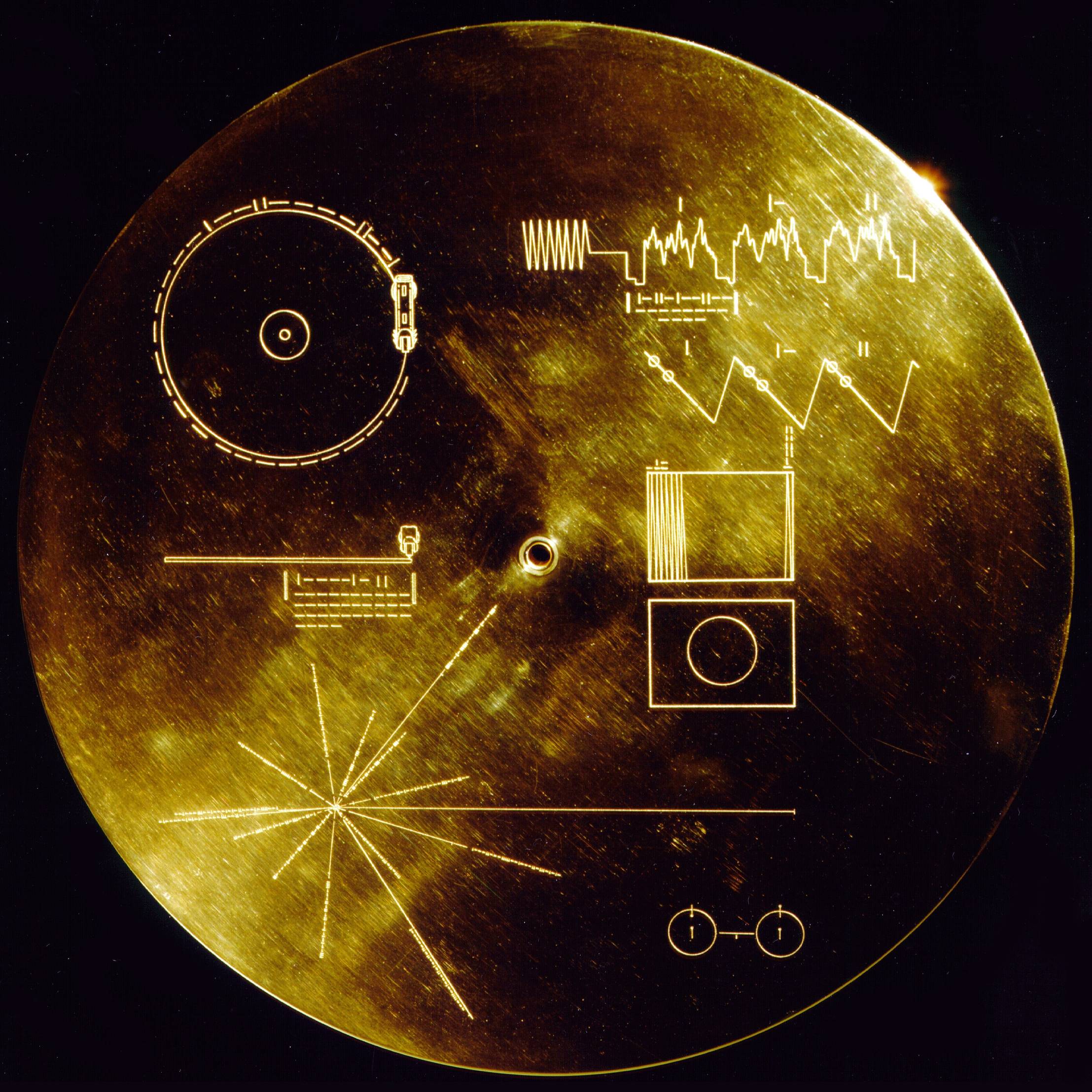 According to wiki the message should contain a instructions in binary code, indicate the location of the solar system relative to the 14 powerful pulsars. As a "dipstick" the hyperfine structure of the hydrogen molecule (1420 MHz) is given. 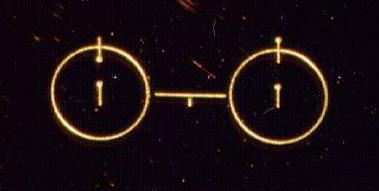 This is one of the more difficult parts. This portion of the record is supposed to pictorially represent

the transition between two states of the hydrogen atom: in particular, the two hyperfine levels of the ground state. The difference between the two states is in the alignment of the electron's spin and angular momentum; on the right the two are parallel, and on the left the two are antiparallel.

The transition between these two states happens at a very precise frequency. The bar between the two states is labeled with a | (1), indicating that this frequency defines the units of time used on the rest of the record: 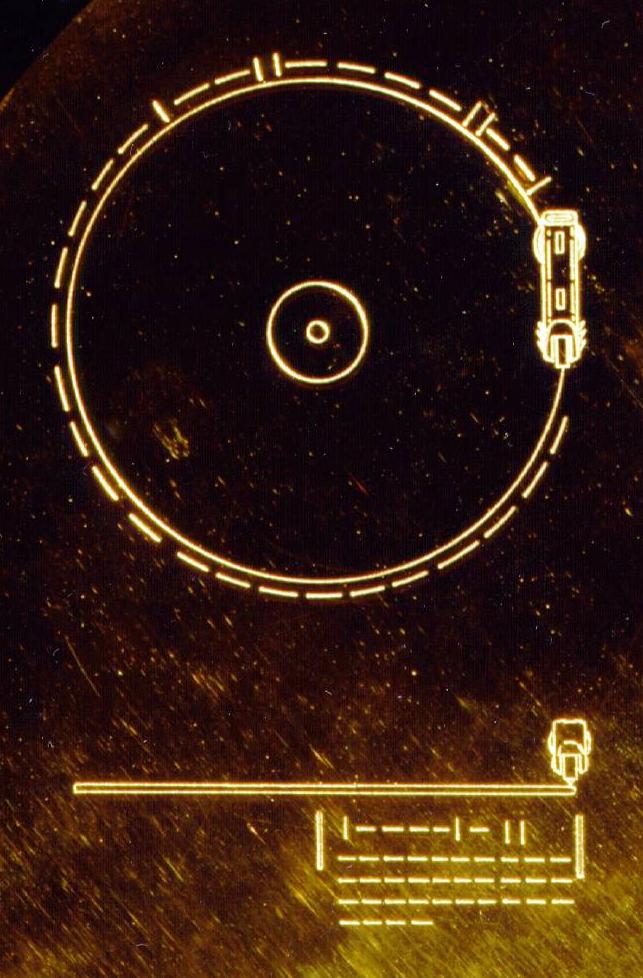 The meaning of these images is relatively simple, they are

top and side views of the record itself, as well as the stylus included alongside the record. They are intended to demonstrate how the record is played.

binary numbers, with | representing 1 and - representing 0. Both encode a duration using the time unit from Part 1.

The audio contents of the record (which I listened to while writing this) consist of greetings in 55 languages, as well as a couple longer snippets from members of the United Nations; whale song (really!); "sounds of the Earth," including natural sounds (e.g. a thunderstorm), as well as manmade sounds (e.g. a rocket launch); and a variety of music from different cultures. 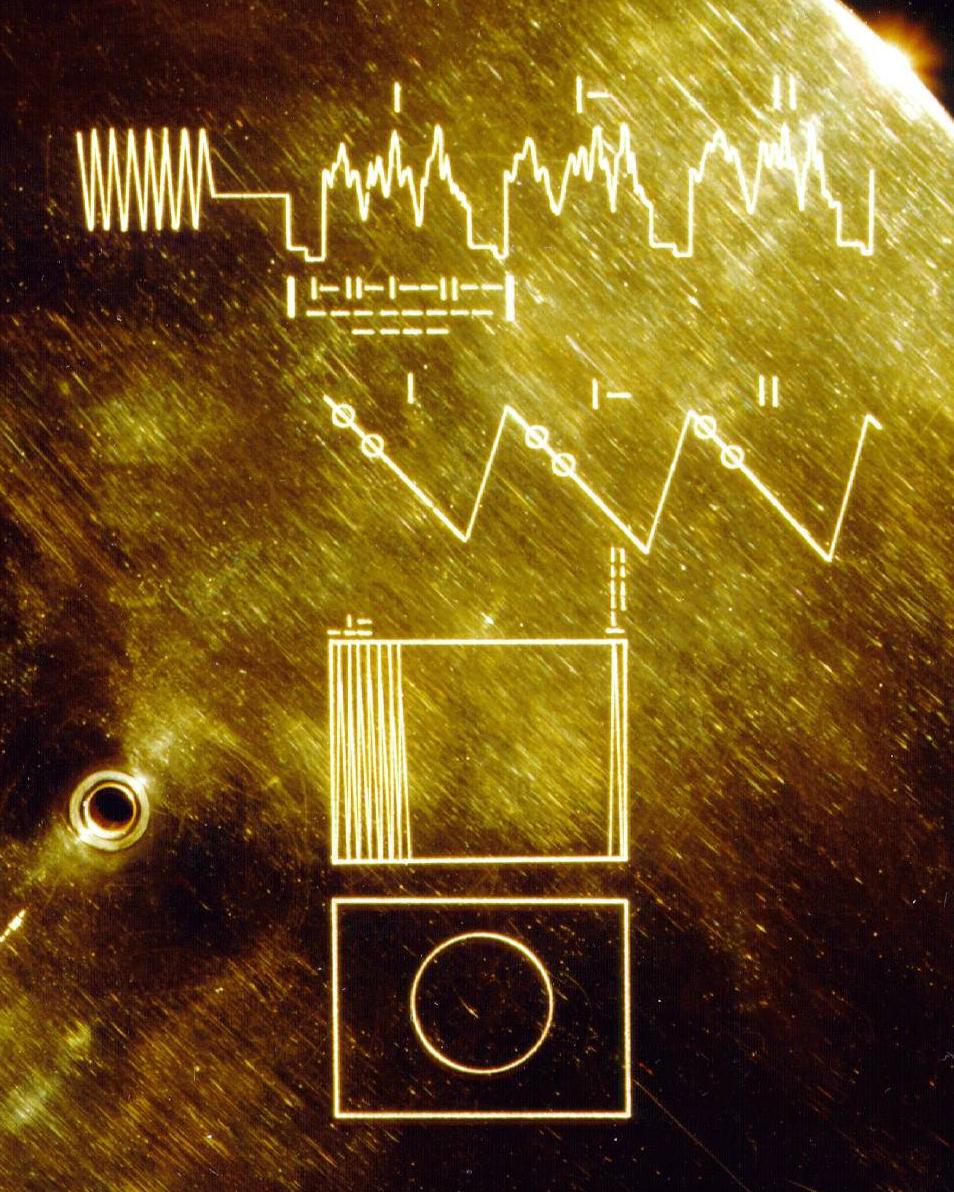 This part is a schematic depiction of

a TV signal, intended to assist in decoding the images stored on the record.

the signal itself, going from left to right. It begins with a beep (probably a vertical synchronization pulse that separates images), then shows three complete lines and the start of one more. The lines are numbered sequentially, | (1), |- (2) and || (3).

Each line begins with a horizontal blanking interval (low period) and then a horizontal sync pulse, followed by the analog video signal representing the image intensity along that line. The first line is marked with |-||-|--||--------------, $723\times 2^{14}~\text{TU}$ or $8.3~\text{ms}$, the duration of one line. (This is several orders of magnitude slower than ordinary video, whose frequencies are too high to record on a record.)

The horizontal location on the screen, going slowly from one side of the screen to the other during the active part of the signal, and quickly returning back during the blanking interval. I'm not exactly sure what the dots are; possibly they indicate the three color components (RGB) of the video signal, or that the video signal is interleaved?

The scan pattern on the screen. They seem to have interchanged the horizontal and vertical components of the signal, since ordinary TV scans the lines horizontally, not vertically. The two numbers (|--- and |---------) indicate the 8 lines shown, and the total of 512 lines per frame.

The first image on the record: a circle (meant as a test pattern).

The images on the record start off with basic mathematical definitions (Arabic numerals in base-10, addition, and fractions); then basic units (including centimeters, meters, and kilometers, seconds, days, and years); a schematic of the solar system; and finally a wide range of humans and human activities. (I based one of my puzzles off of the beginning part of the record's message, actually!)

This is another hard one. The spiky object on the lower-left depicts

A map of the solar system's location relative to a number of pulsars. A pulsar is a class of neutron star, the ultra-dense remnant of a massive supernova. When the neutron star forms, it retains the angular momentum of the original star; but since it is so small (on the order of 10 kilometers), this means that it spins very fast (think of a figure skater pulling in their arms when they spin). For example, the Crab pulsar spins at around 30 rotations per second! A pulsar has a "hot spot" that comes into view once per rotation, so the star appears to flash very quickly. Since neutron stars are still around five times as massive as the Sun, their rate of rotation is very stable over time. This allows us to use them as "beacons," identifiable by the frequency of their flashes.

The lines emanate from the solar system at the center, and represent the relative distance and direction to various pulsars. The numbers on each line encode the period of the pulsar's rotation. In most images of the record it's hard to make out the map very well, so if you're interested in more details about it you should look at this page (in which the author shows that it is possible to use the map to determine very accurately not only the position, but also the date at which the map was produced).