Ok, so I run a play-by-post RPG campaign and I have the following "puzzle" set out for the group. My main worry is that they won't get it so I figured I'd try it here first. Other than solving it, I'd also love it if you could give indications of what got you through it, what things are too obvious, etc. and if you think it's too hard for novice puzzlers :)

I doubted for a while if I should post it here or over at RPG SE, but in the end I feel this is mostly a puzzle question. This is an edited version of the puzzle so that when they google it they wont go immediately here.

Short bit of prestory: It's 27th April 3577 AF, You're an inquisitor in training, in a foreign land investigating. During the night, your mentor suddenly left and all he did was leave you a note. The note is in his handwriting but the content is very much not in his style. You notice there's some odd misspellings in the letter that form the word hidden, and when you investigate further you notice the second letter of each word spells out that you should look in his dresser. In his dresser, in a secret compartment you find another scroll, completely jibberish apart from the top line, and a necklace.

see you again in 12 years

what power lies in words, that a single concept can outdo. present me that which can only truly be spoken by yourself. feed me what I need so I can reveal it back to you.

The first step is to determine the type of the cipher. The site from Simon Singh has a nice tool to determine the frequency of the letters in the cipher text. It also shows the expected count of letters for an English text, which leads to the conclusion that no substitution was used.

Difficulty of this step: easy.

As we don't use a substitution cipher, the next guess is that some kind of transposition is used. There is another nice site for this kind of ciphers. The text has a length of 170 characters. Prime factors of 170 are 2, 5 and 17, so testing the corresponding numbers for rows and columns first makes sense, if we assume that the riddle was designed to be not too hard. Arranging the cipher text in 10 columns and 17 rows gives this table: 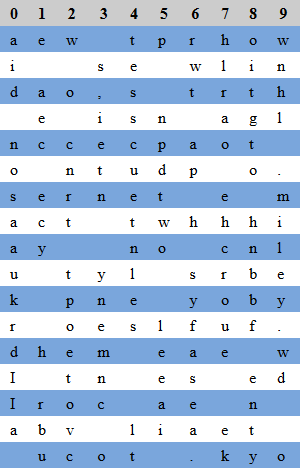 The correct key for this part was already posted in the comments above. Another method to solve this without a key would be to use an anagram solver with an appropriate row. In this case I used the 5th row containing the word "concept". Having most of the columns correct, the rest is then pretty easy: 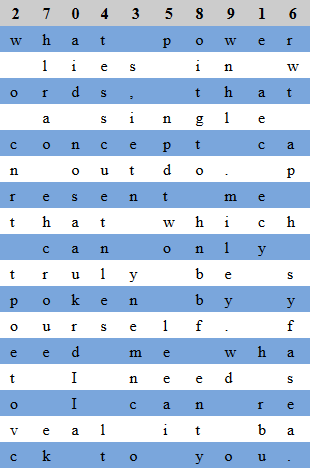 Some other properties of the cipher text can also be used to find out the correct ordering. In the last row the period should be in the last column. Other periods and the comma should be followed by a blank. Making the starting letter of the next sentence a capital letter could be already enough to solve the rest without a key.

The key used is presented as a date in the text of the riddle: 27th April 3577 AF. Adding the 12 years from the note and using 1 and 6 for A and F gives the complete key.

Difficulty of this step: hard to say because of the leaked key in the comments, but I would say medium.

The difficulty rating I've given is of course subjective. There are much harder crypto puzzles on this site. It's also an interesting topic, so I know some simple cipher methods. If your audience never heard of "letter frequencies", already the first step might become unsolvable. Finding the correct number of rows/columns also involves some amount of trial and error. Presenting the cipher text in a correctly sized grid would make the deciphering much easier, definitely too easy if someone made some code cracking before.

12
The inheritance of Mr. Jones
7
Old Computer Text Game Puzzles
8
Who's the murderer?
20
Ricky McCormick's Notes
7
Where in the world am I supposed to go?
16
The Third Room of Numbers Dungeon
15
There's been a kidnapping!
9
Can You Figure It Out? (Chapter One)
7
My Grandpa's Box #1
15
Note of greetingth