A quasi-pangrammatic number is a positive integer whose English name contains at least one copy of each letter used to write all of the positive integers that precede it.

123456789 ("one hundred twenty-three million four hundred fifty-six thousand seven hundred eighty-nine") is a quasi-pangrammatic number: its name contains all letters execept for b, c, j, k, p, q and z, and no other letters are needed to write integers from 1 to 123456788 in words.

The smallest quasi-pangrammatic number is trivially 1 ("one") because there are no positive integers before it.

What is the smallest quasi-pangrammatic integer after 1?

Thanks to @dmg for the correction

Why I think it is the answer?

I wrote a little proramm to check the numbers from one to one million for this property and there turn out to be 817 such numbers.

I also checked it for German and due to äöüß there is no such number in the first million besides 1, so I replaced them with ae,oe,ue,ss and 721. With the smallest being 12,467, just one below the English one.

Here is a little plot of them: 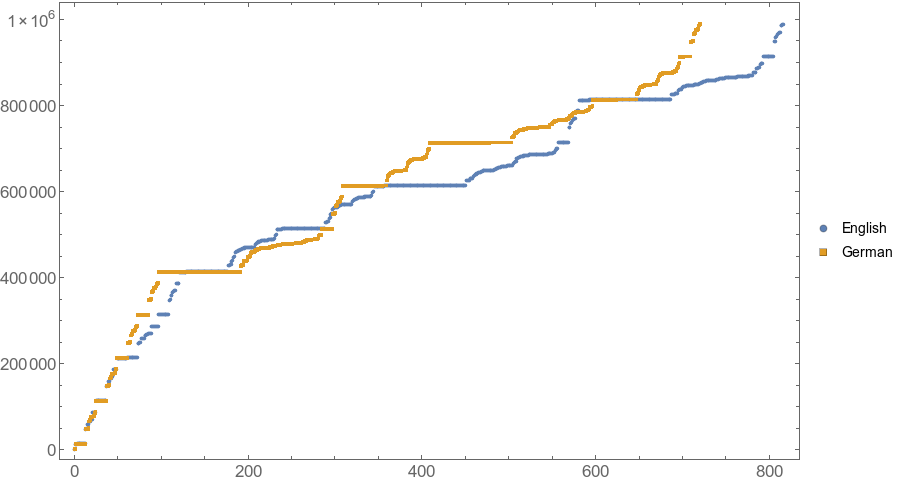 In the meantime I also calculated the smallest German quasi-pangrammatic number using the correct spelling (with äöüß) and it turns out to be 4,512,637

Not the answer you're looking for? Browse other questions tagged english pangram or ask your own question.