Three in a lock

In the 1980s, a German spy was assigned a mission to retrieve a set of important documents kept inside a British outpost. The spy knew that the documents were locked in a safe, which the password was a three-integer-sequence. He had to make sure the password was correct, as the safe was connected to an alarm that would be triggered whenever any unauthorized access was detected.

The German intelligence agency acquired several number sequences from a British traitor. The traitor insisted that these sequences contained vital information about the password. However, he could not figure out what the actual password was; he just knew that A, B, C were the three integers needed to be keyed in, and they were somehow related to a kind of sports.

The number sequences were:

The numbers in Seq.2 can be seen in that sport directly, while those in the other two sequences are not that obvious.

Visual Explanation to the answer 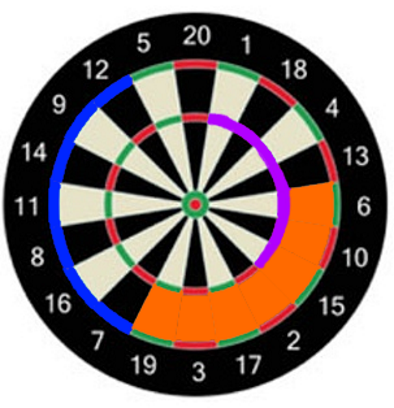 These sequences are found on a

Thanks to Bungicasse for the questions, which helped me a lot.

Sorry I can't comment because I don't have high enough reputation. Is it the whole line of numbers that are seen often or is it the three numbers that is often seen together?

Not the answer you're looking for? Browse other questions tagged lateral-thinking number-sequence story sports or ask your own question.