A simple riddle from the first Harry Potter book. You are in a room with seven potions. There is a doorway ahead and a doorway behind, both engulfed in flames. Which potion will allow you to move forward to the philosopher's stone and which will let your friend back to safety? 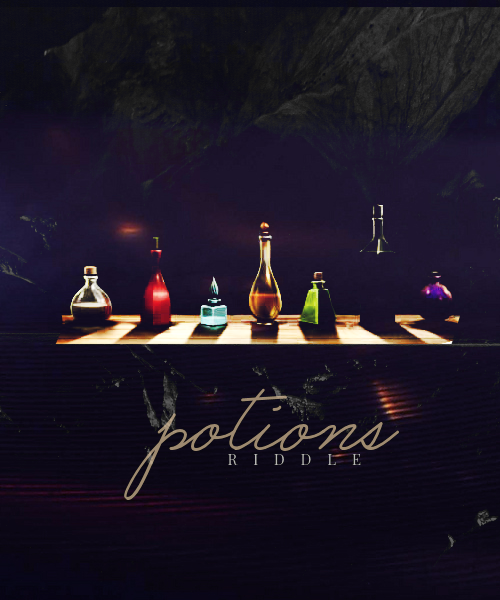 Danger lies before you, while safety lies behind,
Two of us will help you, whichever you would find,
One among us seven will let you move ahead,
Another will transport the drinker back instead,
Two among our number hold only nettle wine,
Three of us are killers, waiting hidden in line.
Choose, unless you wish to stay here for evermore,
To help you in your choice, we give you these clues four:
First, however slyly the poison tries to hide
You will always find some on nettle wine’s left side;
Second, different are those who stand at either end,
But if you would move onwards, neither is your friend;
Third, as you see clearly, all are different size,
Neither dwarf nor giant holds death in their insides;
Fourth, the second left and the second on the right
Are twins once you taste them, though different at first sight.

Per clue 2, #1 and #7 are not the target potion. Per clue 1, #1 is also not wine, as there is no bottle to the left of it. #2 and #6 are neither the forward or backward potion as they are the same per clue 4, and there exists only one of each of those. Therefore they are either wine or poison. Clue 3 tells us #6 cannot be poison (it's the giant), both #2 and #6 must be wine. Per clue 1, this means #1 and #5 are poison. This means that #7 cannot be poison, as it must be different than #1, and cannot be wine, as both of those have been identified. This leaves only the backwards potion. #3 cannot be neither wine nor backwards (already identified), nor can it be poison (dwarf). It must be the forward potion! Only #4 remains, so it is the final bottle of poison.

So, there's a detail here that I'm surprised has been left out.

In the original book, the picture that's shown above doesn't appear. The picture appears to have been added for a later web-based version of the puzzle. Nothing in the text tells the reader which potions are the dwarf and the giant. Although Hermione would be able to see it, the reader isn't told.

If the dwarf and the giant are as shown above, then the solutions above work; and since these match the solution that Hermione came up with in the book, it is likely that the picture correctly represents what Hermione saw.

But what if it didn't?

Finally, we're going to include a fair Snape hypothesis. This is simply that we assume Snape designed the puzzle fairly (if it was meant to be unfair, just put poison in all 7 potions and call it a day). This implies that:

I'm not going to repeat the reasoning that's given above. After applying the rules other than the "dwarf and giant" rules and their corrolaries, we are left with one of the following three sets of possibilities (where a letter means that a bottle has a chance of containing that potion):

By the fair Snape hypothesis, the "dwarf and giant" rule must therefore complete the puzzle and tell us which of these cases we are in and then which is the correct bottle to drink.

Case 1 is easy, because it's uniquely identified by either 2 or 6 being marked safe. In this case, r is 7 and a is either 3 or 4. However, 3 and 4 also have the possibility of being P. By the fair Snape hypothesis we must be able to tell that a is not P so the correct bottle must be identified by the dwarf and giant rule; ie, it must be the other safe one.

Case 3 and 2 are harder. We can simplify case 3 somewhat: In this case, a is 4 or 5, and r is 1, 4, or 5. By our Fair Snape Hypothesis there must be no risk of drinking the potion that sends us in the wrong direction, and the only way this could be avoided is if r is 1, so our simplified case 3 is shown below with case 2:

Unfortunately, there are no potions that are always poison in one case but not the other, so simply identifying some potions as safe cannot tell us which case we are in. We thus need to work from the disjunction:

So by fair Snape, a must be whichever of 3-5 is marked safe, because otherwise it would be impossible to tell it from poison.

So we end up with a strange total solution:

Snape might be a bit disappointed to learn that the consequence of this is that not a whole lot of logic is needed: simply chugging the dwarf and the giant - which are both certain to be safe - will automatically get you through the puzzle.

But here's where things get really interesting. It's actually possible to go further than this and, given our Fair Snape Hypothesis, solve the puzzle even if all the bottles were the same size!

How do we do that?

In our three cases above, there is exactly one case where we can potentially identify a without any reference to size. That is case 2. So if all bottles are the same size, a fair Snape can only set case 2, and the solution is that r is 1 and to find a, drink potion number 5; if it wasn't a it was wine, so you'll be fine, and then 3 is a.

Since there are only 2 wines in total, and we have identified all of them, that means #1 and #7 can only be Poison. And from Clue 1, a Poison must sit on the left side of every Wine, so #5 (and #1) must be Poison. That leaves the last potion, #4, which must be the second Target potion. So we have [P W T T P W P].

CLUE: Fourth, the second left and the second on the right Are twins once you taste them, though different at first sight CLUE: Two among our number hold only nettle wine,

Therefore bottles 2 & 6 must be nettle wine as they are twins and there are two wine.

CLUE: First, however slyly the poison tries to hide You will always find some on nettle wine’s left side;

Therefore bottles 1 & 5 have to be poison as there are left of the wine, 3 poisons in total

CLUE: Second, different are those who stand at either end, since one is poison 7 cannot also be poison But if you would move onwards, neither is your friend, then number 7 cannot be the potion that takes you forward meaning it must be the one that takes you backwards

CLUE: Neither dwarf nor giant holds death in their insides since there is one poison left as we've already figured out the other two and and bottle number 3 is the smallest bottle is cannot be the poison which only leaves room open for number 4 to be the poison

Finally that makes number 3 the potion to take one forward

8
The Security To The party [Part 23]
11
The Mysterious Disappearance of Doctor F. Andrews [Part 1]
57
Who shall come to the tea party?
9
Athletes at the Rio Olympics
4
The Monty Hall Arena
3
Floor arrangement based puzzle with two variables
3
SafeCracker #1 - Look who's talking
3
Asymmetric Logic-grid "Brentwood Puzzle": What are these people doing?
13
What's the name of the kind of puzzle where in-story solvers have more information than us, and how far they get is a clue?