Edward had enough! This was it! During the yearly sorcerer meet in a hidden cellar in Léon, Edward discovered a red stain on his precious robe. First he thought that it was just blood - but no, it was red wine! If another sorcerer would've noticed the stain he'ld have been the laughing stock of the whole meet! He didn't even drink wine!

No, it was Bob's fault. What did he think? Just because he's a measly house-servant he's allowed to do any mistakes?! He had to pay - but Edward only had a few hours before his own Master would return.

After tricking the mute Bob down into the cellar, Edward trapped Bob's mind with a maze spell. This spell would throw Bob into a featureless labyrinth and force him to attempt and escape. And the best part? While inside the maze, every minute in the real world would feel like an eternity!

But as Edward was just about to start his evil laugh, Bob woke up. He escaped the maze! Edward went back into his room upstairs to draw a new one.

It was perfect. A piece of beauty. This time, Bob would pay for not properly dedusting the wall behind his bookshelf! After trapping Bob in another maze, he confidently left the cellar - just to come back 10 minutes later with Bob already gone! Impossible! And he only had enough astral power left for one more maze spell! 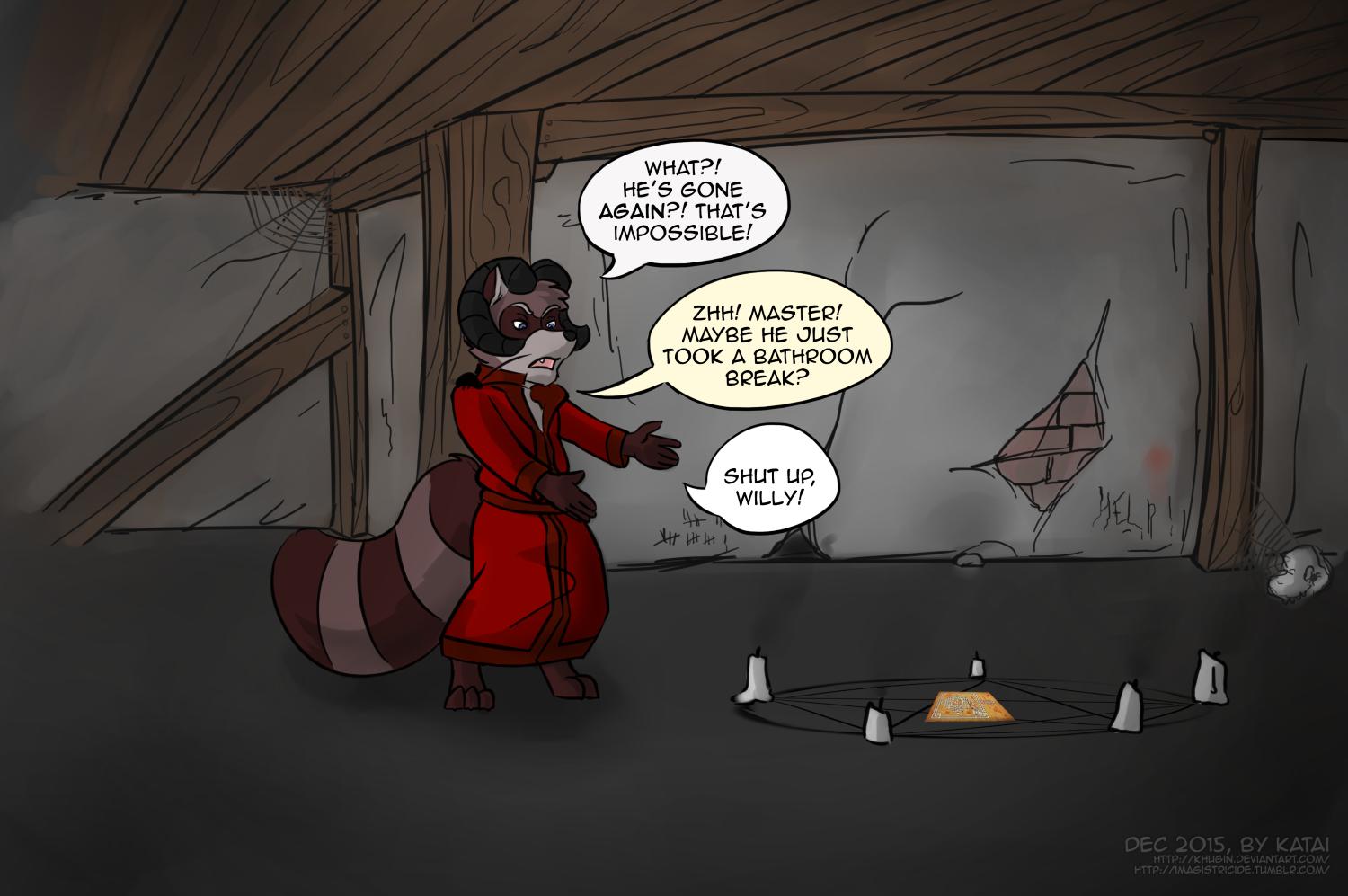 Edward had to figure out what strategy Bob used to escape his mazes, to create one that was inescapable.

When mazed, a person has to decide for one simple rule/strategy on how to deal with every crossing paths. The rule shouldn't be more complex than one if/else statement and be easy to memorize! Only actual crossings are relevant, corners and underbridges are unimportant.

Due to the confusing nature of the maze, the victim also can only count on two informations only:

The victim has no sense of orientation, does not know how long the tunnels are or how many corners they had and cannot leave behind any marks. Everyting is featureless and looks exactly the same!

There is no "going straight ahead". It's always "left" or "right"!

How to handle "X-crossings". Always go either "left" or "right", never "straight ahead"! 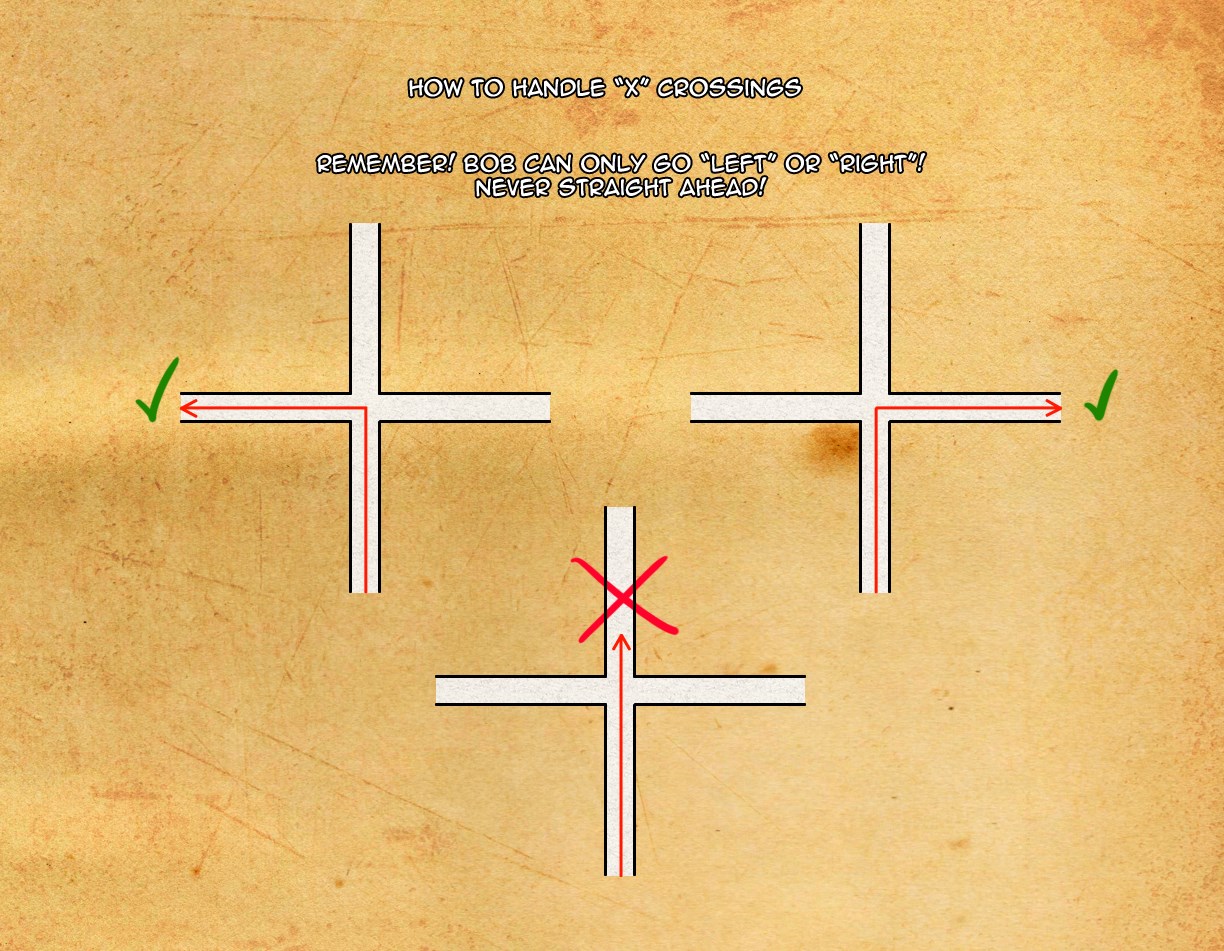 Luckily, Edward is able to analyze Bob's path through another spell. The red line marks the way Bob took but doesn't display how many times he passed through the same tunnel, so the information is of limited use. 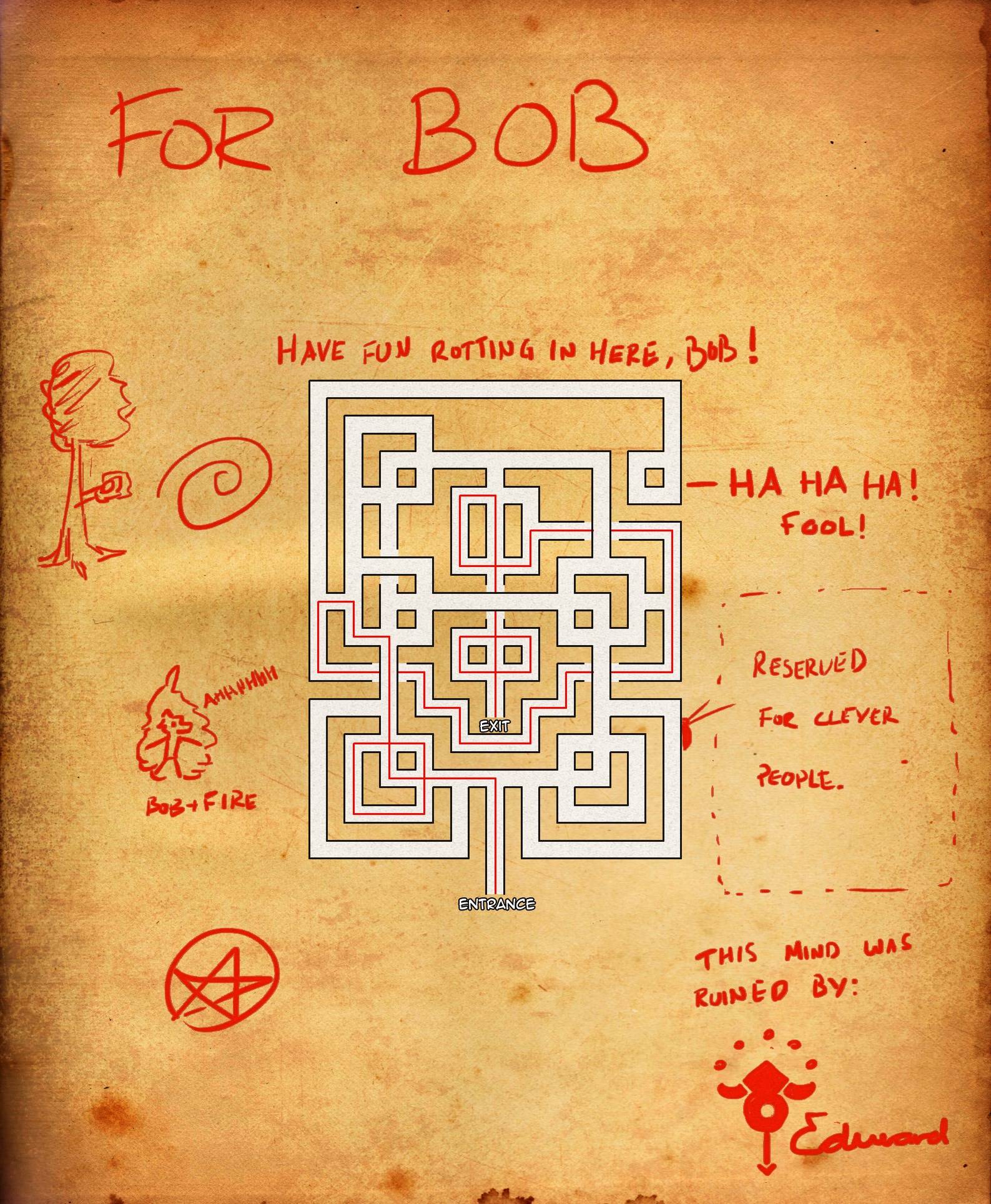 While analyzing the second labyrinth, Edward was able to analyze how many times Bob went through a certain crossing (depicted by the number). 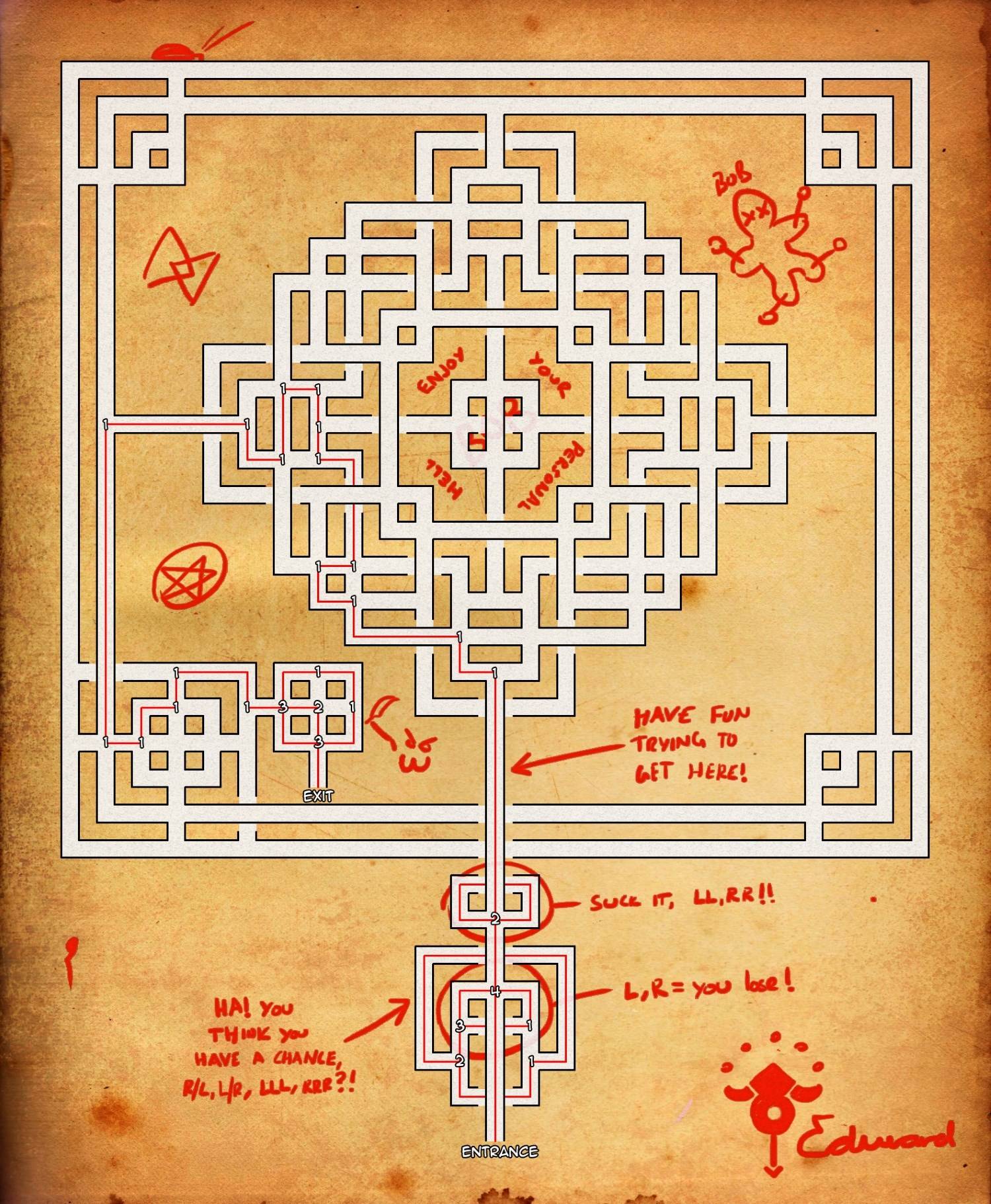 1. What simple rule/strategy is Bob using to get through Edwards labyrinths? Bob uses the same strategy for every maze! It does not change between mazes!

2. Is it possible for Edward to create a 2 dimensional, finite labyrinth to stop Bob from escaping a third time?

(I hope I could make everything clear - I'm sadly not a native english speaker and yet have to practice explaining riddle-rules. Let me know if something is confusing and I'll try to clear it up!)

Guess it must be very troublesome to fit all those mazes and turns using the simple rule. Good job!

1. What simple rule/strategy is Bob using to get through Edwards labyrinths?

From the question, I believe the simple rule is:

If [(number of crossings passed + 1) is prime] turn right; otherwise turn left
which results in:
LRRLRLRLLLRLRLLLRLRLLLRLLLLLRLRLLLLLRLLL

Let's see how that works in each maze.

The moves Bob took in Maze 1:

bjust enter upper-middle structure, Bob just turned left at the T-junction going inside the structure from the right, going into the loop

cwent into the loop two times

LRRLRLRaLLLRbLRcLLLRLRLLLRLdLLLLRLe, then three options, either to loop the lower left 0, 1, or 2 times before going the outer loop:
1) LLLRLLLLLR (directly go to outer loop)
2) RLLRLLRLLR (loop lower-left once)
3) RLLLLLRLLL (loop lower-left twice)
But to adhere to the "simple rule", only the third one is valid.

aBob just loop through the outer loop clockwise, then bounce back from entrance, now facing the X-junction from below

By maze 1, we need to start with LR. If the next one is L on maze 2, the next would need to be RL, resulting in LRLRL. Then we need to complete the middle loop in clockwise manner (counter-clockwise will need to repeat the 1 junction on the right), resulting in LRLRLLLRL, which doesn't work in Maze 1. So the first three moves are LRR.

2. Is it possible for Edward to create a 2 dimensional, finite labyrinth to stop Bob from escaping a third time? 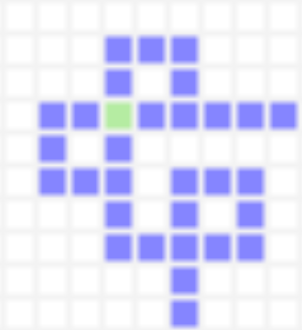 The entrance is below, the exit is on the right.

After some careful thought, Edward finally realized Bob's strategy, and after a few hours (just before his Master came back!), he found out a pattern in Bob's strategy:

Starting from the third turn (the first two are LR), Bob either takes RL or LL (since the even-numbered moves will always be L).

So Edward devices a maze where taking RL or LL will always bring you back to the same point, that is, the center of the maze (the green tile)
Edward did the evil laugh, until he realized that to enter this trap, Bob needs to take a right turn on one even move, so that Bob will be on his odd-numbered turn when he reach the green tile.

Edward was utterly disappointed ("But primes are odd!" Edward yelled in frustration) and was about to give up when, fortunately, Willy reminded him that on the second move, Bob does a right turn ("Sometimes you can be useful, Willy," Edward said).

With that final revelation, Edward finally established the Ultimate Bob-trapping MazeTM, to the horror of Bob, who we never hear from ever again (anyway, he is mute)...

I believe (before OP last edit) the "if ... else ..." rule also allows Bob to create a very long list of predefined moves like:

Also, the current "simple rule" is actually very hard to determine once Bob has passed many many crossings...

Zerris found the smallest of such maze, and the simplicity is beautiful: 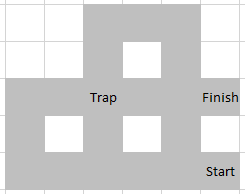 Not the answer you're looking for? Browse other questions tagged logical-deduction pattern story mazes or ask your own question.

21
Not so random walk

21
Edward and the seven imps' Game
21
Detectives vs Nelson: The Chessboard Serial Killer
35
A blue, white and red maze
11
My grandfather left me something odd in his will
3
Horror Episode #4: Feeling Drained
6
You've heard this all before
2
Guess the numbers
16
The Beehive Clock Maze Puzzle
16
A maze, a statue, and a riddle
15
The Maze of Hermes