It comes with the following riddle, which is part of the intended form of solving the puzzle.

I'm pretty sure it's a transposition cypher, based on letter frequencies, but beyond that, I have no idea.

I know that the end result plaintext is a spell in 5th edition D&D, which means it's (probably) in the format:

The [spell school] is Transmutation, and I know that the spell level is a high one, so the [Ordinal] is probably "Sixth" or higher ("Ninth" being the highest possible). This was learnt from in character knowledge. There's also a well above zero chance that the first word of the [Title] is "Elminster's" or "Elminster".

Does anyone know any good analytical techniques for solving this sort of transposition cypher, some possible cyphers it could be, or perhaps , way of solving it through the "intended" method using the riddle?

Someone asked a question as an answer, and then deleted it (obviously, using an answer to ask a clarifying question is not the way to go about things). The question was something along the lines of 'is it a spell from the D&D 5e PHB?'

The answer was no, probably not. It's a spell for 5e, but this is the third of three puzzles, and the first two were homebrew spells, so I suspect the third will be too. The previous two's names both started with "Elminster's", which is why I suspected this one might as well.

I used some in-character knowledge to get a clue. Apparently "fire" refers to heating the scroll, and "air" refers to the blank spaces in the text. When the physical scroll was heated* the following map appeared. The blue dots weren't actually there, I've just added them to make clear where the blank spaces are. For reference, the map is of the Moonshae Isles, in Faerûn (part of the Forgotten Realms D&D campaign setting).

* unfortunately, the invisible ink had faded by the time I tried this, so it didn't work. The above image is of a separate copy of the scroll, with the text superimposed over it digitally.

I haven't fully worked it out, but the spell appears to be:

And the solution's technique appears to be related to:

Sliding rows and columns "South" and "East" (wrapping around letters that go off the end).

For example, the following image shows a partially corrected (by trial and error) solution: 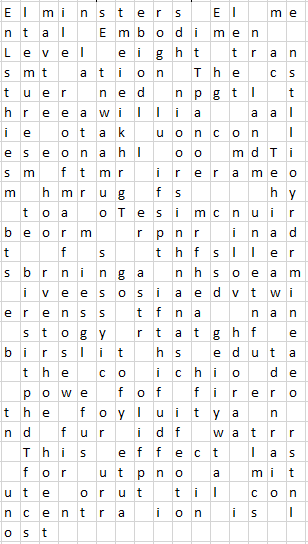 I don't have more time to work on this, so I'll just dump some final notes here, for others to pick up from:

1. The errors in my transcription clearly seem to correspond in some way to the positions of the islands. I.e. it gets more "corrupted" towards the centre where there are more islands.
2. However, there's still other issues, such as the missing "e" in "Elemental", and "t" in "Embodiment".
2. You clearly need to shift some rows East before (and/or after/during) shifting columns South. For example if you shift the 4th row East by 1 space first, then shift the columns as shown above, you can also read most of lines 4-7: "The caster and up to three willing allies...".
3. It's possible that some of the shifting requires shifting only partial rows/columns...
4. The amount you shift columns South by, initially seems to correlate with the number of blank spaces that appear on island squares in that given column, but it falls apart further along...

81
What characteristics of a ciphertext can be indicators of a particular cipher?

12
Please help with this geocaching puzzle
9
Complete the (alpha) sequence riddle
70
Unsolved Mysteries: Kryptos
83
The Puzzling Times
12
I, for one, welcome our new
7
How can I figure out what this insane coded message says?
12
The Grand Grid II
13
The Vanished Violinist