You are the author for the magazine Extreme Cuisine Quarterly. Your articles are not concerned with cooking, but rather with the presentation of the meal.

Recently, there have been rumors of a Russian chef who performs the following amazing feat. They say that during the appetizer course he brings out a huge cube of cheese and, in front of everyones eyes, cuts it up into several smaller cubes, all of which have different sizes.

Your editor wants you to fly Russia to write an article about this Russian chef.

Save your magazine the cost of a plane ticket by proving the feat is impossible.

If it could, then every planar cross-section of the cube would consist of a big square divided into several smaller squares all of which would have different sizes. This can be done (see picture below), but the smallest square in any solution is always internal to the big square (i.e. not on an edge or corner). Consider the planar cross sections that cut through the smallest cube in the entire block. The smallest-cube will be the smallest-square in these cross sections and will be internal to the large square (and also internal to the block). At least one of the surfaces of this smallest cube will be surrounded by 'walls' consisting the touching faces of the surrounding cubes. The only way to 'cover' this walled in face is to use still smaller cubes, so the cube cannot be the smallest. Hence disproof by contradiction.

I hope this is clear enough - it is hard to describe properly without complicated drawings or models. 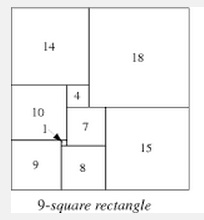 Making a cut on a cubiod will create two pieces that have have at least one side with similar dimensions. As such, one piece will have to have that side cut through, and since it too is a cubiod, the same problem will be created again.

I assume the huge cube $C$ is cut up into several finite smaller cubes $C_i$. Moreover, I assume that any finite partition of a cube into cubes must be stacked (that is, no $C_i$ is tilted relative to $C$). I provide no proof of this but I think this is pretty straightforward (examine a corner of $C$ and verify that it propagates to the rest).

We will show that such a partition of the cube contains an 'decreasing' sequence of cubes, contradicting its finiteness. The proof follows primarily a two-dimensional reasoning, which I think is pretty neat and makes it easier to follow even without pictures.

In this case, assume without loss of generality that $AB \subset PQ$ (so that $PQ$ is a barrier to squares surrounding $s_0$ in the partition of $f_0$) and that no other side of $s_0$ is contained in $\partial f_0$.

Now $DA$ is walled near $D$ by this last square and near $A$ by $PQ$, so a square that touches $DA$ cannot be larger than $s_0$, contradicting its (strict) minimality.

Now $CD$ is walled near $C$ by this last square and near $D$ by $SP$, and once again we derive a contradiction with $s_0$'s minimality.

The claim is thus proved.

These cubes determine a partition of the square $f_1$ into finite squares each of which is a different size; we may thus consider the smallest square $s_1$ of such a partition and the cube $c_1$ that $s_1$ is a face of.