Original Q: Plot 24 points so that there is only one 23-sided polygon where 23 of those points are its vertices, and the other point is not on any edge of the polygon. A polygon, here, is defined as a simple closed curve that is made up of line segments. Therefore, any set of collinear points will always form only a single side (in a convex polygon). "Simple closed curve" means "closed curve that does not intersect itself".

We say that a finite set $P$ of points in the Euclidean plane contains a 23-gon $Q$, if the following conditions are satisfied

(Note that the interior of any side of $Q$ may contain an arbitrary number of points from $P$; there is no restriction on such points.) 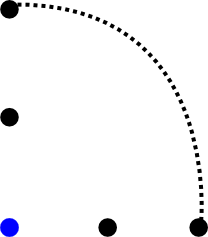 Let $P$ be a polygon made with some of these points, let $s$ be a side of this polygon, and let $\ell$ be the line containing $s$. Notice that there are no points in the interior of the shape formed by all 24 points. Thus, all the points of $P$ must lie either on $\ell$ or on one side of $\ell$ -- otherwise there would be a side that crosses $s$.

Hence we must exclude the blue point. From there, the natural polygon is the only one, since any other option would again have a side $s$ with points of $P$ on both sides.

Edit: This is wrong. As Gamow points out, you can "Skip the southern-most black point. Start from northern-most black, go to next black, to central red, to blue, to black, and then follow the parabola of red points."

I think I have it! Pardon the terrible art: 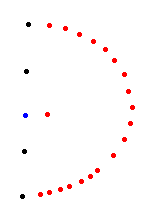 Assume the black and blue points are exactly in a line. We cannot use the blue point. If we did, we'd still need to use at least three of the black points, which generates two adjacent sides (black-black-blue) forming a 180-degree angle no matter what.

Now all that we have to show is that there is only one 23-gon possible with the remaining points (that is, the one that's shaped like a horseshoe with the concavity on the left.) We run into a similar problem with the central red point as with the blue point: if we try to use it in some other way by removing the concavity, we'll end up with three black points forming two adjacent sides with a 180-degree angle.

I'm not a mathematician, so please tell me about any flaws you spot in my logic or any ways to make this clearer.

@TylerSeacrest is right as well. Here is my solution which I thought of, even before posting the Q.