Right now I am trying to get the following distorted position:

On each face only one diagonal is solved and the rest of the cubes are a different colour than the diagonal. For example: If I am looking at the white face, there should exactly be two opposite corner pieces in that face correctly oriented, and no other white piece should be there.

If this is possible, what is an algorithm to get there?

This isn't possible to do.

Break the various cubes where all faces have diagonals into two cases:

In each of these cases, I will show why this can't be done.

In the first case, where no three diagonals meet, suppose we have two diagonals on adjacent faces. They must meet at a corner, which means (by assumption) the third diagonal does not connect at this adjacent corner.

Suppose (because colors are invariant), that the diagonals point to the DRF corner, and lie on the front and right faces. Because we're in the first case, we know that the top must go from the URF corner to the BLF corner, and the bottom must be rotated. 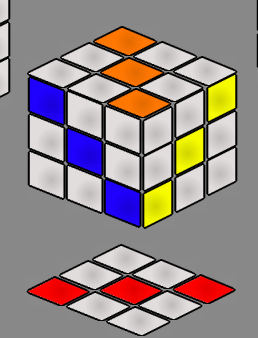 The only corner that can satisfy this orientation of the blue and yellow corner is the blue-yellow-red corner, which obviously won't work here because the diagonal is red. (The blue-yellow-orange corner is discounted because it would have the wrong positions of blue and yellow.) Thus, in the first case, there is no configuration.

In the second case, suppose without loss of generality that the joining corner is in the front top position, like so: 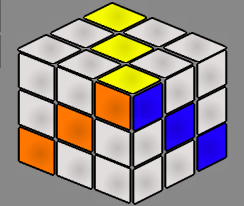 This is a little more annoying, but we can once again have to split this position into two subcases, since we need to assume one more diagonal to conclude anything about the remaining corners. 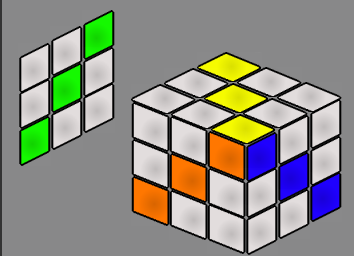 There's only one corner fitting a couple of these positions, so let's slot them in: 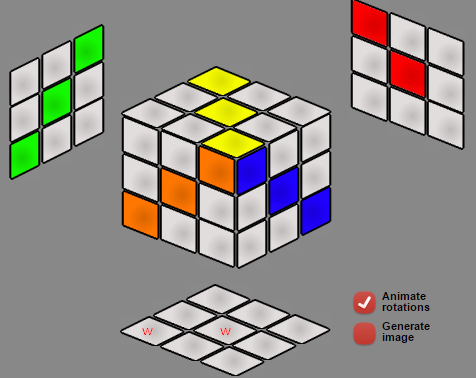 Now we know the rest of the corners, so let's slot those in. (I apparently missed a green corner color here; this is an accident.) 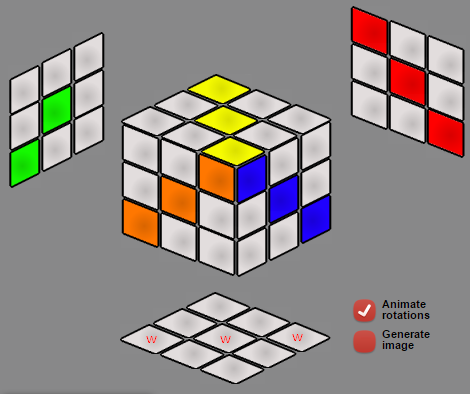 Now, we just slot in the rest of the pieces such that they themselves are a rotation of a Rubik's cube, like so: 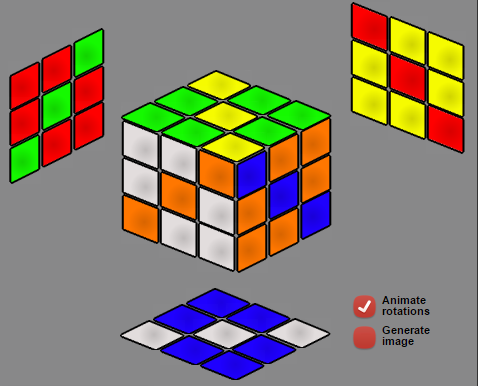 (In this specific picture, blank means white. A quirk of the editor I'm using.)

I actually thought this was a legal position when I first looked at it. Indeed, I assembled a cube in this position to try it out. Unfortunately, when I went to solve it, one final corner was rotated, making the state unsolvable.

Since this position is isomorphic to all other positions in of the same type, this case can be ruled out as a viable option.

Now, we need to take a look at the other rotation of the green side. 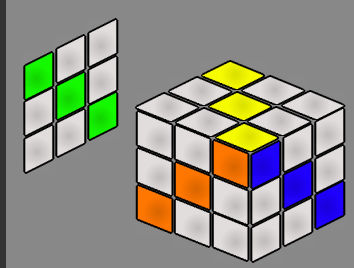 Pick an arbitrary edge. By the above assumptions, all other edges are solved with respect to the one you pick. The colors you put on this edge are therefore irrelevant.

I fixed one arbitrary edge, and fixed the remaining twelve edges with respect to it: 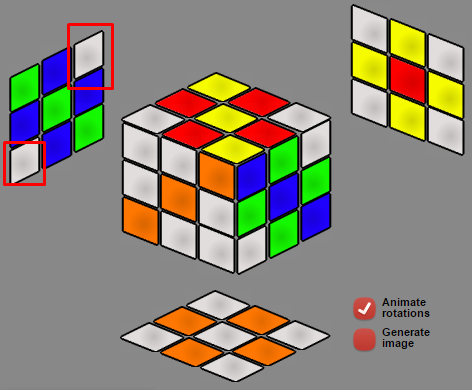 (In this picture, the four blank edges are white. Again, a quirk of the editor.)

I've marked two corners. By assumption, the green diagonal points a specific direction. Thus, the other two corners are not on the diagonal, and those squares must be blue.

Therefore, the top back corner in this frame must be a blue-yellow corner, with blue on the green face and yellow on the yellow face. However, this corner isn't available! It's the one being used in the top front of the cube. The only remaining corner that has the right colors to fit is the blue-yellow-red corner, and it has the wrong orientation.

Thus, there is no solution to subcase B.

Since there are no cases where this is possible, the state you're looking for can't be found.

This is no problem. Here's a photo of the cube solved in this way: 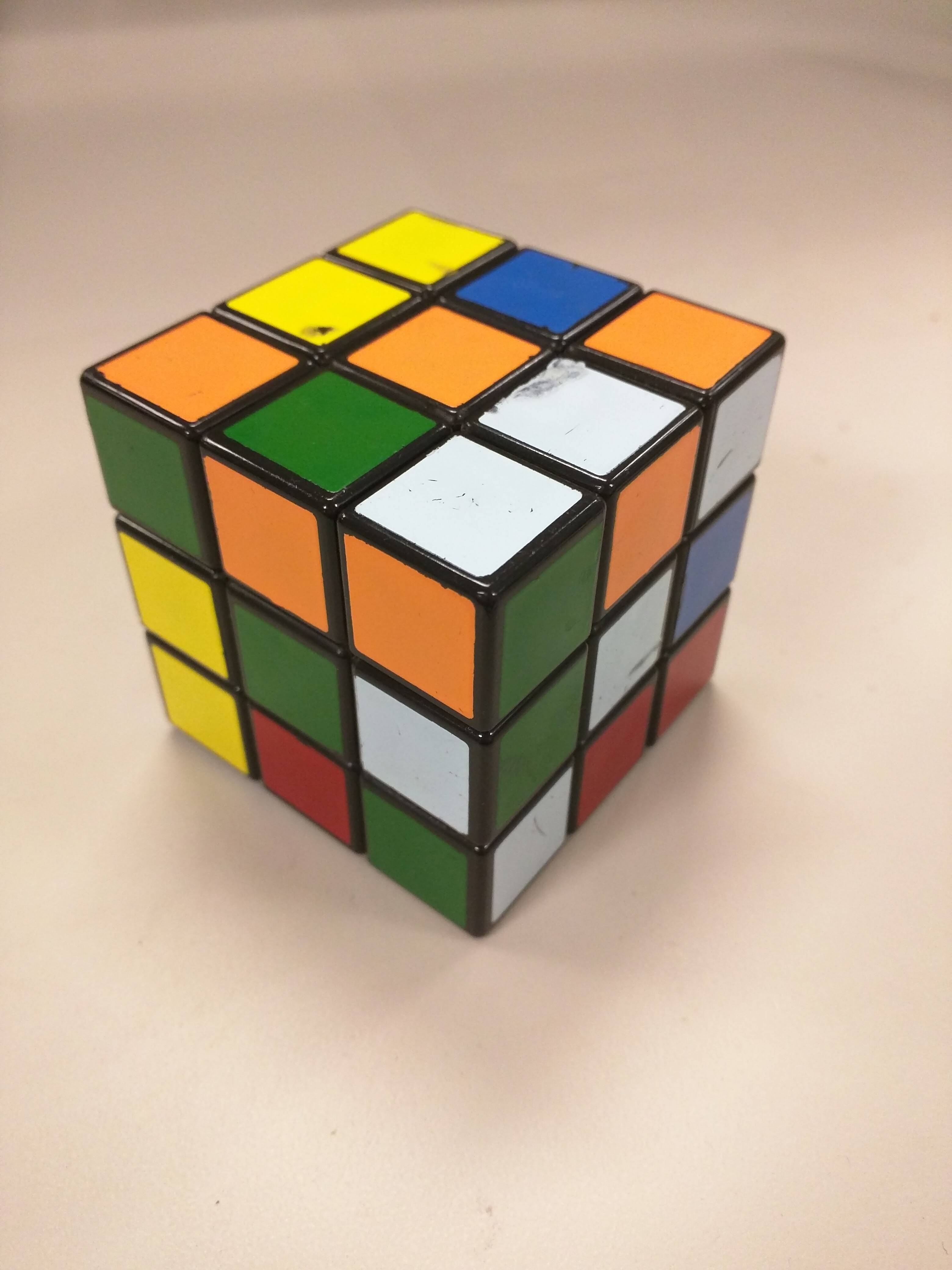 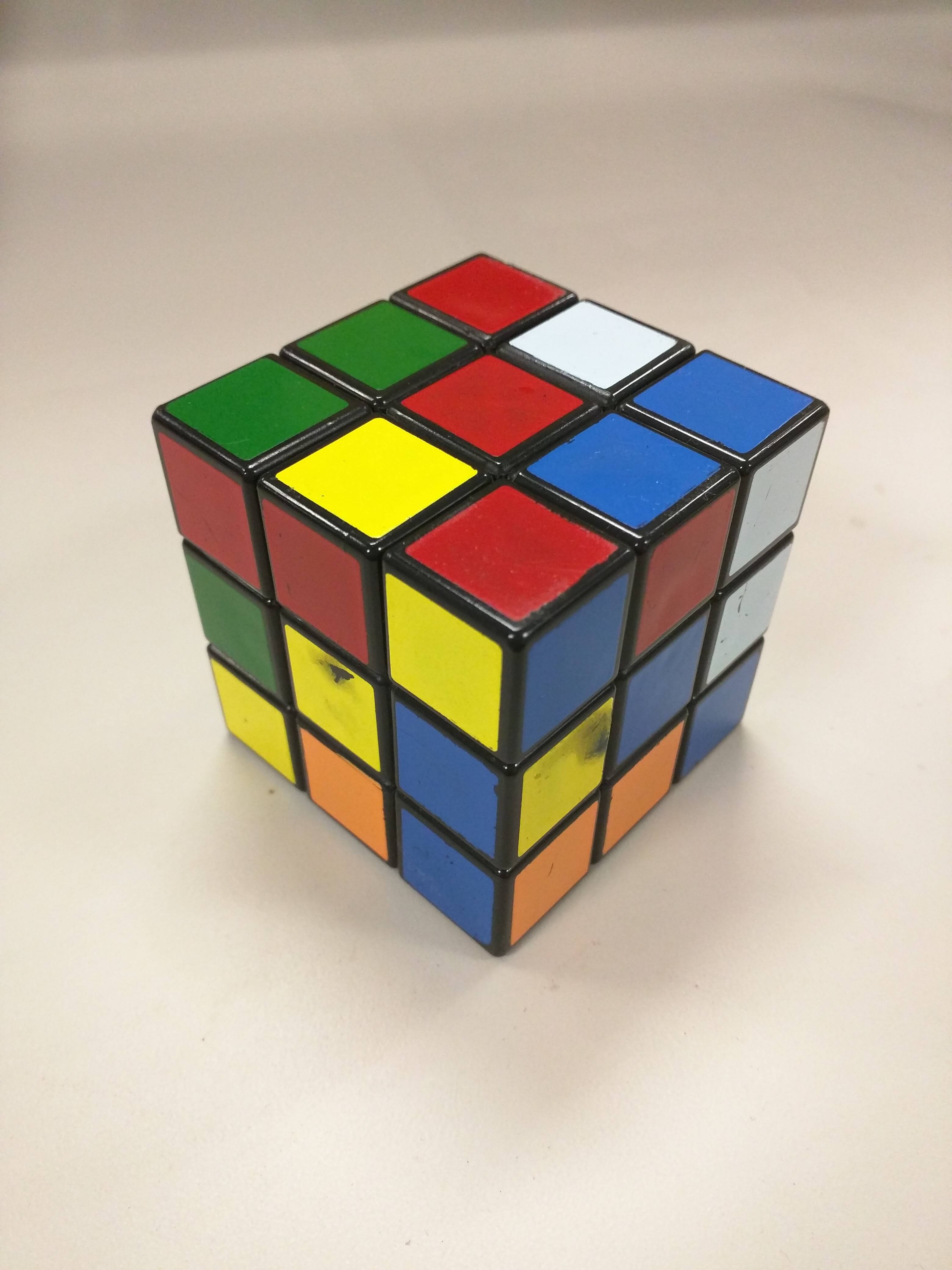 You want all the edges to be wrong, but edges can be twisted in place, provided you do so in pairs. There are 6 pairs of edges, so do that move and all your edges will be "wrong".

That will leave all 6 faces with correct diagonals and no other correct square (as seen in the photos).

Not the answer you're looking for? Browse other questions tagged rubiks-cube algorithm or ask your own question.

10
5x5x5 Rubik's Cube Smiley
7
Can a Rubik's cube be put in a position not solvable by Fridrich's algorithm?
1
How to swap two opposite corner pieces of a solved face?
2
how to shift all 4 corner pieces of the white face by one position
2
What are the official rules for generating Rubik's Cube scrambles?
2
Blindfold Rubik's Cube
6
Rubik's Scramble Search
2
How to get the final corners of a 4x4x4 in the correct position
2
Looking for an old Rubiks cube algorithm