I am amazed at my adviser's brilliance once again. Blackbeard's vanguard fleet was quickly sunk. And as luck would have it, the moment we finished cleaning up the mess, the scout returned with the lost scout from the first engagement. He seemed extremely excited and kept pointing to a piece of paper. Upon closer look, it is another map the scout drew.

After he finally calmed down, he told me the following

I have spotted Blackbeard himself on his Queen Anne's Revenge. However, in addition to his standard setup (1 flagship, 2 frigates, 3 corvettes, and 4 patrol boats), there is a man-of-war with 74 cannons. The size of man-of-war is bigger than even Blackbeard's flagship. Their formation is slightly different though, and they are closer together, but interestingly, none of the ships touch each other, not even diagonally. Unfortunately, since it was still dark, I wasn't able to pinpoint their exactly location, but I have drawn the map with the number of ship pieces on each column and row.

My adviser pondered at the map for a while, and then smiled.

Men, it seems like Blackbeard himself isn't aware of our presence yet, we must strike them now before dawn or we will face Blackbeard's full wrath. I have figured out their exact formation, so follow my orders and I will lead you into victory!

With a cheer from the rest of the sailors, everyone frantically prepare to sail again, leaving me behind pondering just how he managed to find out the enemy fleet formation, and why the scout keeps adding a legend but not using it.

That leaves the Man-of-War in Row 3. 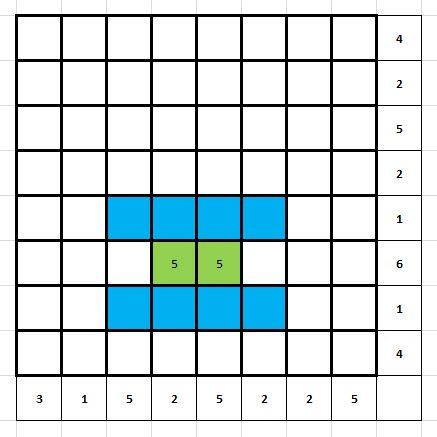 We know that in column three and five there has to be a vertical segment of at least length two, so we can mark off a couple sea segments. 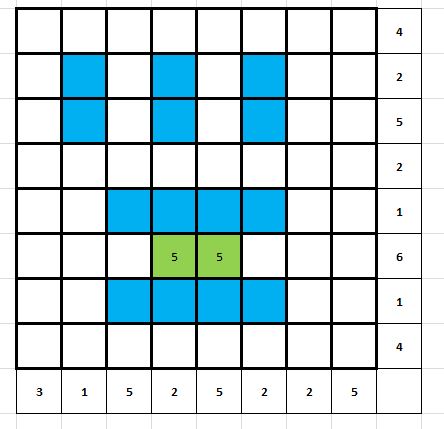 Fill in a couple segments: 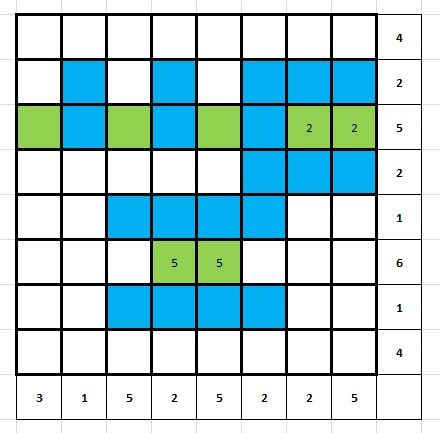 Now column 8 needs to have a vertical segment of length at least two, so we can mark off a couple sea segments. 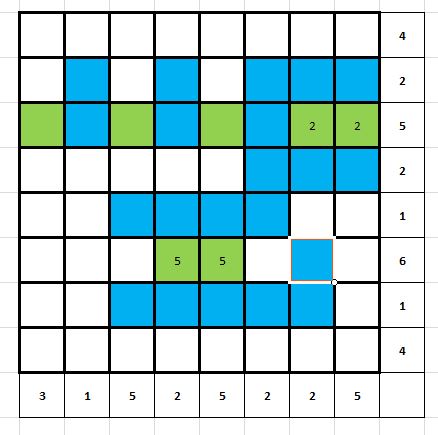 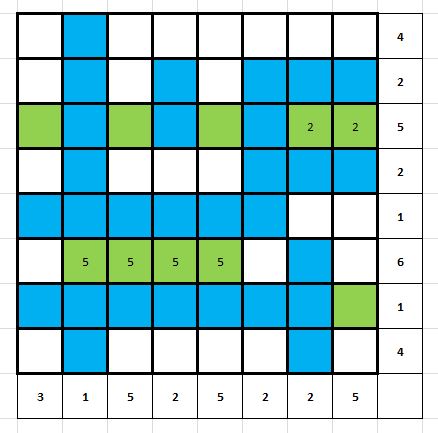 The two blanks adjacent to the Man-of-War will be a ship piece and a sea piece, leaving column eight, row three as a ship piece. Filling in knowns takes us here: 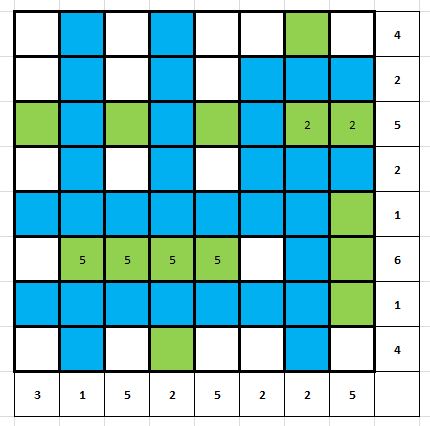 If column six, row eight is a ship then forced moves leave us with too many ships of size two or larger. 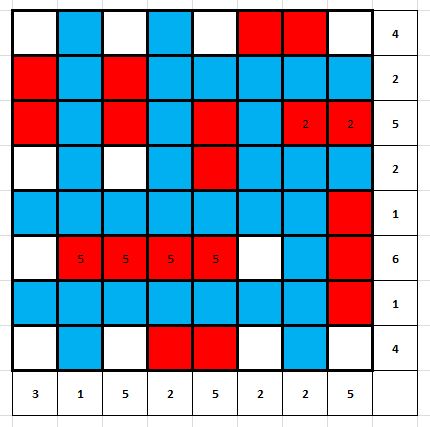 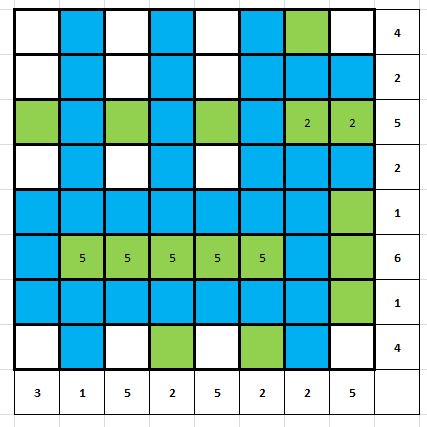 Row one cannot contain the Queen Anne's Revenge. If it did then column 8 would hold the frigate and columns one, three, and five would have to contain a frigate, two corvettes and two patrol boats. This will make the two in row 7 impossible. 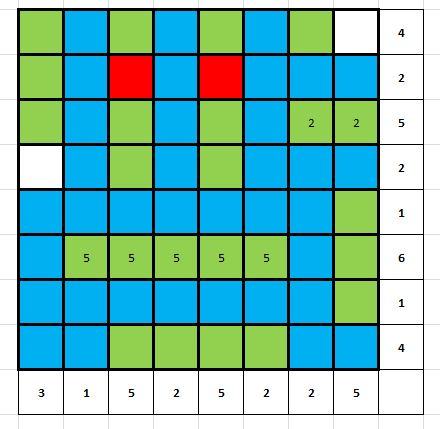 Column eight cannot contain the Queen Anne's revenge. If it did then two of columns one, three, and five would contain frigates. Therefore column five, row one would be a sea segment forcing column five to contain a ship of length four, which is not possible. 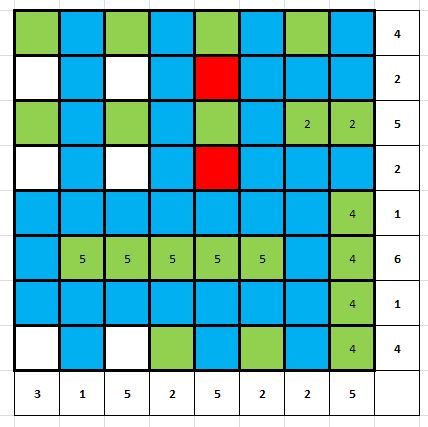 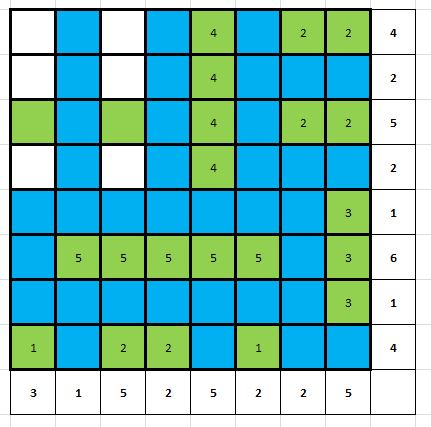 Of the two spaces left, one must contain a frigate, and the other two patrol boats. Column three needs the frigate. This solves the puzzle. 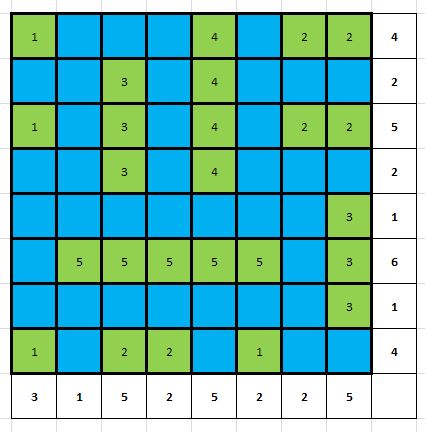 As an aside, there are some steps that I would not have been able to do easily on paper. The hunt and check to mark off row six as impossible for the Man-of-War was a little deep. Curious to see if anyone else has any tricks.

I used a computer program to solve it. I actually didn't write it myself. I knew that these kind of puzzles are sometimes called bimaru so I googled for "bimaru solver". I ended up going to https://github.com/galedric/Puzzle-Solvers/blob/master/bimaru.lua . I happened to have lua installed so I used that program and I solved the puzzle by entering:

Not the answer you're looking for? Browse other questions tagged logical-deduction story or ask your own question.