The Witches Have Overdone It

Alice the Witch had a great night last night. She'd had a Halloween night house party with five of her closest friends from Witch College that she hadn't seen for ages. They had been drinking and gossiping and laughing until the sun had almost come up. Even their familiars had behaved well too (except for Gertie's which had a minor argument with the snake and the toad).

Each guest had brought some of her favourite party food with them (the Spider Soup in particular had been fantastic).

However, this morning she discovered that each of her friends had left something important behind. Even her own head was a bit fuzzy and she could only remember a few details of who had brought what, the order in which they had arrived, or which familiar each of them had brought.

Question: Can you help Alice remember which witch had brought each of the dishes and help her reunite her friends with their possessions?

With all clues I got to this state: 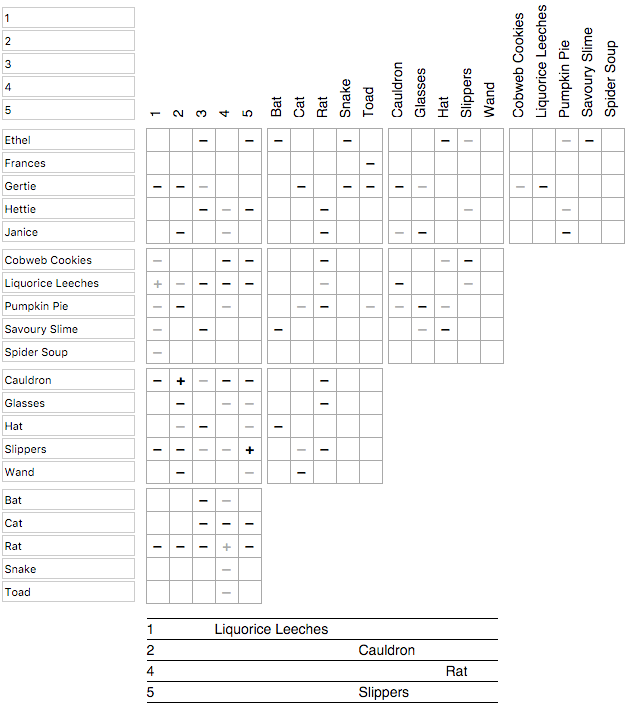 At this point I had to start guessing. First I decided between Cat on number 1 or 2. Number 2 lead to a solution that contradicted one of the hints so Cat was number 1.

This lead me to a state were I could choose between Bat on number 2 or 5. Number 2 lead to a sollution that contradicted one of the hints so Bat was number 5. And this also directly lead to an solution so that was the answer

btw, I used the tool on http://www.jsingler.de/apps/logikloeser/ to help with the grid

Not the answer you're looking for? Browse other questions tagged logical-deduction seasonal or ask your own question.

9
Recover the Ripped Quote
8
The Security To The party [Part 23]
7
Dr. and Mrs. Smith shake some hands
6
Knights and Knaves in the Wild West
57
Who shall come to the tea party?
4
The Witch Invites
4
The kids moved when we were gone! What is the likelihood that white is winning?
2
Baggage Mishap Logic Grid
7
Who owned each heirloom?
13
Murder Mystery - Murder at The StackO Ave Tavern