This one should be popular: Part two!

Who are these eight people, and what does each line mean?

Some familiarity with the Beatles' associates, collaborators, and entourage is necessary to solve this one.

These are pretty big hints, and probably give things away, so use them only as a last resort.

Perhaps because of their alleged rivalry, when this man was asked to perform on a Beatles song, he chose to do so on an instrument he didn't know how to play. As a result, we have the worst instrumental performance ever made on a Beatles recording. 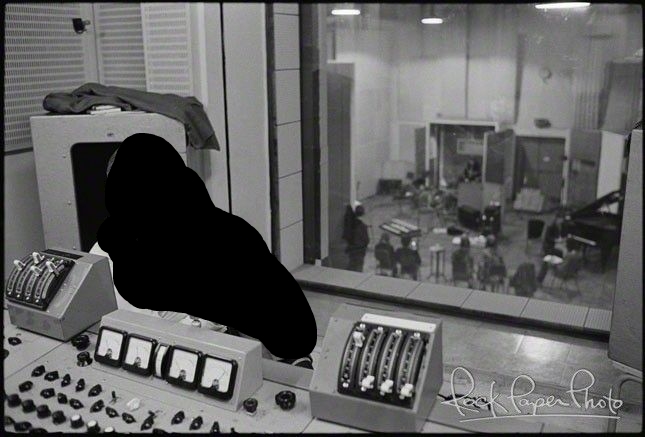 Eric Clapton. First line refers to Derek and the Dominos. The line about Majnun refers to a legend that was part of the inspiration for "Layla". The best friend's wife was Pattie Boyd, who was married to his friend George Harrison

Billy Preston. Keyboard player. His most well known song is "Will It Go Round In Circles. He met them while touring with Little Richard, and he played with them on the albums Let It Be and Abbey Road just before they broke up.

Brian Jones. The Rolling Stones were thought of as huge rivals to the Beatles. He played sax on You Know My Name (Look Up the Number).

Sir George Martin. Producer and sounde engineer (above them, in the booth) often referred to as the 'Fifth Beatle'. Contributed to their commercial success and the formation of their sound. Did arranging work, and often performed on various recordings in different capacities.

Brian Epstein. He discovered the Beatles in the Cavern Club (Cellar Full of Noise, which was also the title of his autobiography), and managed them until his tragic, early death. Also somewhat tragic due to his homosexuality at a time when such was considered criminal in England.

Stuart Sutcliffe. Original bassist, but left to pursue art before the group became famous. Astrid Kirchnerr was his fiancee before his untimely death.

Neil Aspinall. Moved in with his friend Pete Best and his mother. Got involved with the mother and fathered a child (giving Pete a brother) and later became the Beatles' road manager.

Mal Evans. Drove the band around, helped set up equipment, acted as a gofer, etc. In their second film, Help!, he appeared as a swimmer emerging from under the ice after it had been cracked open by a bomb. Was shot by police at his house when his girlfriend told police he had a gun, and they mistook his air rifle for a real weapon.

Not the answer you're looking for? Browse other questions tagged riddle knowledge wordplay or ask your own question.

3
A shopkeeper receives a strange visitor
12
This one should be popular!
15
Elle Rend Le Coeur Plus Amoureux
6
Little Pictures: Charlie's Lunch Edition
9
A Series of Fortunate Events
8
The Basalisk and the Boy of Fire
7
The Boy of Fire: The Final Battle
1
Fiction Book Who Am I? #4 (Guess the book too!)
10
Can you help find my mistake?
31
A fairy tale in a golden toy