Four friends want to share a pizza. However, the pizza became badly misshapen en route; though it is still flat, it is now shaped like some arbitrary polygon. 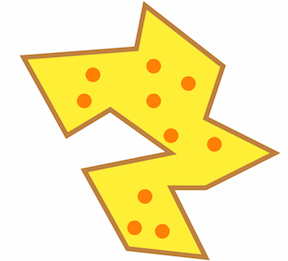 Prove that it is still possible to cut the pizza into four portions of equal area, using exactly two straight cuts which are perpendicular to each other.

Clarification: The two cuts divide the plane into four regions, and the four "portions" are defined to be the pizza parts contained in these regions. A portion might consist of several disconnected pieces.

(The cuts are allowed to go outside the pizza. The pizza is placed on a cutting board, and then a pizza cutter is rolled in a straight line twice, such that the two lines are perpendicular. The pizza may not be moved before making the second cut. The pepperoni distribution doesn't matter).

By continuity, for any cut angle, there's a unique cut that slices the pizza into two equal-area segments. Moreover, the cut placement is continuous in the angle, since for close angles, the lines are nearly parallel and their intersection point must lie within the convex hull of the pizza, a finite range.

Now, consider a cut at some angle and the perpendicular angle. These must intersect and so divide the pizza into four sections, with any two adjacent sections totaling half the pizza. So, the pairs of opposite sections have the same area. It remains to make the area for each pair equal.

Do this by continuously varying the initial angle over a range of 90 degrees. From the start to the end, the original and perpendicular cut will have switched, so the respective areas will have switched. Since the cut placement is continuous in the angle, the sizes of the sections also vary continuously, and so by the intermediate value theorem, must be equal for some angle.

Do this movement for P moving along line2 , from very far up to very far down. Again the 2 upper quadrants will be equal to the 2 lower quadrant at some point along line2.

Now repeat this process, but use theta from 0 to 90 Degrees. The locus of the points (for each theta) with this movement must be continuous.
Starting at theta=0 and going to theta=90, we see that Q1 and Q2 exchange their final values. So, starting at Q1 is-less-than Q2, we get Q1 is-more-than Q2. So, at some theta, Q1=Q2. So all 4 quadrants are equal at this point of intersection, at this angle.

Summary : We search over all intersection points, at all angles, which will give us at least one solution, because of continuity.

Here, start with the horizontal gray line and the vertical rid line on the left. Intersection is P, with 4 quadrants. We see that area is Q1+Q4=0, considering the areas of the pizza in the quadrants.
We move P slowly towards right, to get the center red line and the rightmost left line. We end up with Q2+Q3=0.
So, at some point, we have Q1+Q4=Q2+Q3, shown as the central red line.

The diagonally opposite quadrants will have equal mass.

How find the focus of the centre of the cross for all orientations of the lines. And imagine transitioning smoothly from the original cross to one at right angles to it (which will be in the same location).

The one at right angles will be heavier where the previous one was lighter and vice versa. So between these there must be one where they're all the same (since each of the transitional states has diagonally opposite quadrants equal).

7
Maximum number of pieces of equal area you can obtain by cutting a pizza a certain number of times
10
Ernie and the Geometric Ginger Cookies
30
Dissection Puzzle - The Umbrella Stand
9
Separating the Pieces of a Rubiks Cube
11
Professor Halfbrain's first cutting theorem
12
Professor Halfbrain's second cutting theorem
6
Squaring a cross one more time
13
Ernie and the Case of the Singing Sisters
11
Pentomino solution maximizing straight lines length in rectangle - wood cutter problem
10
Haselbauer-Dickheiser Test no. 3: Circle divided by lines between a blue dots