Despite strong objections by many here at StackExchange, the mad scientist continues to use ethically questionable methods to study the spatial cognition of ants.

Last time, he left ant Juliet at a corner of a cubic box and placed ant Romeo at the opposite corner. Much to the mad scientist's surprise, without hesitation Romeo followed the shortest path over the sides of the box that brought him straight to Juliet.

Now the mad scientists has worked out a much bigger challenge for Romeo. Again he leaves Juliette at a corner of a box, but this time it is a 7-dimensional hypercubic box. Out of the 127 remaining corners, he selects the one that is furthest from Juliet. With a big grin the mad scientist places Romeo at this very corner.

Romeo is confused. He knows how to handle a box with 6 sides. But now as many as 672 square sides are available on the box. How should he optimize the journey to his beloved Juliet?

Can you help Romeo? How long is the shortest path (expressed in box edge lengths) to Juliet?

[Inspired by this recent puzzle.]

Total distance traveled: $5$ units. This corresponds to the shortest path through six squares arranged in a zigzag fashion: $\sqrt{3^2+4^2}$.

Romeo picks a square face having his starting position as a vertex, and travels along its diagonal. Romeo then picks another square that has his current position as a vertex but does not share a side with the first square, and travels along its diagonal. So far Romeo has travelled $2\sqrt{2}$ side lengths. Now Romeo can find a cube with him and Juliet at opposite vertices, and he will have to travel $\sqrt{5}$ side lengths more to reach Juliet, for a total distance $2\sqrt{2}+\sqrt{5}\approx 5.06$ side lengths.

No paths can do better than an analogous to

's diagonal path, for hypercubes of any dimension. Without loss of generality, let's assume the side length equals one.

In this way, there are $n$ of them, where $n$ is the number of dimensions. In an isometric map, each edge shares one face with the previous one, and no three edges are on the same face. This is enough to show that they form a zig-zag line, and the optimal path is obtained by linking the two extremities (proven later): 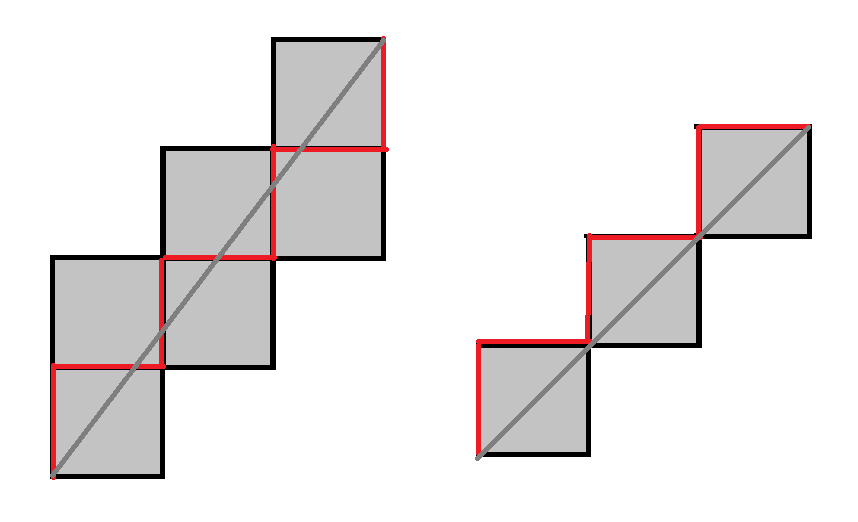 Moreover, for even $n$ we have a chart with equal number of horizontal and vertical edge intersections (or displacements), while for odd $n$ they differ by $1$.

We also see that any path, in its chart, intercepts the vertical and horizontal edges at least $n$ times, one for each coordinate changed to $1$ (same could be said about those increasing from $0$).

Now take a isometric chart and consider the dimensions, $dx$ and $dy$, of the bounding rectangle. Consider those with $dx+dy$ equal to $n$.

The squared length of a straight line from one corner to another of the rectangle ($dy^2 + dx^2$) is minimum when $dx$ is closest to $dy$, since it is equal to the square of their sum (a constant) minus twice their product (maximum when they're closest): 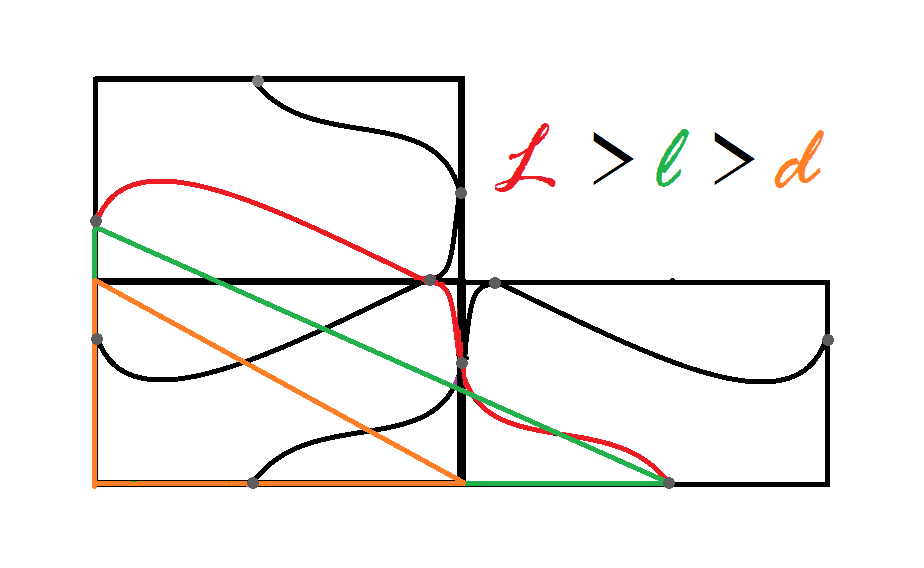 Since the line must touch the four edges, we can reflect its pieces over the intersections to show that it is greater than the diagonal*

Rectangles with $dx+dy$ greater than $n$ have also greater diagonals, since by decreasing $dx$ or $dy$ we can make a shorter path which has a sum of $n$, and, thus, is greater than or equal to our diagonal.

So our diagonal solution, presented above, is the shortest in any rectangle that has $dx+dy$ no less than $n$. Now it only remains to show that smaller rectangles don't lead to optimal paths.

Every optimal path in a rectangle with semiperimeter ($dx+dy$) smaller than $n$ has to cross at least $n$ edges, moving one unit vertically or horizontally (or both) each time.

However, if this was done monotonically, $dx+dy$ would be greater than or equal to $n$. So it eventually runs in the opposite direction. Since the path is straight inside squares, the change happens at an edge or corner.

But if all turns were in the corners, then the paths after the turning points could be reflected vertically or horizontally in the chart one at a time while preserving length, until there is a monotonic path.

This path would then lie in a rectangle of semiperimeter $n$ or more, so would need to be greater or equal in path length to our diagonal solution. If any turn is at an edge, then the path is also not optimal. So there is no such optimal path.

I believe that you can fold every two-dimensional side in such a way so you get a 6x1 rectangle and then you just take the diagonal. Just like you can get a 2x1 rectangle with a regular 3d cube.

To illustrate this take these as the vertices of our 6 by 1 rectangle (sorry. I'm not familiar with mathematical drawing tools):

Then you have these 7-dimensional coordinates for these vertices.

8
This ant sure is smart. But how fast is it?