Two friends, Amy and Ben, each use a three-disk combination lock to secure their bikes. Each disk has $10$ orientations, with integers $0$ to $9$, so there are $10^3$ possible combinations. One day, Amy and Ben compare methods for locking their bikes...

Amy: "I prefer to keep turning the disks until adding another turn would result in diminishing marginal lock-iness."

Lock-iness, $\Omega(n)$, counts the number of distinct combinations $n$ turns away from the unlocking combo.

Ben: "Wow! I do the same thing! Except that I would never only turn one disk; that'd be too easy for a thief to crack. Neglecting those cases, I also add turns until adding another would result in diminishing marginal lock-iness."

When calculating $\Omega$, Ben neglects combinations which would involve only turning one disk from the unlocking combo. He only turns two or three disks when making it lock-y.

Ben: "We are in agreement. I stop at $m$ for the same reasons, except I don't count combinations where only one $m_i$ is nonzero; I consider it unsafe and expect a wise thief to make the same assumption. I'll leave my shiny red bike out there unwatched for a while, because it is so locked."

Ben must start by turning at least two disks, since he can't turn just one disk. He makes turns until an added turn would increase his $\Omega$ by less than the previous turn (given his "no single disk" restriction).

Amy: "Yes. I will do the same with my bike, the dirty, but equally appealing blue bike next to yours."

Unfortunately for them, a would-be thief heard this discussion and began counting states on paper.

The Problem: For a known value of $n$ turns, the thief could find every possible combination, one of which will open the lock. Whose bike will the thief choose to ride away with, if ease of thievery is the only factor?

Examples: If Amy had instead said that she only turns one disk once, $n=1$, there'd be $\Omega=6$ different combinations for a thief (knowing $n$) to try.

If Ben had said he turns two different disks once each, $n=2$ and $n_i = n_j = 1$, there would be $\Omega(2)=12$ different combos for the thief to try. Knowing both of these examples, he would try to steal Amy's to get away quickest. 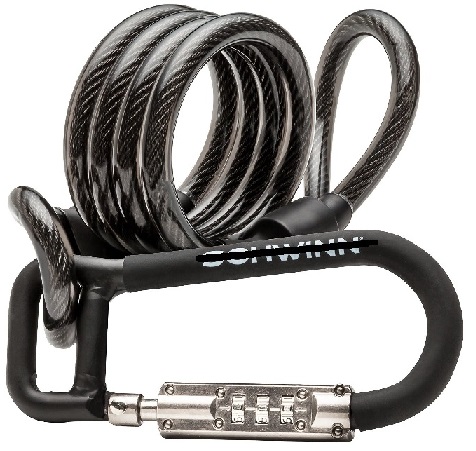 Using Mathematica I generated all possible combinations for each $n$:

We can see that:

Thus the answer is:

Ben has made a poor decision about his stopping criteria, and the thief will always choose Ben's bike!

Here's the code I used:

It's actually quite fast.

6
Unlocking a curiously-geared combination lock
16
Rotationpuzzle in hex - The journey beyond the tomb
17
Faulty Combination Lock
7
Lock Optimisation
12
Cracking a combination lock
7
Key and lock puzzle
8
8-bit Lock and Key
11
Hacking a Safe Lock after 3 tries
9
Whose birthday is it?