It is a little known fact that Santa Claus is in fact a vampire. Why else would he spend so much time near the North Pole and travel only at night? Yes, he fears daylight!

His problem is that during the summer, there is plenty of daylight on the North Pole. This is why, every equinox, he migrates to the other pole. In March he flies to the South Pole, and in September, he flies back to the North Pole.

To avoid daylight, he has to complete the trip during the night. He could leave the North Pole at 18:00 GMT (6pm), fly down along the Greenwith meridian and reach the South Pole at 6:00 GMT (6am). He would have to fly 20000 km in 12 hours at ~1666 km/h. Santa could easily fly that fast. It was proven he flies faster than the speed of light to deliver all the presents in one night. But he wants to relax and enjoy the view.

So the question is: What is the minimum speed Santa needs to fly to travel from the North Pole to the South Pole while avoiding all daylight.

It is assumed the Earth is a perfect sphere with perimeter 40000 km, the Sun is over the equator and shines over exactly 1/2 of Earth surface. The altitude of flight is negligible.

This actually has a fair amount of similarity with The lake monster. But for this puzzle I'll skip all the advanced maths and find a solution based on simple logic.

I guess the optimal path to and from these circles are approximately half circles. I'll use some differential maths to figure that part some day when I feel like my head doesn't hurt enough.

Santa can travel at approximately 761.15 kph all the way. At 18:00 GMT he leaves hugging the line of sunset (momentarily he will be travelling directly south, but as he drops to lower latitude he has to fly at an increasing angle towards the west so viewed from above the north pole his progress would vaguely resemble a spiral). Eventually, at a latitude of approximately 62.8 N, Santa will find he is travelling almost due west, and can only just keep up with the line of sunset. At that point, he starts to swing gently south (at any particular latitude L, he wants to follow a direction d = 270 - acos(0.46*cos(L)) - this points in a more southerly direction as he gets closer to the equator). Initially he will only slowly fall back from the line of sunset, but the further south he goes the more local time he loses until, as he crosses the equator (at a heading ~ 207 degrees), the local time will be midnight. He then "mirrors" his course so far in the southern hemisphere. If his heading is correct he will finally get to the south pole just on local sunrise. Any minor mistakes and Santa is toast.

Santa can only calculate his exact minimal speed by accurately solving an integral equation (if he has similar maths skills as me he will have to do this numerically), so he could reduce his speed a little below my estimate with a more accurate calculation. But the closer to the limiting speed he travels at the longer the journey will take (at 762 kph it already takes him about 20 days to make the trip), so unless he has lots of time to spare he may want to travel a little faster than the limit. Also, if he does decide to travel as close as possible to the limiting speed he will need to take into account the fact that the orientation of the sun to the north-south pole line will be changing during his trip, so he will need to solve an even more complicated integral (and leave the pole some time before the spring solstice).

The path near the pole is simple - he can just follow the sunset line (this part is reminiscent of the lake-monster problem). But the next section is a bit more complicated. Consider his passage between some latitude L and L-dL, the optimal angle to cross that latitude will be that which, for any specific speed he is travelling, loses him the least of his head-start to the murderous sunrise. Locally, this can be modeled by solving the equations below. I think that shows that the optimal path after the break-away is not a straight line but a vaguely s-shaped curve. 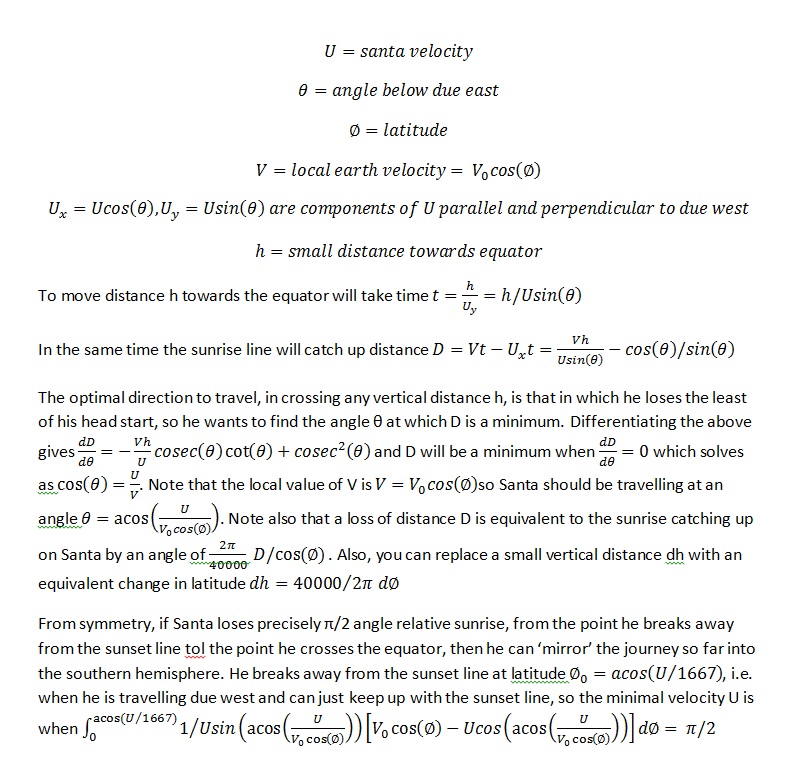 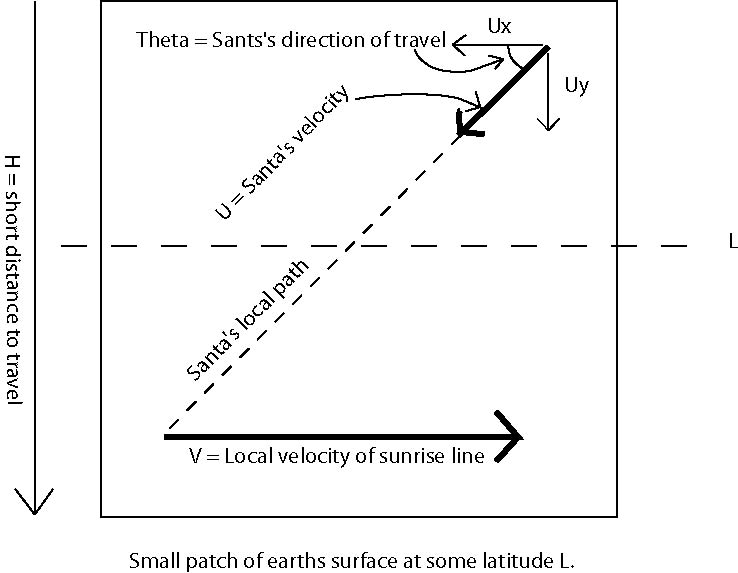 I am adding a plot showing Santa's path (I have reversed the route so he is going from the equator to the north pole, 'cos that's the way i did the maths). Note that at 762 kph, the sunrise line catches up by pi/2 = 6 hours over the route. So he can mirror the route to do the complete passage from north to south. Takes approximately 20 hours, but he can take as long as he wants circling in the vicinity of latitude ~1.09 radians=63 North 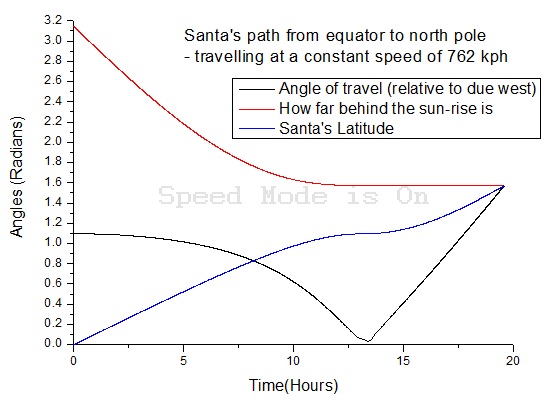 Not the answer you're looking for? Browse other questions tagged mathematics calculation-puzzle geometry optimization or ask your own question.