Worm and an Apple

Johnny has a perfectly spherical apple, with a diameter of 70 mm. While he looks away, a worm burrows through (entering and leaving) the apple, forming a single tunnel of length 69 mm and negligible width. The worm does not retrace its path at any point.

Prove that Johnny can cut the apple in half, with a single straight cut, in such a way that one of the halves is untouched by the worm.

There is a unique plane through the center of the apple such that P' and Q are mirror images across that plane. Any point on this plane is equidistant from P' and Q. If the worm was able to reach this plane and then exit at Q, it would have been able to exit at P' instead. But the distance from P to P' is 70 mm, so it could not have made it from P to P'. Therefore, the worm could not have reached any point of this plane, and it is safe to cut the apple there.

You can make the cut, as long as you prove the worm has only been in one hemisphere.

First of, the worm cannot possibly have gone through the center (that path would take 70mm, so the center is 'safe'.

The worm's path is most inconvenient if it remains in a plane, as that maximizes it's useful length available to create an 'inconvenient' path for the apple slicer.

Now, assume a plane through the apple and the 'point of entry', and assume the origin in the center of the apple, and the X-axis going through the point of entry. We need to prove that from this situation, there is no way for the worm to create a path that doesn't allow for a suitable cut. The only way the worm can block a such path, is by having an angle of 180 degrees or higher created, compared to the origin, at the side of the worm's path. 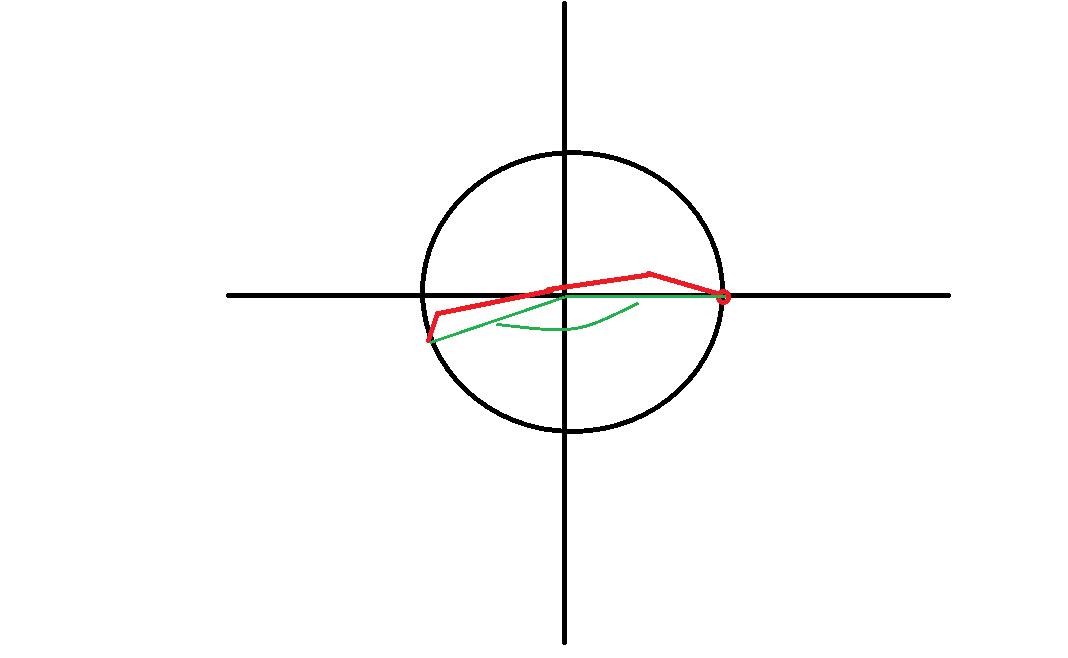 (worm's path in red, 'angle' as described shown in green)

Such a part, at it's minimal length, would be $2x$ the radius, or 70mm. We know however that the path is only 69mm. Therefore the worm cannot ensure there is no untouched hemisphere; so the cut is always possible: cut in a plane perpendicular to the displayed plane, which goes through the center of the apple and any line in the 180°+ range that is untouched by the worm.

Given wording is perhaps a bit complex, and as some have asked more detail on why I focussed on paths in a plane, I'll hereby use the wording of Ivan Barreto from the comments:

Another way of stating it is that the projection of the tunnel in the
xy plane should obscure an angle greater than or equal to 180 degrees.
However, any such tunnel is 70mm or longer. Hence, since a curve is no
shorter than its projection, it should also be 70mm or longer

Let us assume a horizontal 'base' plane through the centre for convenience. Let us mark north, south, east and west on this plane. If we rotate the plane along the north-south axis, we come across a number of planes, each passing through the centre. The worm must reside in all of them. Hence it must reside in the line of intersection of these planes (the N-S axis).

Now we bring back our plane to original state. We rotate it by a small angle on the east-west axis. Now we again follow the procedure above (continuous N-S rotation) again, and get a new line of intersection of the new planes. We bring it back to initial state, make an E-W rotation of different angle, and then repeat the same N-S rotation procedure again.

By repeating the above two steps a number of times, we get a number of lines in which the worm must reside. All these lines reside in the same plane (Perpendicular to the 'base' and sharing the N-S axis).

The worm must pass through every line passing through the centre of a given plane perpendicular to the base plane. Hence we could have started with any base plane, we could end up with any perpendicular plane. Hence the worm must reside in every line (not just plane) passing through the centre of the sphere. I don't know the proof to this being impossible, but it seems quite obvious that this is impossible.

I don't believe it can be proved; not mathematically at least. This may rely a bit on wordplay, but I'll give it a shot.

The situation posed does not seem to unambiguously declare that the worm ever left the apple; only that it burrowed through it, and the length of the resulting tunnel was 69mm. Here, I am interpreting through as within. For example, a termite can burrow through the wall of your house, reside between your interior and exterior walls, and never leave.

With this in mind, out of all 69mm paths within the apple, at least one of them must go through the center point. Some more wordplay results in two different outcomes:

Again, if the worm never left, AND has reached the exact middle of the apple, then no matter which way you cut it, it will have at least a little bit of worm in it. This worm need not travel in a straight line either, he could curve up, down, left, right, or even tie himself in a little knot.

It is fairly simple. Draw a line from point P to Q pick the point in the middle of the line. This is the point X. Now point X is an axis of your apple - cut apple in half across the axis. As worm has done a path shorter than diameter there is no way it could get to the center of the apple and get out of it.