Wanda the Wanderer is driving the streets of Gnu York. She doesn't know the what the entire map of Gnu York looks like, but she knows this much:

Whenever Wanda reaches an intersection, she decides whether to go left, right or straight according to the repeating pattern

Below is a an example of what Gnu York might look like, with $\color{red}{\star}$ being city hall, along with how Wanda's path would start out. However, your proof should work for any road layout which obeys the given rules, not just the one below. 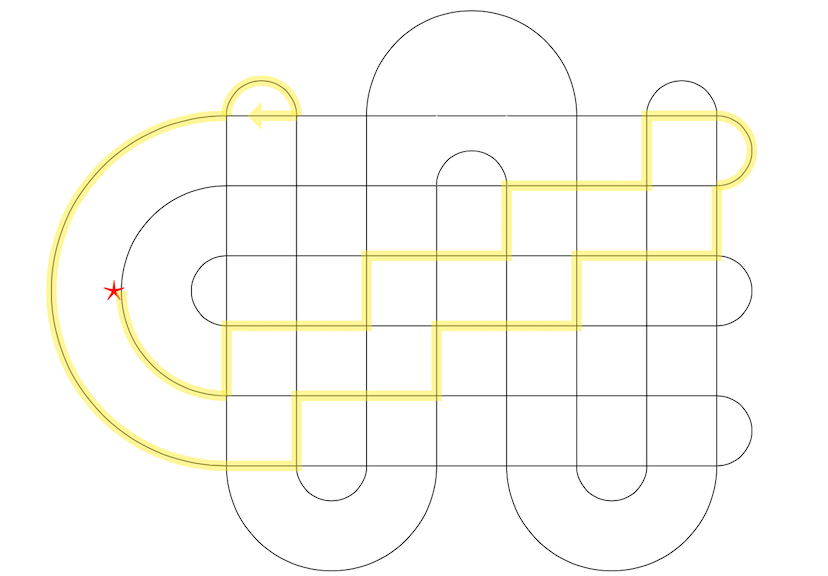 There are a finite number of states she can be in, where a state is determined by direction, road, and upcoming turn. Each state has a unique predecessor and successor; therefore, there are no branches in the directed graph of states as vertices and edges connecting each state to its successor. This means every state must be part of a cycle.

There's only two possibilities for such movement.

Option one is that Wanda never hits an end of the path, going on left-right-straight (which is impossible, because it's countered by the requirement that the number of intersections is finite).

Option two is that she at some point hits a straight that she's already been on. If it's arrived to and passed along on in opposite direction, then every left turn has a corresponding right turn when she was there the last time. It means that she's bound to arrive at the point of origin, hence undoubtedly passing the city hall again.

Now, is it possible to get to the same street in the same direction without traveling back along it first? No, because that would contradict the patter of left turn being a right turn when traveling back. Once she's hitting any street she's been on (as shown in the first paragraph), she's unable to follow other path than the one she's been on (but in the opposite direction).