How do I solve Oskar van Deventer's Gear Shift puzzle?

Oskar van Deventer's Gear Shift is a somewhat difficult puzzle to figure out how to solve. The puzzle looks like this: 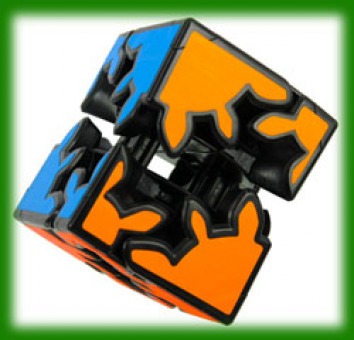 You can see a video of it here.

What is a simple, intuitive method for solving this puzzle? I'm sure the optimal solution could be reached via matrix reduction, but I'm asking for something which is intuitive to understand.

Solving this puzzle is actually rather easy once you know how, but first, we need to establish a couple things:

I'm going to use the standard L/R, U/D, F/B notation for twisting the puzzle; however, you'll note that the puzzle pulls apart along the three axes. In order to execute an L move, for instance, you will need to pull the cube apart so that you can easily make the move. This is implied by the move.

If I want to indicate a rotation of two ticks, I will write [face](2); for instance, L(2) will say to turn the large gears on the left side clockwise by two ticks. I will always standardize the rotations to those of the large gears for convenience.

Solution to the puzzle

It may happen while solving this puzzle that you encounter a position in which the puzzle is already solved and you need not go on. If so, congratulations!

The first step to solving this puzzle is trivial. Pull it apart along the left/right axis, and turn the two sides until the top two pieces line up with each other. Then, push the puzzle back together. Once this is completed, the top four pieces should be solved.

Flip the puzzle over. Separate the four solved pieces from the four unsolved ones, and turn the unsolved side until at least two of the pieces are solved. Push the puzzle back together. You should now have six pieces of the puzzle solved.

In other words, for each two spaces you turn the large gear, turn the small gear one in the opposite direction.

Separate the face with the two unsolved small gears, and rotate it until one gear remains unsolved. Position that small gear such that it is on the bottom front right. This small gear will be N ticks away from a solved state. Perform the following move sequence: U(8N) F(-8N) R(-8N); each 8N is a full revolution of the large gear.

Once you have done that last move, the final corner should be rotated in place and the puzzle should be solved.