There is a line of infinite length (about zero thickness) in a 3D space. It can rotate or move across any plane at any speed. Every point (flagged or not) that has already been visited by the line cannot be touched again.

Your mission is to set flags on specific points in space. As you set each flag, it will move until it touches the flag. Then you set another flag, and so on. You cannot set a flag on a point it has already visited.

Is it possible to make it impossible for the 'line' to reach a flag, after a finite number of flags?

Answer the same Q for a line of finite length.

No, it is impossible to block off the line from any point, whether the line is finite or infinite.

Say you have some maze path M already dragged out by the line. Because no two "walls" may be adjacent (there is always a gap between them), it is always possible to go back arbitrarily close to any point on M by backtracking.

Now, pick any point P in the space not intersecting with M. There must be another point S on the path M that is the shortest distance to P. Since we can always backtrack, we trace M back to any point between P and S, and then we have a straight shot to P.

I don't have a mathematical proof, but merely an explanation:

Assume the line never rotates (it doesn't need to, since you only set new flags after it reaches one). This reduces the problem to a point in 2D space. However, since you can't place a flag on a visited point, you can never "cut off" the point and stop it sneaking between the gaps in the "walls" it's left behind.

A couple of changes would drastically alter the problem:

However, if you could set more than one flag at once and it couldn't, or had to touch them simultaneously, you could force the line to rotate.

I sketched a playing stategy for the line. It's pretty complicated, but if I didn't miss any point, the line should be able to reach the flags, no matter where they're placed.

In order to evade getting in a locked position, the line needs to restrict its movements in a way such that the projection of the set of all visited points into the horizontal plane has a total area of zero (i.e. It's a curve). This way, it will always be able to escape by going up or down from the neighborhood of any point in the plane.

To show that any flag is reachable in this way, first notice that the ones in unvisited areas are trivially reachable within these constraints: As long as the line is kept vertical, its shadow will not sweep any area on the xy-plane. For areas which have already been passed by, the mechanism is slightly more complex.

Suppose, now, the flag lies on the curve. It can be shown, upon suitable tameness conditions (piecewise differentiability), that there can be found in its neighborhoood infinitely many line segments of unvisited points. These correspond to vertically unbounded areas which are completely free for maneuver. They can be reached from above or below by using the escape method explained at the start.

Consider one of those areas. In the worst case, every point directly above and below the flag is already visited. But by simultaneously moving forward, up/down, and tilting the top it is possible to make it reach the goal. After that, the vertical orientation can be restablished without self-intersections, by going backwards, tilting back up and moving downwards fast enough to compensate.

This entire process can be done in arbitrarily tight horizontal spaces, by shrinking the tilting angle (tilting less). Since the only rotation involves the plane of movement, it preserves the property that the projection of visited points forms a meagre set.

Here is an illustration of this mechanism: 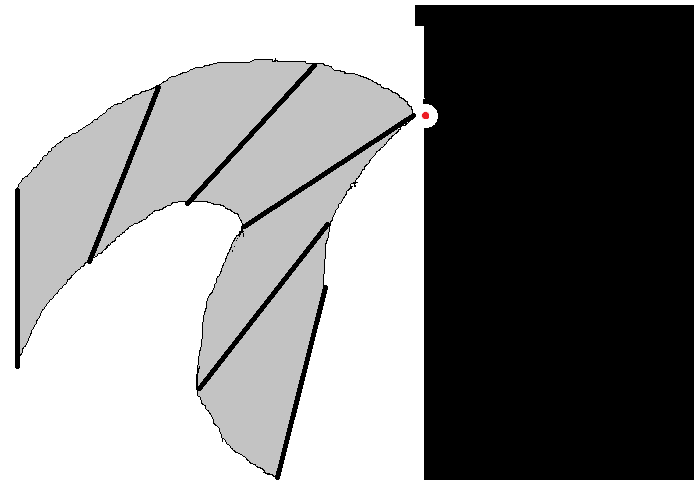 Please, don't comment. I used all my drawing skill to make this one

Not the answer you're looking for? Browse other questions tagged mathematics geometry visual or ask your own question.