Make a wide tower of bridge-shapes

In this question, bridge stands for the illustrated convex quadrilateral, constructed from three equilateral triangles. Letters A, B, C, D, E are assigned to each unit length of periphery as shown in the diagram. The dot indicates the location of the center of gravity (COG) of a bridge; when the origin is at lower left, the COG is at (x,y) = $(1, 2\sqrt 3/9)$. An assembly of bridges has a lowermost horizontal base line that is a face of its first bridge. 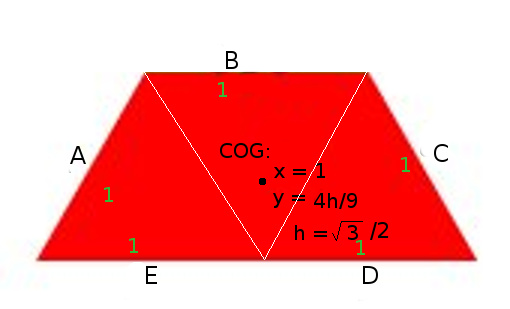 Rules: We allow a labelled side on a bridge to connect exactly to a labelled side on another bridge. Bridges cannot overlap. As pieces are added to an assembly, it must never tip over; ie the x-coordinate of the progressive COG must always fall within or on the base line.

In the diagrams, numbers from 0 to 4 or 5 denote the order in which bridges were added. The path of small asterisks in each figure represents the path of the COG as parts are added. The large asterisk shows the final COG. For example, in the right-hand diagram, the COG first moves to the left as parts 1 and 2 are added, and back to the right as parts 3 and 4 are added.

Notes: (1) The COG of an assembly is the area-weighted average of the COGs of its parts. (Ref: wikipedia) (2) The diagrams were generated as PS files by a slightly clunky python program that I've uploaded to pastebin.

There doesn't seem to be much challenge in this, from a simple base the construction can be extended indefinitely by alternating between adding parts to the right and left side:

I by the way find it easier to calculate the centre of mass by considering each triangle separately, that way all the involved numbers are divisible by 1/2.

Not the answer you're looking for? Browse other questions tagged calculation-puzzle geometry or ask your own question.