Mr. Hilbert and the Problem of the Rogue Resistor

It seemed like a coincidence, but just as Mr. Hilbert finished the checkout procedures at the front desk of the Grand Hotel, the lights went out.

"It's probably the fuse boxes," said Mr. Cantor rather disgruntledly. "I heard our manager fell for a late-night TV ad and bought these cheap fuses for the lights." Mr. Hilbert followed Mr. Cantor to the electrical room. Right at the front of the endless array of metal cabinets was one labelled "LOBBY AND FIRST $N$ ROOMS". On the ground were boxes upon boxes of "KIRK'S ZWEET DEEL FUZEZ $(1 \space \Omega)$".

"It's weird why we didn't switch to circuit breakers yet," said Mr. Cantor as he picked up a multimeter lying on the side. He made a grumbly noise. "Hmpf, seems like the multimeter is almost out of battery. We might not able to measure that many fuses before it dies". He opened the cabinet and grumbled some more. "And what kind of idiot doesn't label the fuses in a fuse box!" Peering at the fuses, his annoyance exploded into incredulity. "AND you can't even see the fuse wire in these fuses!!"

"It's ok," said Mr. Hilbert while mustering with his most soothing voice possible. "If we take out all the fuses and measure them together, we can minimize the number of measurements needed. Here's what we can do..."

Can you figure out the minimum number of multimeter measurements needed to find a single blown fuse $(R = \infty \space \Omega)$ from $N+1$ fuses before Mr. Cantor goes crazy? Can you also prove that your solution is optimal and works for all $N > 2$ ?

Attempt for a 1 measurement solution

I post it as a separate answer because it makes even more assumptions than the first one. Maybe I should limit it to spherical fuses in vacuum?

Assumption 1: The multimeter is accurate enough for following measurements.

On the ground were boxes upon boxes of "KIRK'S ZWEET DEEL FUZEZ $(1 \space \Omega)$".

As I cannot use them to replace all fuses, let's use them for the measurements.

Assumption 2: Infinite supply of knowingly working fuses (they were all tested by Kirk himself).

Assumption 3: All fuses have a resistance of exactly $1\Omega$

Arrange all fuses that must be checked to following groups ordered in a series:

For the measurement arrange all groups in parallel. The total resistance of this setup if all fuses are OK should be $R = \frac{1}{1/R_1 + 1/R_2 + 1/R_3 + ...}$. Based on the difference to the expected value the broken fuse can be determined in 1 measurement. 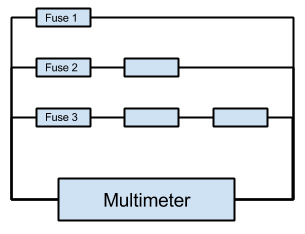 If we have two measurements, we can use the first one to narrow it down to two fuses. A circuit like this can test an arbitrary number of fuses (if there are an even number of fuses, add a fuse in series with the uppermost fuse): 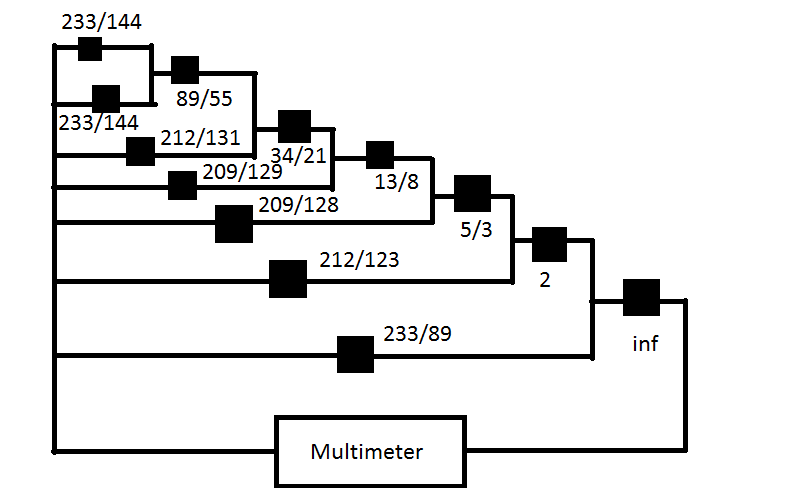 We can interpret these fuses as being in two parallel sequences: one from the top fuse marked "233/144" to the one marked "inf", and one from the lower fuse marked "233/144" to the one marked "233/89". The readings for each of the fuses on the top line being broken increase strictly from left to right. The same happens for the fuses in the lower line, so no two fuses in the same sequence result in the same reading. This means that for any reading, there are at most two fuses (one in the top line and one in the bottom line) that result in that reading, and we can use the second test to determine which.

So we only need 2 measurements (with infinite precision) for any finite number of fuses!

In fact, every fuse results in a different reading when it is broken, except for the two at the top. This is guaranteed by the fact that if we alternate the two sequences of fuses as mentioned above, we get a single sequence that is also strictly increasing. Then, if we replace the top fuse in this system with a new one, we can determine which fuse is broken with only one measurement.

Here is how I would do it (assuming a multimeter which is accurate enough).