Can you stop the rambling rook?

This is a chess puzzle someone showed me a long time ago. If you already know this puzzle please give the others a chance to solve it first. This puzzle was originally created by Otto Gallischek and it was published in Weser-Kurier on 1960-02-25. The problem can be seen here on the website Yet Another Chess Problem Database. It is also featured in this Chess Base article.

There is one small change though-this puzzle has a White queen instead of a rook on h3, as the original problem has. 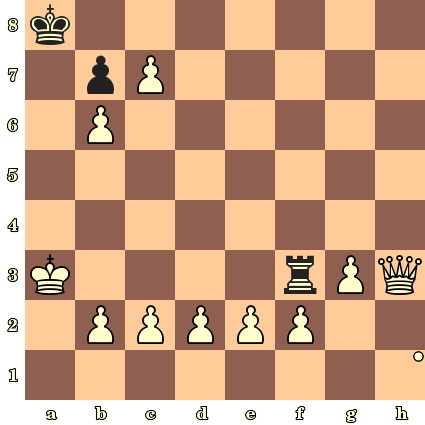 Above you see a position where white is obviously on the winning side. The queen is one step from giving a checkmate. And the heroic h pawn made his way from h2 to c7 and is waiting for a promotion. However, black saw a last chance and moved Rf3+ in the last turn. The rook can't be taken, because black couldn't move anymore which is a stalemate (= draw). If the king moves away the rook will continue to give checks.

Can you stop the rambling rook and find a way for white to win the game anyway?

PS: Computers are not allowed, and no cheating.

If white can ever stay out of check for one turn, then it can promote its pawn and put black in checkmate. So in order to play perfectly, black must attempt to put white in check with every move. In turn, white should make sure that black has only one option for a check in the next move, or else the rook will "break free" and have much more influence over white's moves.

White's overall game plan is to sacrifice pawns and maneuver the king until black falls into a simultaneous capture+checkmate.

Unfortunately, and I'm just going to plain say it outloud, @Kevin's answer is actually wrong, but only by a tiny bit.

As @Kevin originally, and incorrectly, assumed was that the rook had to be captured with checkmate. While that is generally true for most rambling rook puzzles (In fact, Tim Krabbe himself invented the term "rambling rook!), it turns that that is not the case for this particular rambling rook.

The above statement also applies the the assumption that every Black move must be with check.

However, I do congratulate @Kevin im very clearing explaining the concept of the rambilng rook and how to solve the puzzle.

The only part of his answer that is wrong are the last moves of White and Black. Instead of playing 16.. Ra3+, Black has one more trick up his sleeve:

16... Rxc7!, extendeding their life by one more move, and thus invalidating @Kevin's answer.

Here is the corrected solution, in full.

Not the answer you're looking for? Browse other questions tagged chess no-computers or ask your own question.

16
Can white's rook and knight without moving white king force stalemate?
6
The Minimized Dropmate
13
How many total checkmates can you possibly make against the enemy king?
12
Copycat chess is back
2
Pawninos-44 Checks In A Row
6
Pawn Promotion Double Checks
6
De-zephyr The Solution!
4
You Tell Me What To Choose
8
Uncommon underpromotion motive
4
Can you find the key move?