The Temple Of Demdarr, God Of Puzzling (Part 1)

You're a adventurous treasure hunter that just entered the first room of "The temple of Demdarr", an ancient temple in the arabian desert. It is rumoured that you have to pass three tests (three rooms) in order to reach the much sighed-for treasure. No-one has ever even dared to take a step into the temple, as you end up dead if you make the slightest mistake. But of course you are confident in yourself and will try it. You enter the first room and encounter three 10x10 tilings. You realise each section has it's own rule or pattern. Now you just have to figure out which tilings are safe, and which are not in order to get to the next room. (Each unsafe tiling only will be triggered if an/multiple object/s over 1kg (2,2 lbs) is/are on it. You will die if this happens to an unsafe tiling and if you are inside the temple. And no, there is no way to survive it :) (you can't run that fast and you are 259,2 meters away from the entry) )

Movement: In this room you have to bear in mind that you can only move one or two steps horizontally/vertically, and only one step diagonaly.

Visualization (You can only go on green squares): 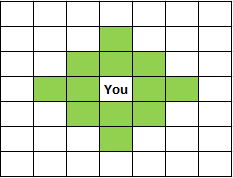 A good answer must contain all the tilings that are safe, wheter it's visualized in an image or you just list them like $(5,2)$ (which would be the square at the 5th column and 2nd row). Or, wrote/described as a vector, 5 to the right and 2 downwards. (from the top left)

If you have problems reading this or you want a more basic version, click here.

(The door to the next room is at the top, so you start at the bottom)

The actual clue is "r*f mod 12 = 0". Don't interpret anything in r and f, these are random variable names because I don't want to give away too much. Why L = 12? You will know that if you find out the pattern in this grid ;)

Actually, this is more of a clarification (I wouldn't have posted another hint so quickly). This grid doesn't have a pattern, although I stated before that every grid has one.

There is more than one pattern in this grid

Answer to the middle grid:

We note that the sequence

Answer to the last grid:

The only exception to this is the bottom left grid, here a field is safe if the value mod 26 is either 18/R or 4/D

Answer to the bottom grid:

3
Find the combination algorithm
10
What is the password to the diamond temple?
4
The London safes and their mysterious combinations
4
Wow, Puzzle. Woah, Numbers
22
The Temple of Puzzling
11
The Realm of Cubic Repetition
9
What is the rule these numbers follow?
8
The Message in the Stars
9
Find The Common Pattern In These Words
4
Sequence of boxes with arrows in the corners