Do you know The Fitch Cheney Five Cards Trick? The following is a much harder twist of it.

Standard 52 cards deck. Magician is outside the room. Assistant asks random guy from the public to shuffle the deck and to select 3 cards from it. Then asks another random guy to select 1 card from these three. Then Assistant lays out the three cards in a row on the table - the last selected face down, the other two face up. Then Assistant calls Magician to enter the room. Magician looks for a while the three cards on the table and names the face down card.

Question: What code is used by Assistant and Magician?

Keep the following in mind:

I think this is impossible, but I hope someone points out an error in my reasoning.

However, there are only $52\cdot 51\cdot 3$ possible arrangements that the magician can be handed by the assistant. This is because what he sees is completely specified by the two face up cards (52 choices for one further to left, 51 for other) and the location of the one face down (3 choices for its location).

Partial answer - only satisfies 1, 2 and 3 and assumes that the magician is permitted the luxury of using a pack of cards that has an assymetric back. I doubt that the audience would be suspicious if this was a otherwise plain back blatantly advertising the name of the show, the magician or the venue.

The magician and assistant have to agree on a suit priority in the event of both face-up cards having the same value. This will allow for one of the cards to be a high card (H) and the other a low card (L).

There are six possible arrangements of face-down card, H and L. Adding the orientation of the face-down card into the mix (^ for upside-down and v for right-way-up), this now gives 12 combinations. If the cards are usually laid close together, the 13th value can be indicated by spacing the cards out a little more. In this last case the order of the cards is unimportant. 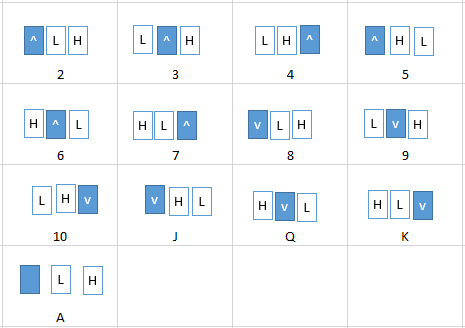 The suit would then be indicated by placing the cards slightly off-centre on the table e.g towards the top for spades, right for hearts, bottom for clubs and left for diamonds

It's not perfect, but will certainly work once and, for most audiences would survive repetition.

So assuming the trick is different over the phone (as the asker has sort of implied?), this would work:

Label the deck in any arbitrary way giving the cards each a value 1-52. Let's say it is Ace->King, Spades->Clubs->Hearts->Diamonds. So ace of spades is 1, 2 of spades is 2, ace of clubs is 14, king of diamonds is 52. Now imagine the table as a 3x3 grid with squares labeled 1-9. When the assistant places the cards down, they can be closest to one of these sections of the table, without being obviously placed there. So now there is a value 1-9 that can be conveyed. There are six ways the cards can be arranged in a row. Label them arbitrarily 1-6. The three cards can be given unique identities because one is flipped, and of the other two, one is higher, one is lower (based on the numbering above). Now there are $9*6=54$ possible combinations of order/location on table. Arbitrarily label those and you have one for each card, plus 2 extra if you use the jokers in your trick.

Just use any vocal queue, like the magician listing off all suits/values

It could all depend how the cards

Number the cards 0 to 51
The assistant then lays down each of the three cards in one of four positions.

Turn this into a three digit Quaternary Number
convert it back to decimal, and match it up with the numbered cards.

This system can actually encode for 64 different cards if you had some weird deck. :)

The table top is specially designed so that it is translucent/opaque from an angle and is transparent from straight on. Below the table is designed a small mirror that is hidden unless viewed from a certain angle.

When the magician approaches the table, he is able to see the face of the face down card. He can then easily say what the card is.

This solution relies on having the audience members do their selecting away from the table, or having a special bottom on the table that can drop away when the magician approaches, obscuring the trick.

As for over the phone, there have been many possible ways given how this could be done.

I think this is a viable solution for over the phone and on the table although kind of complicated.

Now comes the part that feels kind of incomplete or needs tweaking. The suit of the card can specify whether to add or subtract. You will have 16 combinations of Spades, Clubs, Hearts, and Diamonds.

Also think of the deck as circular so if you subtract 4 from 2 you will get Jack. I'm not sure how to justify this reasoning but if someone finds something wrong with it please let me know.

You should be able to get all combinations with that.

Not the answer you're looking for? Browse other questions tagged cards magic or ask your own question.