8 men in a restaurant

I know this puzzle is easy, but I hope it isn't too easy... If it is I really have to work on my puzzle-creation skills :P

8 men plan to go eating to a restaurant, where they will celebrate Mr. Blue's birthday. Here is an example how it could look like: 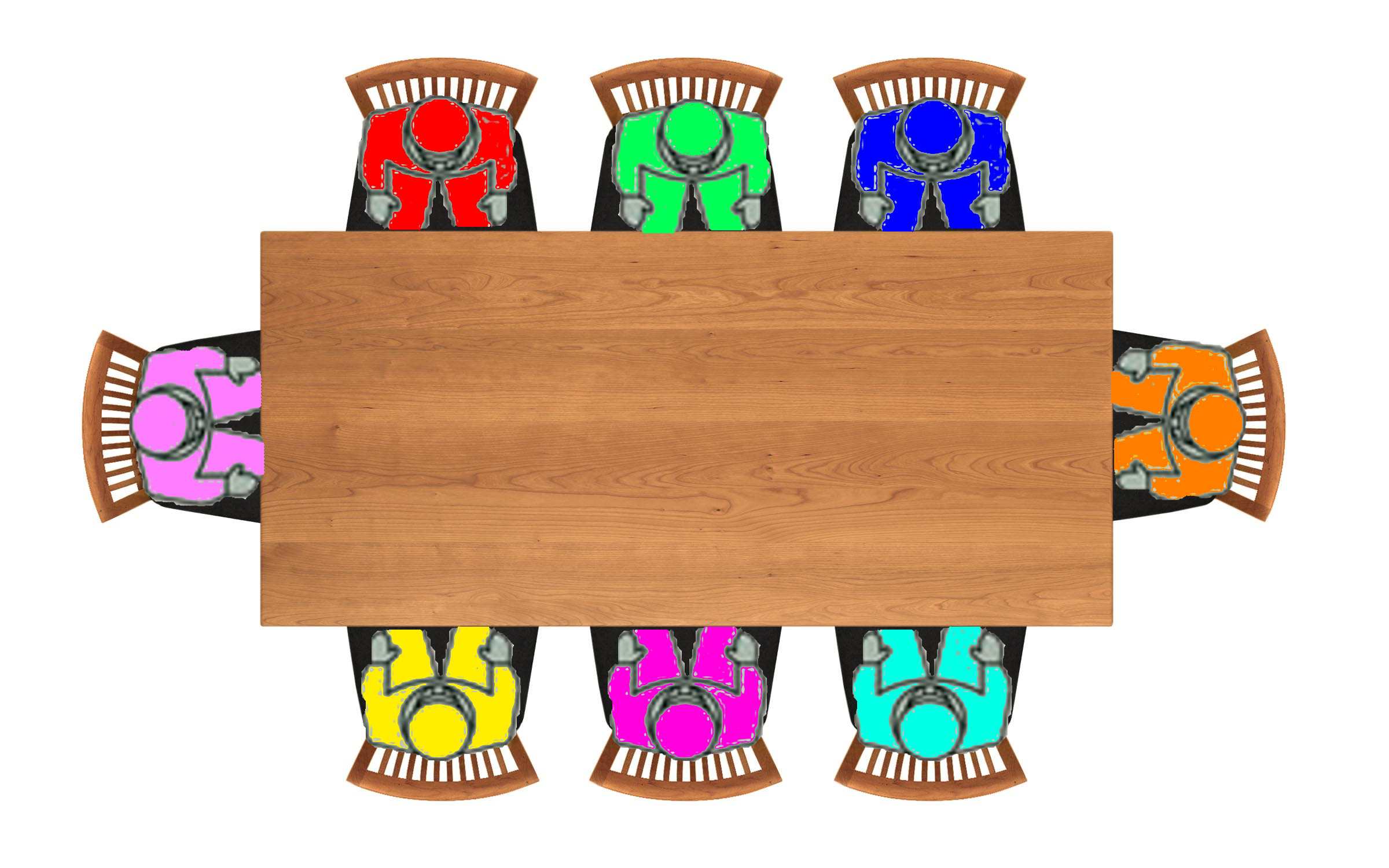 (The above image is just for visualization!) They're still struggling with coming up with a solution so every man is satisfied with his position. Can you help them find (one of the four) solutions only given the preferences of each man? (I will only accept an answer that contains a picture (or code snippet) of the solution like the one above, see "Tools").

Clarification: If you divide the image in 5 columns, the seats inside the first 2 and the last 2 columns are the seats that are at a corner.

I've provided 9 pictures, one of the table and one of each man with alpha channels. This will make it much easier for you to create/get to an answer. All you need is an image editing program. But like mentioned before, I also accept an illustration with text in a code sample, like this:

But I think an image like I made would be nicer for visualization :)

I think there are 4 that satisfy everyone (unless I've made a mistake): 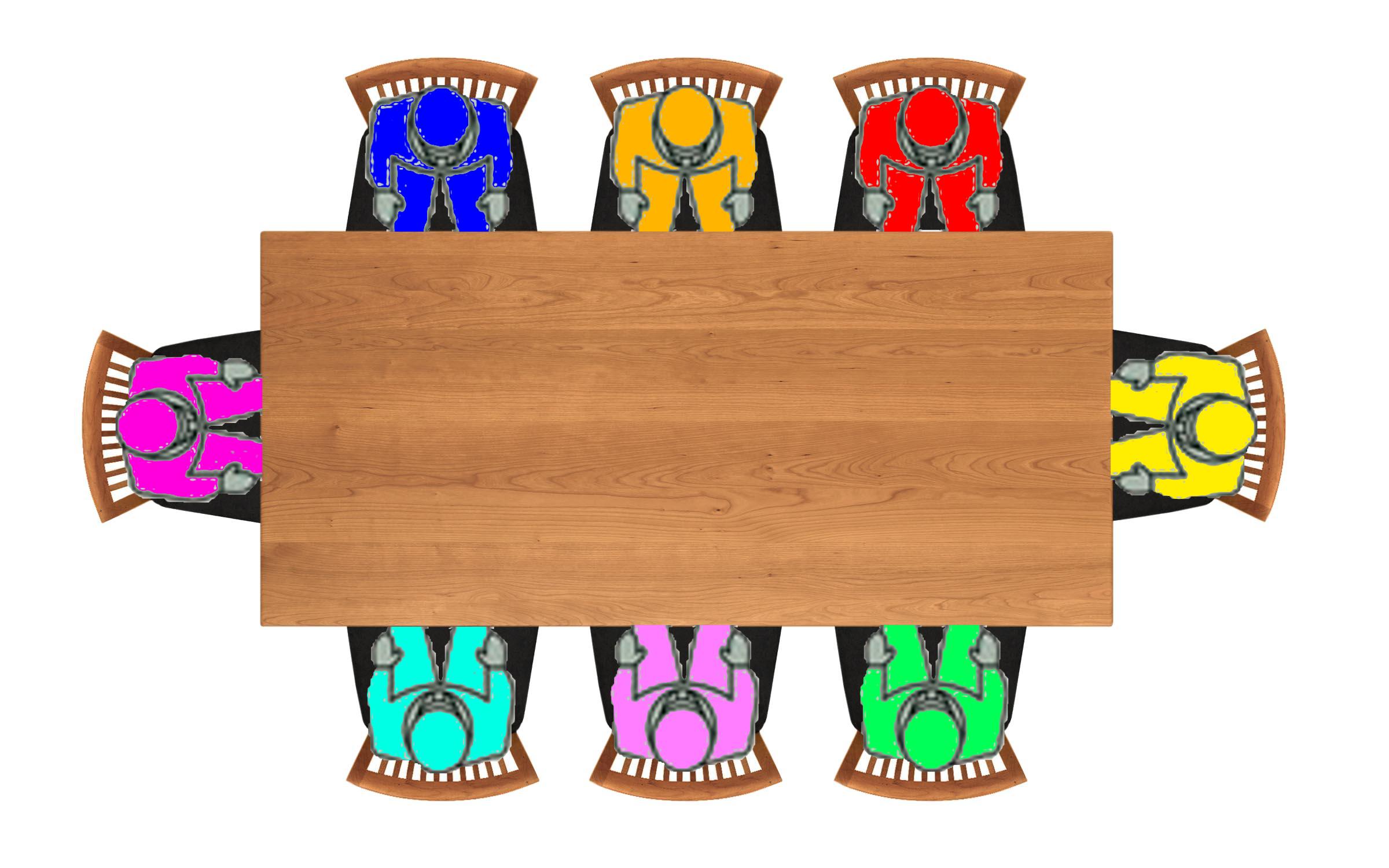 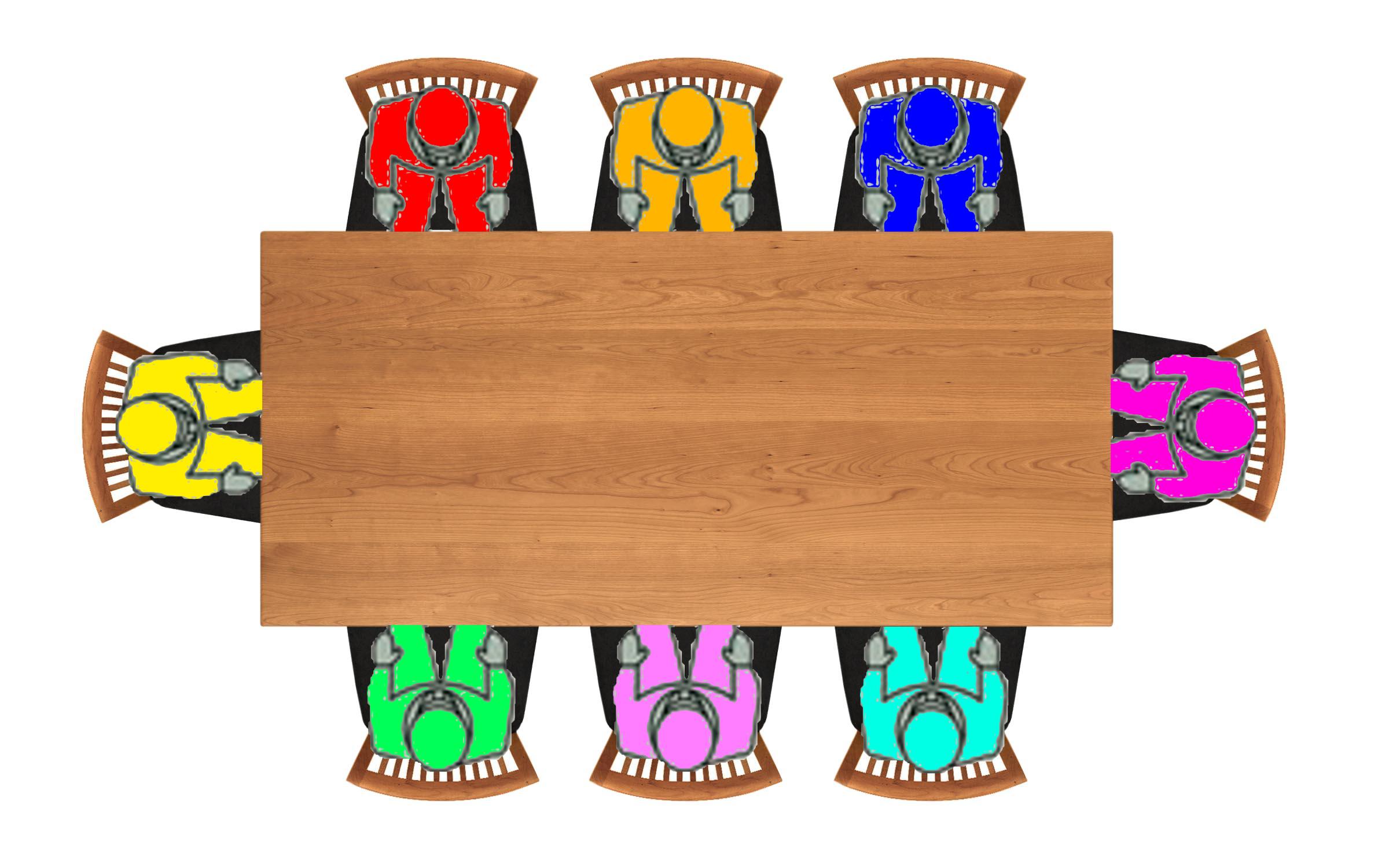 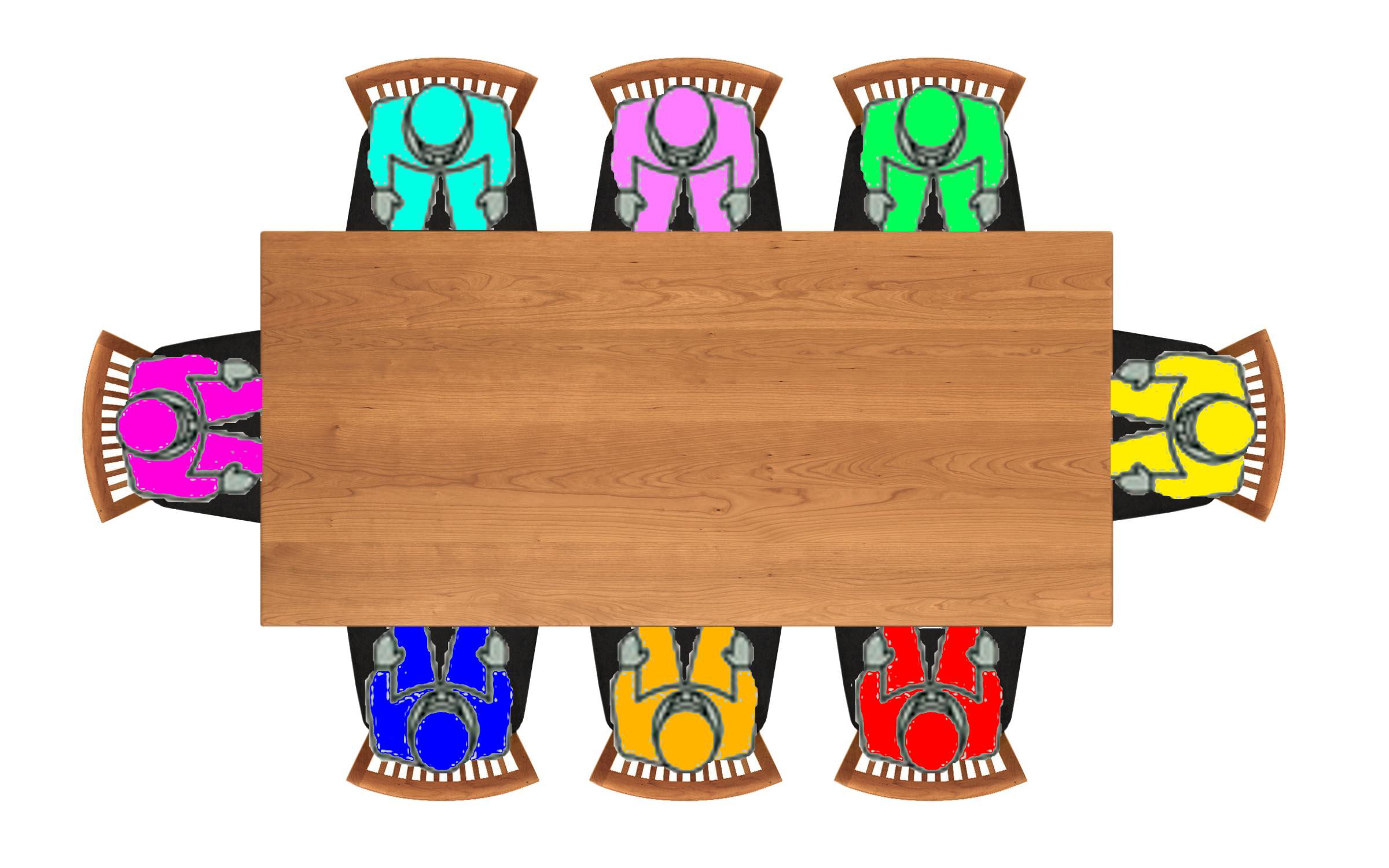 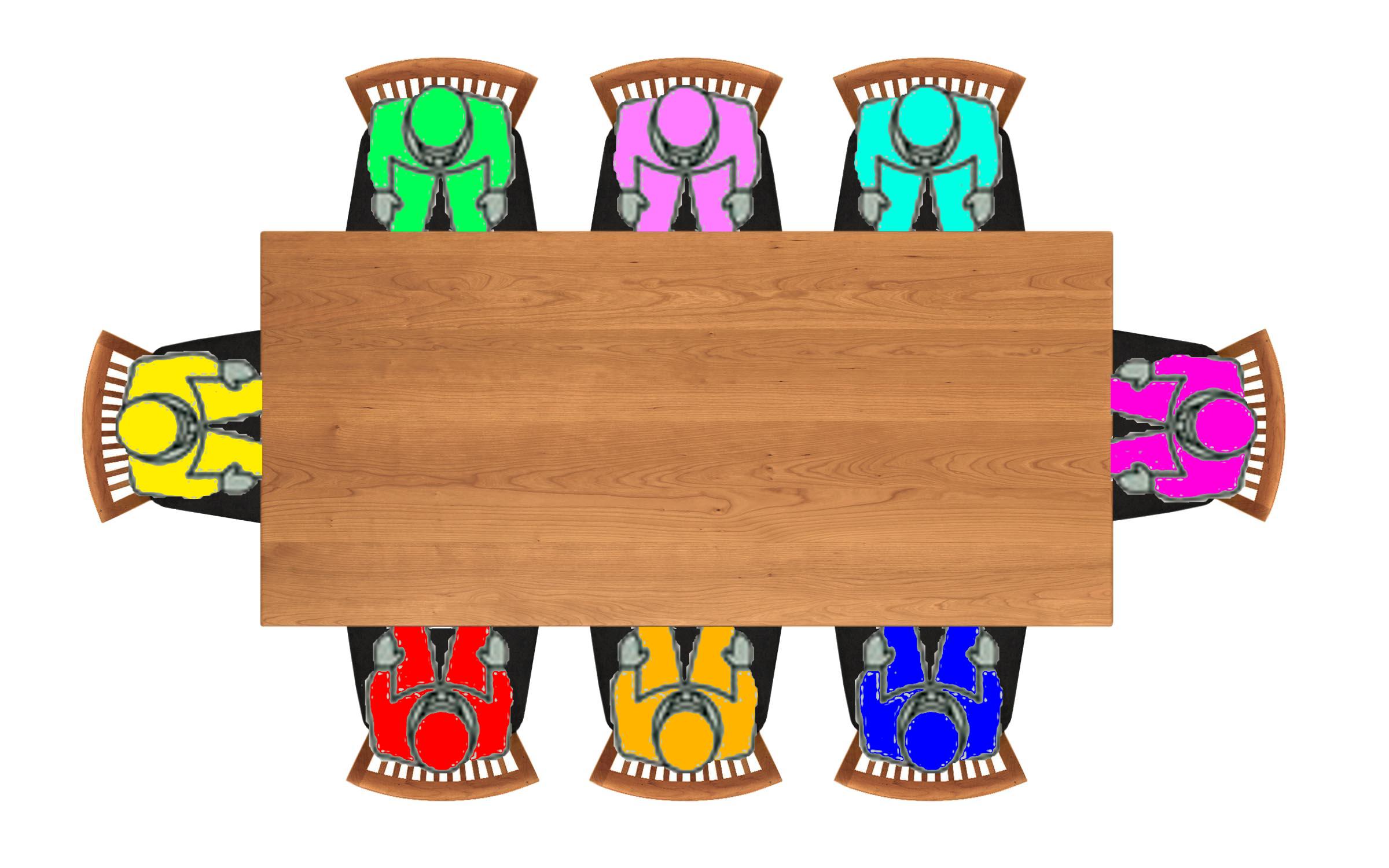 As for approach I figured starting with Pink was good since he only had 2 possible slots, and conveniently he made the Blue-Orange-Red trio work out to be opposite him (because if they weren't opposite him, then Blue couldn't be Opposite Cyan). At that point the rest are really easy to fill in.

Edit: I've changed it to images. Hopefully I didn't mess it up in doing so.

The following seating arrangement will satisfy everyone

How I arrived at this solution: I have to admit that it wasn't the most logically sound method, but it helped me get to a solution right away.

Using clue 1, I arbitrarily put Mr. Red at the top left of the table. Clue 2 put Mr. Green opposite him. Using clues 3 and 5, Mr. Orange came to the middle top position and Mr. Blue to the right top position as Mr. Green already occupied the position two spaces to the other side of Mr. Red. With the top middle position occupied, Mr. Pink could only sit at the bottom middle position according to clue 4. Clue 9 put My. Cyan at the bottom right position. Now, with only two places left, Mr. Magenta had to go to the rightmost seat, because he didn't want to sit next to Mr. Green according to clue 7. That put Mr. Yellow in the leftmost seat.