The cage - a logic puzzle

One summer day John was jogging in the countryside wearing only his normal running clothes (shorts, vest, sports shoes and socks). After running for some time he saw that the lace of one of sports shoes was untied. While he was bending down to tie it up, a psychopath who was hidden nearby, approached him from behind and hit him on the head so hard that John became unconscious.

When John recovered he found that he was inside a perfectly cylindrical room about 20 meters diameter and 5 meters high. The walls, floor and ceiling of the room were perfectly smooth and symmetrical and had no visible feature so it was impossible to distinguish any particular direction inside the room.

Inside the room there was a cage. The cage itself also was in the shape of a perfect cylinder about 2 meters diameter and 2 meters high.

The cage was placed on a perfectly circular platform exactly the same diameter as the cage. The platform can rotate clockwise or anti-clockwise at the discretion of the psychopath, who uses a remote control to start and stop the rotation. The platform starts and stops rotating at a very slow rate of angular acceleration, so slow that someone inside the cage cannot even feel when the platform starts to rotate and when it stops. Also the maximum speed of rotation is so slow that a person inside the cage cannot feel any centrifugal force so he doesn’t even have any idea about how fast the cage is rotating.

The psychopath then told John that he will challenge him to do a task. If he fails he will die, as have many others before. However, if he succeeds his psychopathic ego will be destroyed, John will be released and the psychopath will give himself up to the police.

The task consists of this. Surrounding the cage on the floor of the room about 10 meters from the center of the cylinder there are eight glasses each filled to the top with an orange liquid. The glasses are placed at the eight cardinal points: North, Northeast, East, Southeast, South, Southwest, West and Northwest. One of the glasses is filled up with pure orange juice. The other seven glasses have orange juice with a small amount of deadly poison mixed with the juice. It is not possible to distinguish between the glasses or their contents in any way at all except by tasting the liquid. John is not allowed to go anywhere near the glasses to examine them before the test starts.

The psychopath then tells John that the only glass without poison is the glass placed in the north direction and tells him which one it is.

The psychopath does not allow John to leave any mark or object on the floor of the room by which to indicate a particular direction.

Before the psychopath unlocked the cage door he had already changed his own position in the room to make sure John was totally disoriented when he got out of the cage and had no possible way to tell from his surroundings in the room which direction he was facing.

John was released and the psychopath was put in prison for rest of his life.

How did John manage to succeed in doing the task?

NOTE: Everything that is described could actually have happened in real life on this Earth.

I'm not sure this would actually work but the implied solution sends to involve inertia. Tie a shoelace from the light, dangle the heaviest thing you can from it, and note how it deflects when the cage rotates. The issue is how to make this system freely rotating/friction free to keep the (likely) shoe from rotating.

Since we don't have any visual cues to measure the end orientation, John needs some way to judge how much he rotated. That'd require very good timekeeping and some way to measure the angular acceleration. We'll assume that John has perfect mental and physical skills and can track time, angular displacement, etc exactly. The first idea would be to hang one of his shoes from the lightbulb and measure the deflection from vertical. There's a couple of problems with this, though. One is that there's a lot of friction, and two is that since the lightbulb is in the center of the room the shoe won't actually displace. It will rotate, but it'll be very hard to make the shoe start out perfectly still, plus at some point the torque in the shoelace will mess with the rotation calculations so that John dies at the end. So what can we do instead?

John starts juggling two socks in one hand. The socks are "almost always" in free motion, meaning they'll start revolving independently of John. If he walks a little to properly catch them, the angle he makes with the center of the room and the door will roughly equal the amount the cage rotated (although in the opposite direction). He can keep doing this until the rotation stops and calculate how much the cage rotated overall in order to find true north. A cool consequence of this solution is that if the cage remained still but the rest of the room rotated, then John would be out of luck.

If John could also throw and catch objects perfectly, he can do this without juggling by throwing a shoe into the air with no angular momentum. The amount it rotates before he catches it, then, will be the amount the room rotates too.

John enters the cage, noting the orientation North, stands in the center of the cage facing north and waits. As soon as the light comes on, he starts hopping in place, up and down.

Since the cage is spinning so slowly, and the amount of time John's feet contact the floor would be minimal, John should be able to keep his north-facing orientation.

Once the cage is opened, John knows which way is north, and drinks the glass in this direction.

Remember, John is a runner, likely in good shape, and shouldn't have any problem jumping in place for a few minutes at a time when his life is on the line.

This is the best answer I can come up with (thanks to the person who suggested juggling).

He can repeat this process as many times as he wishes, since the would-be killer is content to keep giving him plenty of fluids throughout the process.

John speaks a language with absolute frame of reference such as Guugu Yimithirr or Tzeltal (so he ordinarily speaks of his north foot and south foot, or his east foot and west foot). Speakers of these languages have been shown to have a strong internal compass. As such, John always knows which direction is north.

The only static element inside the room who could be used as a reference is...

The light bulb filament, so after the psychopath tells John about the glass, he can look up, check the filament's direction (which given it's particular shape can be used precisely to reference that glass) and do whatever he likes during the psychopath's master plan, and then safely drink the unpoisoned juice from the correct glass. The flaw in the psychopath system is the light bulb rotating with the entire system and not fixed or static.

Simple... no magnet, no laces required :)

The steel cage is offset from the center of the room, thus creating a reference point to compare the distance of each glass to the nearest wall of the main room.

Exit the steel cage and just look ! (drawing has exagerated proportions to relate the idea - the op does specify room is "about" 20m diameter, and glasses are "about" 10 meters from center of cage...) 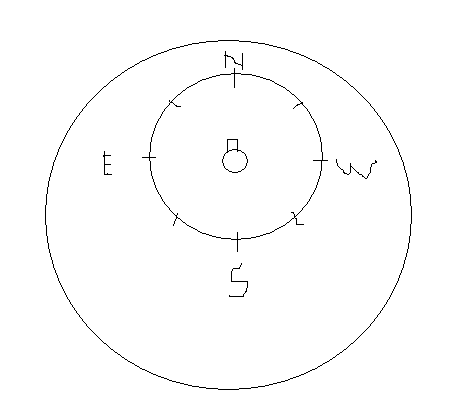 The correct tool for the task is ...

He ties a heavy object to the lamp and let it swing. The torque on the shoelace is enough to turn the object itself, but not to change the direct

I've seen the above answers but I have another solution. If John can throw something in the air perfectly up just before the rotation starts, maybe a hankerchief parachute, if the object is perfectly symmetric and the throw is perfectly up, then if the object falls slowly enough, he can note how it rotated in relation to him, (may require a pattern on the hankerchief).

13
Red and Blue in the Chocolate Fountain Room
17
Infinite precision
38
XKCD inspired logic puzzle
8
Mr. Jones and the logical conundrum
7
Should Dr. (Indiana) Jones do it? Another Jones Adventure
4
Reena and the doors. How many?
4
A locked room puzzle
9
Poisoned Glasses on a Platter