A good puzzle is a double-edged sword

A rare double-edged sword is currently on loan from the British Museum to the Magna Carta exhibition.

The sword itself is described as likely made in Germany around 1250-1330 and includes the inscription pictured below. 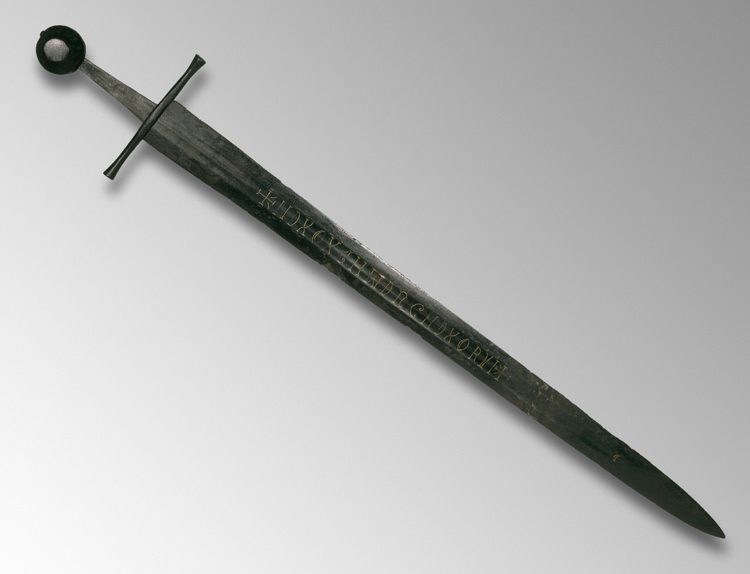 So what does +NDXOXCHWDRGHDXORVI+ actually mean?

I started by researching futhark, Germanic/Teutonic, Anglo-saxon runes. I don't interpret the characters too tightly as "modern" letters. (Note: These are stylised characters, bull past the flair to "see" them.)

The crosses ARE Greek as suggested by a few commentators in the article linked to in OP. I don't see how the crossbars at the tips could make it mistakeable for a maltese cross, which debunks the argument for an Islamic origin. My reasoning being the level of craft involved in the rest of the inscription suggests that had the artisan intended to inscribe a maltese cross, he would have done so properly.

Another commentator high-signing PhD cred suggests the crosses in opening and closing to be the wrapper on the benediction, In nomine Patris et Filii et Spiritus Sancti, Amen, which would make them characters as well.

If I'm on the right track the first few characters seem to be more like HDGOG, I might be off on the O, I think the tenth character may be a U. The mystery character R #11 may be a "lowercase" N, which would make sense in that the name/title of Christ is still subordinate to the name God.

Now, runes are also still believed to possess magic properties, it's likely that this inscription may be a name for the blade, a prayer, or a "spell". Runes, besides being the regular writing of the people/tribes who regularly used them, were also viewed as mystical/magical by those from other tribes/groups. So I think that's a good place to start.

Beowulf would be a good primer, Beware Grendel....

It's thought that a mixed cipher kind of thing might be going on here between the meaning of individual characters and some peppering with Latin maybe?

There is some suggestion the X character is a separator, otherwise the first letter of the name/title of Christ. X = C

Now, here is my first bit of guessing based on the rune theory, the first two letters from the Gothic Rune chart (linked above)

Going back to the suggestion of the cipher/Latin peppering-

This is not the craziest theory, but we are talking about a sword here. An incantation/inscription evoking the spirit/magic of death is not unreasonable. Those are rough translations of what those characters actually mean in runic context.

See this page for a listing of "known" translations of similar inscriptions.

This section will be for manipulations of the "translations".

Word of the Dei... xD , sorry, [H]omoousios homoousios (Greek: “of one substance”) The XCH of the inscriptio has me reaching, > true, but i think i am following the right track but don't quote me on quod ! xD

NOTE: The n character in oranipotentis seems to function as a connector with no other value. I wonder if it works like a bindrune ?

An interesting note on both the bindrune thought and some [further] Greek connections come by way of the chi-rho symbol, see the spelling Xpisti below, which looks a little odd. ?

I will temporarily add this idea to my translation in progress but i am not settled on it. See consubstantiality .

From the Russian site;

+NDXOXGHMDnCHDXORVI+ <---this is from that site of known translations at the end of section one of my answer.

I think the "W" could be attributed to illiteracy or the error that comes with repetition. The "lowercase" is probably what i thought it to be.

I'm still puzzling out particulars, there are letter "substitutions" and so, "alternate" spellings to sort through.

Google translate is a HORROR! [OMG] Any clergy worth their salt should go there and start fixing it, please!

Based on the suggestion by commentator Philip Seddon , The latter "H" characters may be seen as indicators of a feminine denominator, meaning N = H as covered earlier in my answer on the subject of runic characters interchangeability/similarity/substitution etc..

Also, the subject of the misidentified "R" being a "lowercase" n and, the "C" later "G" actually being "G" later "C", AND, on my almost certainty that "X" is not a "placeholder/seperator" but an alternate "C" and lastly the "W" being downside-up "M", although I believe a double "U" e.g. "VV" could be just as like but, I couldn't see/find a fit.

I'm still not satisfied with my answer and have clearly hit my limit of skill with this. I hope that by turning what i have so far over to Community Wiki [and a penalty free format] will attract some more users willing to jump in. It's a neat mystery and I want to know what the inscription actually is.

There are no satisfying explanations as to why most blade inscriptions are incomprehensible. Of course, it is likely that the sword smiths who did the metal work for the inscriptions were illiterate; however, the craftsmen could not have failed so regularly and ruined so many valuable blades with illegible inscriptions.

Most epigraphic scholars suggest an initial-based abbreviation system; however, this thesis is only to be proved, if the inscrutable alignments of letters could be assigned to a common prayer, psalm or bible quote. This was hitherto only possible, if the inscriptions consisted of (at least some) full Latin words and not only initial sequences.

Wegeli himself and Erben tried to relate the suspected initials with a prayer or a sentence spoken in conjunction with the sword presentation ceremony or in German Schwertleite . This was a ritual, probably of Germanic origin, in which the father handed down the sword to his grown-up son as a sign that he can defend himself and the tribe.

During the Middle Ages the sword presentation ceremony, performed by the liege lord or a cleric, put the warrior into service of the former, as a vassal in the first case or as a miles Christi ad servitium Iesu Christi (soldier of Christ in service of Christ) in the second .

Unfortunately, as yet it has not been possible to identify such a traditional type of ceremonial dicta latina that was carved on a sword blade. Moreover, this theory presupposes that the inscriptions were generalized. However, quite conversely, the inscriptions (even though sometimes showing a constancy of letters) are extremely variable and appear to be very personal. One might say the individual secret of every sword bearer. It must have been a special dictum so obvious and so self-evident to him that it was not necessary to spell out its significant meaning.

Not the answer you're looking for? Browse other questions tagged history real unsolved-mysteries or ask your own question.