Drawing lines on a map

This was a puzzle that appeared in an old math contest as well as an unrelated puzzle book.

Suppose we have a two-dimensional map with a lot of cities marked on it. For each city on the map, we draw a line segment to the city nearest to it (we assume that there is always a nearest city and that no two cities are exactly the same distance apart from any third city). Prove that no city will have more than five line segments connected to it.

I seem to remember that the proof involved triangles, but to this day don't know the whole proof.

I'll assume the cities lie on a flat plane, which seems to be the most reasonable interpretation of the question.

Let's assume (for contradiction) that we had a city which is connected to at least 6 other cities. First, note that this implies that no two cities lie on the same ray extending outwards from the central city which I'll label as $0$. Picking the closest of these six cities to be $1$ and label the cities counterclockwise starting from the ray $\vec{01}$ as $2,3, \ldots, 6$. Now $0$ and $1$ are connected since $1$ is closest to $0$. For cities $2, \ldots, 6$, the only way they can be connected to $0$ is by being closer to $0$ than they are to any other city. Here's a conceptual diagram: 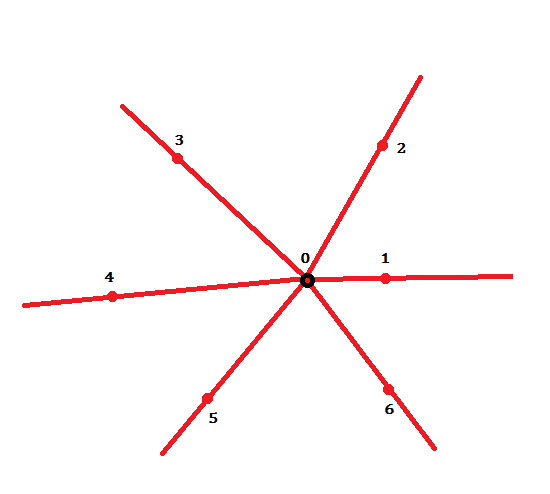 Hence, it's impossible for any city to be connected to 6 other cities this way.

I'm not sure this is rigorous per se, but I think it's accurate.

Consider some number cities arranged in a circle of radius $r$ around a central city (the "most connected"). The furthest these can be from each other is when they are distributed equally. When there are six cities around the circle, they are all at a distance $r$ from each other. Since each of the cities has exactly one closest city, there cannot be six cities around the circle. If there were more, they would be closer to each other than the central one, so there are strictly less than six cities closest to a single one; since we're working in integers, that means at most five.

7
Smallest number of matchsticks for a 3D structure with 6 matchsticks at each vertex
7
A purposefully obtuse Euclidean geometry riddle from an old interactive fiction game
15
Can this be solved without brute force?
2
The square and the compass II - Midpoints
7
What's the most complex pattern to decipher if you have seen the pattern
6
A construction on an infinite 2d grid, part 1
8
Three lines through a square
7
When is a robotic arm able to reach any point (closer than the length of the outstretched arm)?