After the zombies ate your brain at the end of level 1, Dr. Zomboss decides to continue sending his legions of undead until they completely destroy your house. At every 4 seconds, he drops a new zombie on some unoccupied spot of your lawn. All zombies move towards the left and each of them needs exactly 4 seconds to traverse through one of the spots on the lawn. Show that after some time T, the total distance traveled by any 1000 consecutive zombies will be almost the same - within range of just 32 spots. 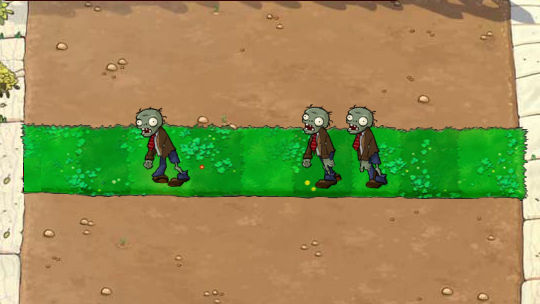 You don't need to be able to point out when the time T comes, just to prove that it exists.

You may want to use your photo camera extensively.

P.S. Unfortunately I can not take the credit for this puzzle. I just simplified/modified a problem from some Math competition, which made the original question easily approachable. I believe that in the context of zombies, it is not that hard to figure it out (but still not that easy). Later will post reference to the original problem.

The number of zombies on the field never decreases.

This is obvious since each step adds one zombie and removes at most one. However, since the number of zombies can never exceed $9$, it follows that, after some time $T$, the number of zombies on the field is constant*. We will prove that zombies created after time $T$ satisfy the desired condition. After this point, the following rule must be observed:

If there is not a zombie at the leftmost plot, a zombie must be added there.

We must follow this as otherwise one would be adding a zombie without removing one.

This suggests to us we want to find some function which takes a state of the game as input and tells us how much "debt" we have to repay (we might also call it an energy function). We will define a state as a subset $S$ of the squares in the garden, representing the set which are occupied by zombies right before a new one is placed. Note that thus the rightmost square will never be occupied, as a zombie placed there immediately wanders left and that if there are $n$ zombies $|S|=n-1$ since the state occurs after a zombie has just walked off and before its replacement is added. A legal transition from $S$ to another state consists adding a new element, then decrementing all the elements and removing $0$ if it appears. We wish to find a function $E_n(S)$ on states such that $|S|=n-1$ which satisfies the following crucial property:

This is to say we are measuring the difference between a given move and the allotment of zombie steps - so if we've got "too many" steps $E_n(S')$ will be more than $E_n(S)$. Notice that this defines $E_n$ up to a constant factor if it exists at all. One may explicitly compute it by choosing $E_n(S)=e$ for some arbitrarily chosen $S$ and $e$ and finding the energy of all states reachable from it - and thinking about that idea for a second leads us to the following valid energy function: $$E_n(S)=\sum_{s\in S}s$$ One may check that this satisfies the desired condition.

(*More strongly, if we consider a game state to be the set of plots on which zombies lie and say $A\sim B$ if state $A$ could occur after state $B$ and vice versa, then it happens that $A\sim B$ is equivalent to $|A|=|B|$ meaning that the number of zombies is essentially the only invariant of this type - so we're in trouble if this $T$ doesn't cut it!)

@MiloBrandt already posted a solution (make sure to upvote him!), but I wanted to give an alternative explanation.

As Milo noted, the number of zombies never decreases and therefore at some moment it stabilizes, say at $1 \leq K\leq 9$ zombies after time $T$.

Now consider any $1000$ consecutive zombies appearing past time $T$ and take a picture of the lawn in the moment each of them gets dropped on it - this makes a total of $1000$ pictures. Since on every picture there are exactly $K$ zombies, we see exactly $1000K$ zombies on all pictures.

Now notice that almost all of the selected $1000$ zombies appear on as many pictures as lawn spots they travel. The zombies for which this is not true are just the $K$ zombies, which appear on the last picture. We easily see that they have traveled between $1+2+...+K-1$ and $(10-K)+(11-K)+...+8$ spots more than the number of pictures they appear on.

This problem was supposedly the hardest question from this year's IMO, but thought it could be translated into a nice puzzle. Hope you liked it. http://imo2015.org/solution.php?lang=en

Once again, make sure to upvote Milo's answer, as he uploaded first a legit solution.

12
Ernie and the Orthogonal Network
53
The Case of the Miscalculating Calculator
20
Ernie and the Alien Invasion
8
The Magician's Card Game
26
Stargate escape
20
Ernie and the Uneconomical Flat-breads
9
A differential equation with a hidden sentence
39
Ridiculous problem from an old maths textbook
5
Thick as two short planks
9
Plants vs Zombies!