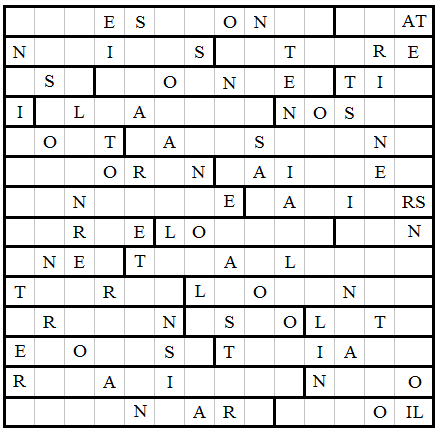 Similar to sudoku, the objective is to fill every row and every column with the letters $\rm{RELATIONS}$, with each letter appearing exactly once per row/column. Only one letter may appear in each cell (excepting the last column, which has already been filled out).

There are two novel elements, however:

Generally speaking, the words in this puzzle should all be very familiar to English speakers, with the exception of $\rm{TI}$ and $\rm{NOS}$ (which have already been filled out).

Valid words may have gaps in them, but letters must appear in proper order. For example,

are both valid entries for $\rm{TEAL}$.

Can you complete the sudokross?

Readers have probably noticed that the final column in the puzzle is "fat" in the sense that it contains two letters in some cells, which is less than ideal. This is a consequence of my lack of foresight while constructing the puzzle. In particular, I didn't manage the gaps in the columns as well as I should have.

A perfect sudokross is one where no "fat" column(s) appear, in which case the grid is perfectly square and the same number of gaps (empty cells) appear in all rows/columns.

Also, a note on terminology: the "root" of a sudokross puzzle is the set of letters that appears in every row/column. It need not be a valid English word, but making it so helps with the aesthetic of the puzzle. For example, the root of the puzzle above is $\rm{AEILNORST}$, which I anagrammed to $\rm{RELATIONS}$.

On Thursday July 30, 2015, I will award 200 rep to any puzzler who presents a (valid) perfect sudokross where either:

The root of the puzzle may not be the same as for the puzzle given above. 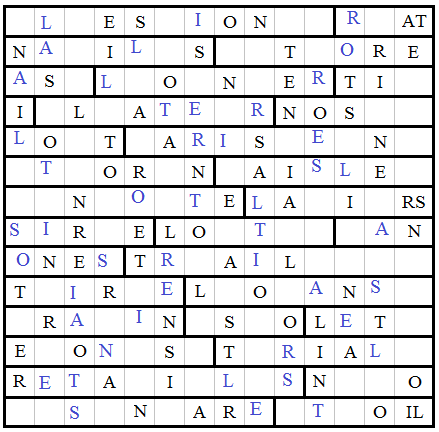 Because every row is an anagram of "relations", it isn't hard to figure out what words go in each row and then fill in which squares they are in. I think it would be interesting to see vertical words or even some kind of "bent" boxes (like in KenKen).

Not the answer you're looking for? Browse other questions tagged puzzle-creation crosswords sudoku or ask your own question.

9
What is the maximum number of empty 3x3 blocks a proper Sudoku can have?
7
How do I necessitate the use of the X-Wing pattern during Sudoku creation?
10
Largest crossword puzzles without blanks or blockers
0
Find the missing letters
7
Minimum steps to verify a Sudoku solution
22
There is a reason sudoku uses squares
8
Can you solve the 7x7 (sudoku-ish) centered sums puzzle
65
Happy Pi-Day! Try to solve this "PiDoku"
4
Was "Crook's algorithm" for Sudoku really only developed in the 21st century?
9
Sudoku: Episode 64 - Attack of the Clones