Twelve balls and a scale

We know that the first step will remove either 1/3 or 2/3 of the possible solutions, no matter what you do. This means that, in the 1/3 case, you need to split the possibilities down from 8 into a group of 3, a group of 3, and a group of 2. From this, the third weighing points to the odd ball out. Because this case implies one set of balls is heavier, by virtue of finding the odd ball out, we know whether it's heavier or lighter, so we actually don't need to worry about this piece of information at all.

In the 2/3 case, you need to reduce the possibilities into a group of 3 and a group of 1, which is easy enough to do intuitively. Because we actually don't know the relative weight of the odd ball in this case, the information from the third weighing must be used to determine whether the ball is heavier or lighter.

There is another way to do this problem, that doesn't involve any sort of conditional branching at all. It is in fact possible to set a fixed weighing schedule beforehand and still determine which ball is lighter or heavier in just 3 weighings. I'll explain how below.

The gist of problems like these is, how much information can you get from the procedure you're allowed to undertake? With each weighing, the scale can either tip to the left, tip to the right, or stay balanced. This gives you a total of 33 = 27 possible outcomes, and in this case you need to discern 24 results from them (one of 12 balls is either light or heavy, which is 12 × 2 = 24).

So, we need to begin the tedious task of mapping each result to an outcome.

If the odd ball out is heavier...

If the ball is lighter, the first two cases are inverted.

There are 27 possible ways to place each ball in all three weighings, each corresponding to a different outcome if that ball is the odd one out. We need to find an arrangement of balls where each possible set of placements and its inverse (for the heavy and light cases) is distinct - so no two balls are an in the same place for all three weighings.

Here's a preliminary arrangement that satisfies the distinctness property. Notice that no possible arrangement appears more than once in both tables:

Right away, we run into the problem that we're not putting the same number of balls onto each scale. If you have seven balls on one side and one on the other, of course the scale is going to tip to the side with seven balls (unless your odd ball out is ridiculously heavy, but let's not entertain that scenario). So we need to invert a few of these configurations so that we're putting four on each side for each weighing. With some trial and error, we can get something like this:

So our final weighing schedule of balls is as follows:

And the outcomes are interpreted as such:

And thus, we've created a weighing scheme where each weighing is completely predetermined beforehand, that still manages to determine which ball is the odd one out, and whether it's lighter or heavier.

You might notice that we didn't use LLL, RRR, or === in our arrangements.

We can't use LLL and RRR as a 13th pair for a 13th ball, because then we'd end up having to put nine balls onto the scale, and there's no way to do that since nine is odd. We could probably use it in place of one of the LLR/RRL pairs, but leaving LLL and RRR out makes for a symmetry in the result chart that I rather like.

However, what's interesting is that you can have a 13th ball that you never place on any scale, and if your scales balance out in all three weighings, the 13th ball you never weighed is the odd ball out (although you obviously can't tell without a fourth weighing whether it's lighter or heavier).

Some of the existing answers to this ancient question are excellent, but there's one famous answer that I think deserves mention here. It comes from an article in Eureka, the annual magazine of the University of Cambridge's student mathematical society, written by C A B Smith under the pseudonym of "Blanche Descartes".

It has two very nice features. The first is that it's an "unbranching" solution: you don't need to change what you do on later weighings depending on the results of earlier ones. The second is that once you've seen it it's almost impossible to forget.

Smith's solution is written entirely in verse and includes an explanation of how it all works, but I shall quote only the actual answer. "F" here is our protagonist Professor Felix Fiddlesticks, whose mother has asked him for help with the puzzle. I have made some trifling changes to the original formatting.

F set the coins out in a row
And chalked on each a letter, so,
To form the words: F AM NOT LICKED
(An idea in his brain had clicked.)

Each of the three lines of F's injunction describes one weighing. When you've done them all, the results uniquely determine which coin is fake and in which way.

I spent some time working on this puzzle after it appeared on "Brooklyn Nine-Nine" (if you want, you can watch Captain Holt describe the puzzle here) and I wrote a detailed, illustrated solution here: Island of Tyreses Solution. In this particular version I am attempting to find an islander, Diffy, who is either heavier or lighter than the other 11 islanders.

The final solution takes into account two things I learned from previous attempts:

So, for my first use of the see-saw, I weigh the eight remaining islanders against each other with four on each side.

I’ve already outlined my plan if this first see-saw usage turns out even, so what’s next if it turns out odd? This is where the genius comes in.

I now have some “directional information.” I will henceforth call whichever direction the see-saw tilted in Use 1 “Direction 1″ or “D1″ for short. I know that if Diffy is heavy, he is on the part of the see-saw that went down, and if if Diffy is light, he’s on the part of the see-saw that went up. If I move Diffy, the see-saw will change orientation! It has no choice because Diffy, and only Diffy, causes the see-saw to tilt. Also, remember lesson #2, I have directional information and one move after the current one, so I can totally take out three possible Diffys before the next use of the see-saw. I’ll need to use one of the islanders I ruled out in Use 1 in order to keep three islanders on each side.

If Use #2 gives us an even see-saw we can find Diffy in the three we removed, but if it doesn’t, we need to pay attention to the direction that the see-saw moves. Did it move the same way as before, Direction 1, or did it change orientation to Direction 2? Our next choice will be based on the answer! If it moved in Direction 1, then we know that Diffy is not one of the islanders who switched sides for Use #2. If the see-saw moved in Direction 2, then Diffy is one of the side-switchers. Either way, we have got him down to being one of three or two. Use #3 is a little hard to generalize since it is different for each possibility. 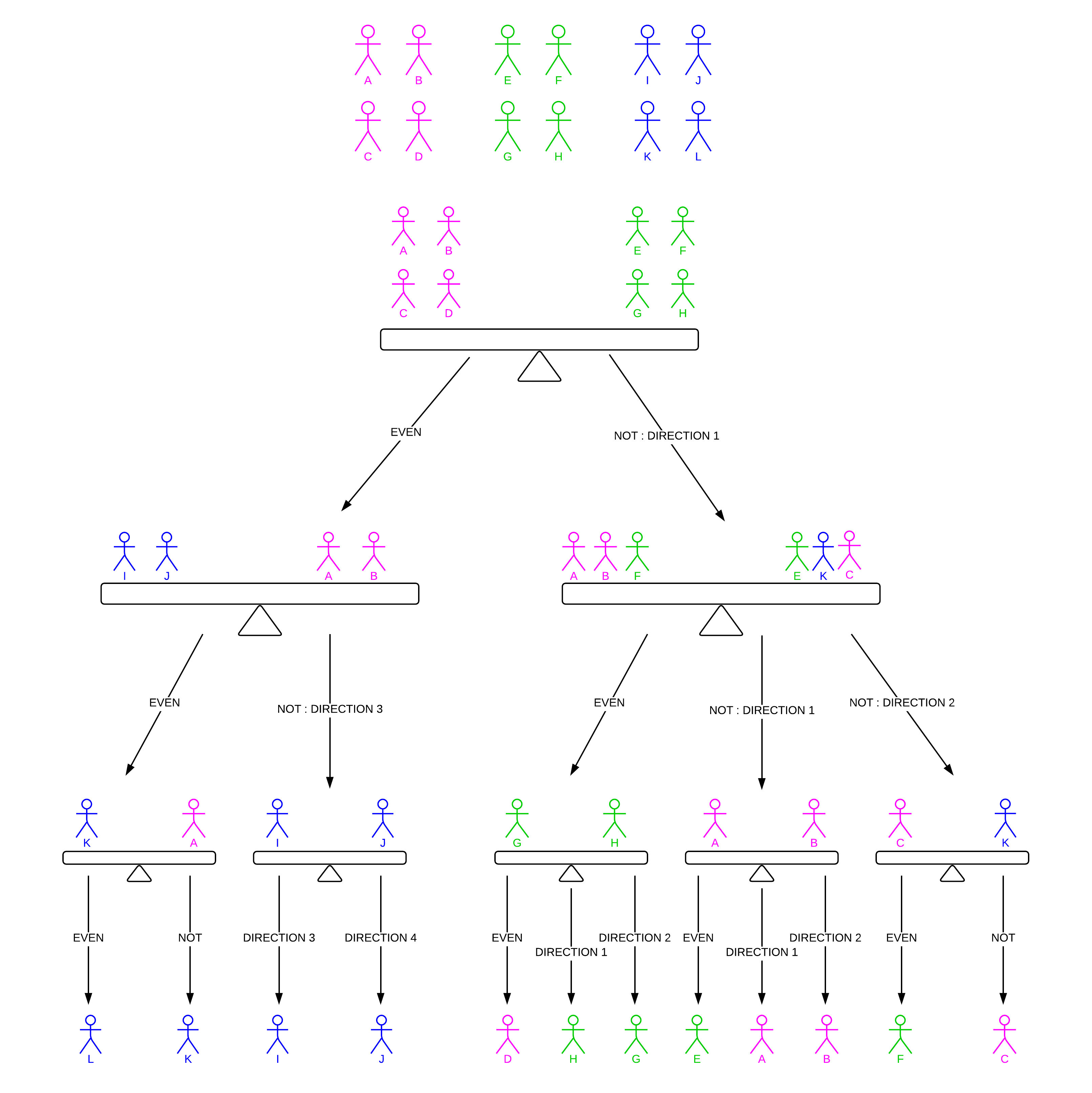 This is a rewriting by R. Allen Gilliam of Jared Anderson's solution from another version of this puzzle on this site. Perhaps it's just how my mind works, but this seems much easier to understand.

I. Finding which of 9 10 11 12 is different with two weighings when you don't know whether the different one is heavier or lighter:

II. Finding which of three men is different with one weighing when you know whether the different one is heavier or lighter:

This solution is similar to the one provided by R Gilliam but differs in the second step. Divide the balls into 3 groups of 4 balls each. Let's call them g1 g2 and g3 pick any two groups and weigh them against each other. One of two scenarios is true. The pans are balanced: the 8 balls you just weighed all have the correct weight. The pans are unbalanced: The 4 balls you did not weigh all have the correct weight.

Either way at the end of the first weighing you have at least 4 balls of the correct weight.

(1) Place balls 6 and 6 on scale. Remove one from each side until scale balances.

(2)Take last two removed (or remaining two if scale never balanced) and place on one side (side A) and two equal weighted balls on other (side B). If side A is lower the oddball is heavier, if side B is lower oddball is lighter. Remove one from each side. If scale balances, the ball removed from side A is the oddball, if not the ball remaining on side A is.

nosunnosun
1
$\endgroup$
2
Add a comment  |
Highly active question. Earn 10 reputation (not counting the association bonus) in order to answer this question. The reputation requirement helps protect this question from spam and non-answer activity.

21
Brooklyn 99 riddle: Weighing Islanders
5
Brooklyn Nine-Nine Riddle: Weighing Islanders
-2
Shortest number of attempts to solve this issue
0
How many ways to iterate?
-1
The 12 islander question
0
Brooklyn nine nine 12 man riddle island
-2
This weighs heavily on my mind
1
Island Riddle. - How would you approach this and what is your mentality?
0
Analytical puzzle
26
How do you solve a word puzzle when you have no idea where to start?
See more linked questions

10
N balls and a scale
14
Twelve balls on a scale, where one ball is lighter and another is heavier
3
$N_{max}$ balls in 3 weightings
31
15 Balls Sorting
4
Are there basic weighing puzzles requiring adaptive strategies?
4
12 balls 1 scale with 4 groups
10
2 fake coins from a pile of 30 coins
4
Weighing half-balls
2
19 balls and a scale