A group of 10 students in a summer learning camp (fun times!) is asked to complete a brief survey to help them determine which of their new classmates they're most compatible with. The survey lists 10 subjects (math, science, English, art, history, band, gym, biology, shop, and home ec) and asks respondents to mark each subject as "like" or "dislike".

The teacher writes the affinity scores for all 45 pairs of students on the board, then addresses the class.

I'm pleased to see that every student likes at least one subject, and I've noticed that no two students like exactly the same set of subjects. What I find bizarre, though, is that all of your affinity scores are even numbers. I've never seen that happen before. I'm wondering if it might be because the total number of 'likes' over all your surveys is 50 out of 100 possible; exactly half.

Hearing this, a particularly math-savvy student, Keenan Byonde, puts up his hand and explains,

What example and what simple procedure should Byonde write on the board to prove he's correct?

Divide the 10 students into 5 pairs. Assign each student a different favorite subject.

If each student only likes their favorite subject, then there are a total of 10 "likes" and no affinities. To add 8 "likes", choose two pairs to meet each other. When two pairs meet, each student "like"s the favorite subjects of the other pair (four students each adding two likes). There are ten pairs of pairs. When they have all met, there are 90 "likes": every student likes every subject except their partner's favorite, and all affinity scores are 8.

Diagram: black squares are initial likes, more likes can be added in groups of 8 squares with the same number. 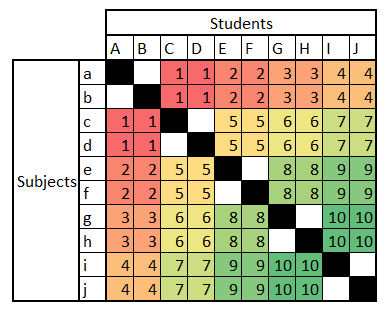 Posting this as I don't have time to finish. Either I'll come back to finish it later or someone else will take it and run with it.

For $n=10$, assign $s_i$ to $c_i$. Each student likes one class, each affinity is zero, no students like the same set of classes.

This suggests the general method: to add more likes, take a set of $m$ students and classes such that $m$ is even and have each student like one of the $m-1$ distinct combinations of $m-1$ classes. If $m=4,6$ we may add a second group of 4.

At this point we throw our chalk at the blackboard in disgust.