Want to See My Crossword? Too Bad!

I had a wonderful crossword all prepared for you.

It was an 8-by-8 American-style grid with white and black squares, 180° rotationally symmetric. All the words contained at least two letters, and each white square belonged to exactly two words, one across, one down. All the whites were connected to each other, and the clues were numbered in the standard American style.

I even had the clues all ready to go.

What's that? Some of the clues are missing? That must be because you're such a big jerk.

Here you go, cuddles. A few of the missing clues:

But I'll chew glass before I tell you where they go.

So there you have it, bonehead. You can't tell me where the blacks and whites go on my crossword. You definitely can't tell me what letters go in the white squares. And it's inconceivable that you could solve the crossword, place the missing clues beside their proper numbers, and come up with creative clues for any left over entries.

Because if you did all of this, you'd have solved my puzzle.

Driver of the White Volvo (You Know the One!) 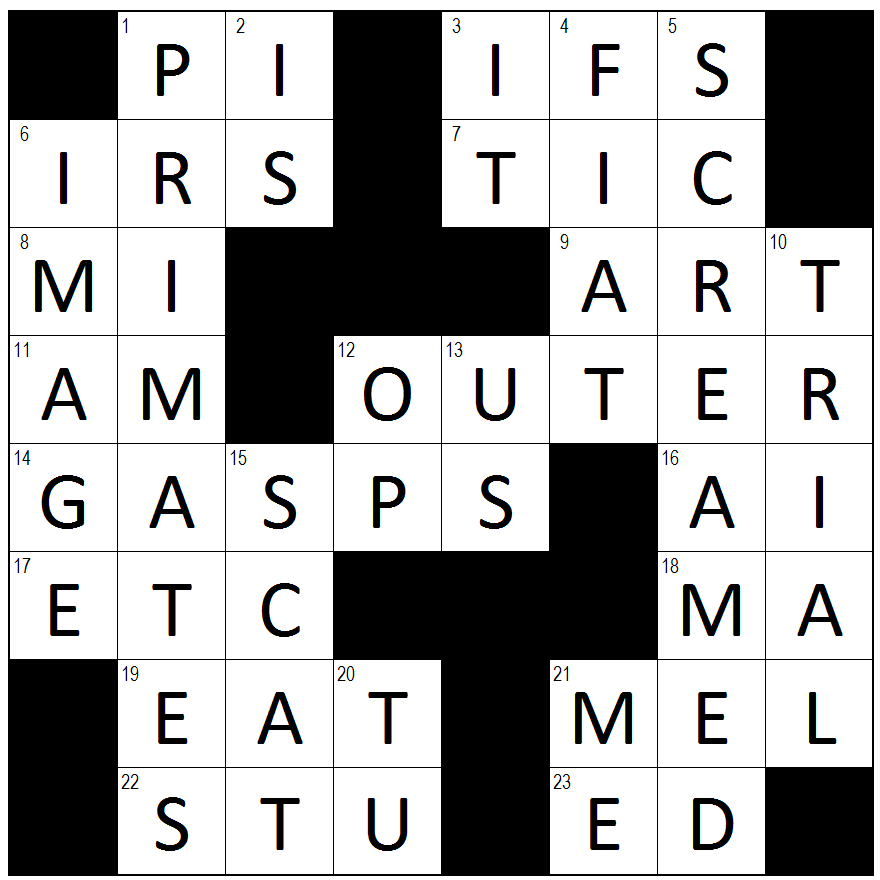 Given clues but missing numbers:

Clues for other missing clues

Process (as requested by Emrakul):

By comparing the across and down clues, you can figure out a few things very quickly. Firstly, 1 across is 2 letters and 3 across is 3 letters. There's at least one black space between them and two more in the first row. Since there's a 6 across AND a 6 down, you know that there's a black space before the first word (otherwise there wouldn't be a 6 down on the second row). Similar rationale with 7 and 8 across leads us to conclude that those are the same length as the clues above them. But 9 across must be a letter longer, since there is a 10 down (but no 10 across), so there are a couple black spaces in the upper right corner.

A combination of the rotational symmetry and a few clues at the bottom (MEL, STU) gives us a good frame for the bottom half to confirm this and I started filling in other clues (PI, IRS, MEL, STU, IMAGE, FIAT, PRIMATES, SCREAMED)

With some of the words filled in, and keeping in mind parallel symmetry, I reached "OUTER" and "GASPS" as the two words bridging the middle gap. That finished off the black squares of the grid. With a good chunk of letters, I started filling in the clues with missing numbers. AM was already done, and TIC, IT, M.E. came pretty quickly after. The few remaining squares were not too tough to finish off.

Not the answer you're looking for? Browse other questions tagged geometry crosswords crossword-clues or ask your own question.

14
Why is "trapeze" the solution to this cryptic crossword clue?
5
Cryptic Crossword #2: Stack-in-the-Box
10
Crossword With Friends
4
Golf ... driving test?
48
A crossword so simple, it practically solves itself
16
The Rotated Crossword
5
Help with a "tougher tuesday" crossword puzzle on "animal opposites"
15
Chess problem: Make a crossword in 3 moves
4
A Very Special Crossword
8
Fun Cryptic Crossword