Sly Cooper and the Space Police

Sly Cooper has landed on a deserted planet with 2 policemen. He is moving around the planet, painting a line along his path, claiming any land which is surrounded by paint (the smaller area of the two resulting parts). The policemen are trying to restrict the land Sly Cooper claims as much as possible. If they encounter him, they arrest him and take him away. Can you prove that the policemen have a strategy, which prevents Sly Cooper from claiming more than 25% of the surface of the planet?

Remark: We assume that Sly Cooper and the policemen are moving with the same speed, take decisions in real time and are fully aware of everybody's locations.

P.S. Don't care much about reputation points, so decided to spread some around...

To get some institution about the problem, try to prove that one policeman alone is enough to restrict the area to 50%. Even though identical strategy may not work for the case of two policemen, it still may give some good ideas.

The solution (at least mine) does not require considering different cases. It is just a universal strategy, working no matter what the initial locations are.

Assume the police are at points P1 and P2 and Sly Cooper are at point SC. Draw a circle through the three starting points. This circle will lie on the sphere. Draw the three lines that pass through each point and is perpendicular to the circle. The lines will intersect at two points: call them the poles. Call all lines parallel to the circle horizontal, and all lines that go from pole to pole vertical.

SC is always between the lines passing through P1 and P2.

The police need to make sure that SC stays between the lines passing through P1 and P2 while narrowing down the distance between the two lines. The strategy goes as follows: 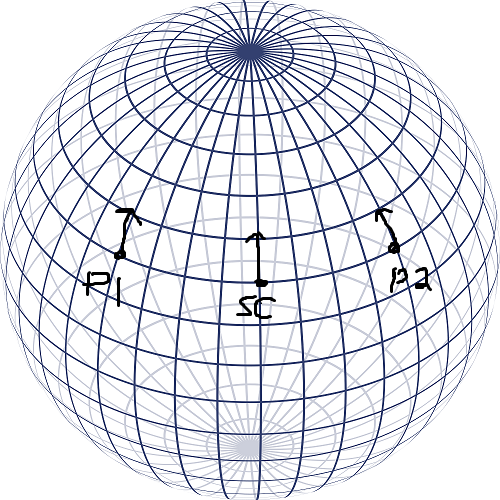 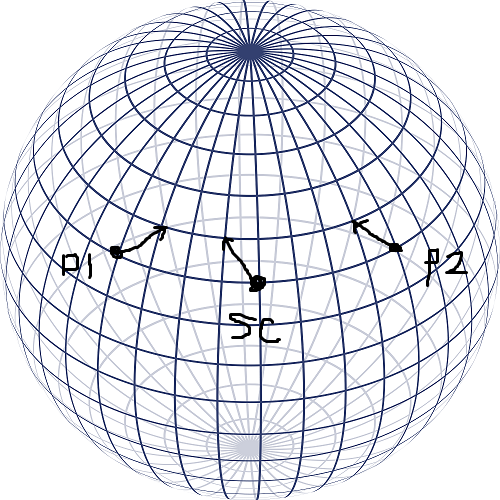 Based on this strategy, the police will always be on the same horizontal line as SC and will reduce the possible horizontal movement by one unit for each horizontal unit SC moves.

To claim the largest amount of land, SC must keep his horizontal movement to a minimum.

The worst case would be when the police are right next to each other and are on the diametric opposite of SC on the original circle. 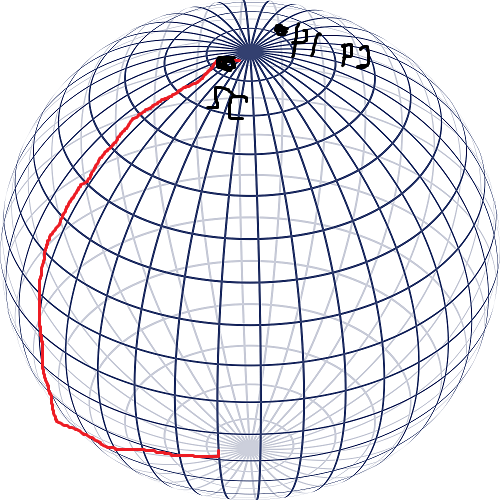 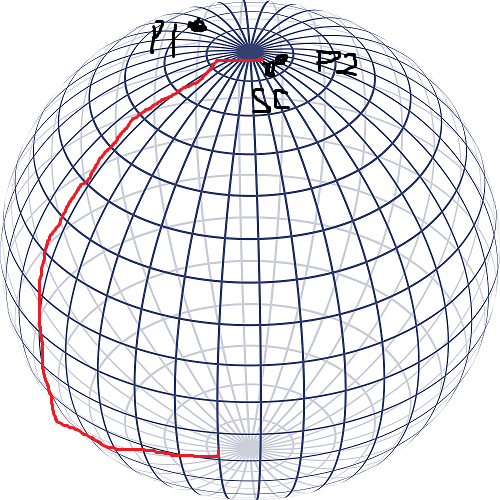 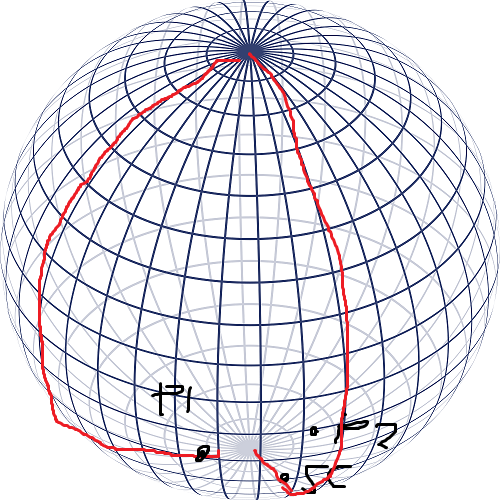 So in the worst case, SC claims a quarter of the planet.

1 Well, an insignificant distance from it. If he moves exactly onto that spot, the police would catch him.

Lets consider the initial conditions: Anything. As such we need to account for all possible relative orientations. The likely limiting case would be both cops are on the opposite pole from master cooper. As such they are $r\pi$ away from him. To win the sly fellow needs to acquire $\pi r^2 area$ the smallest such area would be a circle of radius r. Unfortunately, we are on a sphere so non-euclidean geometry applies... drats. This path would take walking $2\pi r$ distance to create with an initial $r$ to get out to the circle (or maybe just starting a circle from the pole). (so maybe the actual worst case is they are both opposite the pole cooper is $r$ distance from. If he goes for the simple circle (which by the way circle is most efficient perimeter to area ratio) they could meet him when he is a little less than half way around. ($(\pi -1)r$ around precisely for the r away from pole initial condition). So this doesn't seem like Sly's optimal strategy as he is less than half way to having his area.
This was just a thought experiment hope it helps someone out, I think I will update in the future but I imagine it will come down to circles and possibly angular velocity.

Not the answer you're looking for? Browse other questions tagged mathematics geometry pursuit-evasion or ask your own question.

11
Star-Lord and the Space Police