Ernie and the Bubbles of Lucretia

"So, what do you know about milking spiders?", asked Ernie as he passed a fresh cup of coffee to me.

Good grief!, I thought and gave an involuntary shudder as I glanced at the milk jug sitting between our two cups I didn't even know spiders had udders!!!. "Think I'll have black coffee this morning", I replied.

Ernie gave an amused snort. "Not that kind of milking." he reassured me. "I spent half of last week getting samples of fresh silk directly from Lucretia's spinarettes. Lucretia is a Vanuatuan Orb Web Spider - and it is claimed that, weight for weight, her web is 10 times stronger than steel!"

I looked over at the terrarium - Lucretia was as big as the palm of my hand appeared to be sulking. "Non-venomous of course" continued Ernie, "but they can be a bit bitey when they are stressed". I noticed that Ernie's fingers and thumbs were dotted with numerous red wealts. "But I can't complain - all great research requires a little sacrifice - and thanks to my analysis of Lucretia's silk I have managed to synthesize a material even better than nature can create - an artificial silk that is transparent as glass, 1000 times as strong as steel, chemically inert, and what's more - if you expose it to a special catalyst it sets as hard as diamond!"

When we had finished our coffee he asked me to help test his new silk applicator gun. "When you press the red button it will squirt out a thread of silk - when you stop it will spray a little cloud of catalyst to rigidize it".

I squeezed the button, but instead of a thread, the device produced a small bubble. "Oops" said Ernie, "I didn't expect that - must be air in the reservoir". We examined the bubble. It was about as big as an orange with a negligibly thin wall thickness, but to my surprise, when I picked it up it was as rigid as a crystal ball. Ernie thought for a moment then smiled. "Actually, I think bubbles will be even more useful than rigid threads. I can make special flasks for an experiment I have planned."

Ernie asked me to blow a second bubble, this time much bigger. "It has to have a certain exact volume for the experiment" he said, "I'll tell you when to stop." I pressed the button again and this time held it down - a large bubble inflated from the applicator. When Ernie nodded his head I let go of the trigger, but the bubble continued to expand until it was bigger than a beach-ball. Ernie examined the gun. "Oops - didn't expect that - needs a bit of lubricant on the trigger mechanism". He fiddled with the applicator then claimed it was fixed.

But now the volume of the sphere was much too large for Ernie's experiment. "By my measurement it is exactly one meter in diameter" he said, "Much too big, but if we drill a small hole into it then we can blow another bubble inside - that will reduce the remaining volume in the sphere until it is exactly right. I'll tell you when to stop." I followed his instructions, but this time, although I kept holding the button down, the interior bubble stopped growing too soon. "Oops - didn't expect that, small electrical fault in the secondary trigger mechanism." He fiddled with the applicator then claimed it was fixed.

"The remaining volume is still too big", said Ernie. So I blew a third interior bubble. When I had finished it formed the largest sphere that could fit inside the exterior bubble alongside the first two interior bubbles.

"Volume is still too big", said Ernie. So I blew a fourth one. When I had finished it formed the biggest sphere that could fit inside the large bubble alongside the first three interior bubbles.

A few days later I had a phone message from Ernie (who had left town for a few days). His experiment had gone well but now he needed a second 'reaction chamber'. Could I pop around to the lab and blow one more sphere so it would be ready for his return? It needed to have exactly the same interior volume as the the remaining space in the one we made earlier. "I've mixed some more spider silk, but there isn't much to spare so I think you need to blow it the right size on the first attempt. I've also added a size dial on the applicator so you can stop at exactly the diameter you need (to the nearest micron)."

The problem is that Ernie failed to say exactly what diameter that should be! Can you help me work it out?

If the first bubble has diameter $n$, then the second bubble must have diameter $1-n$.

In the space remaining, there is always space for two bubbles of the same size that are both the largest bubbles that can fit into that space. (A proof to come once I'm not on my phone.) 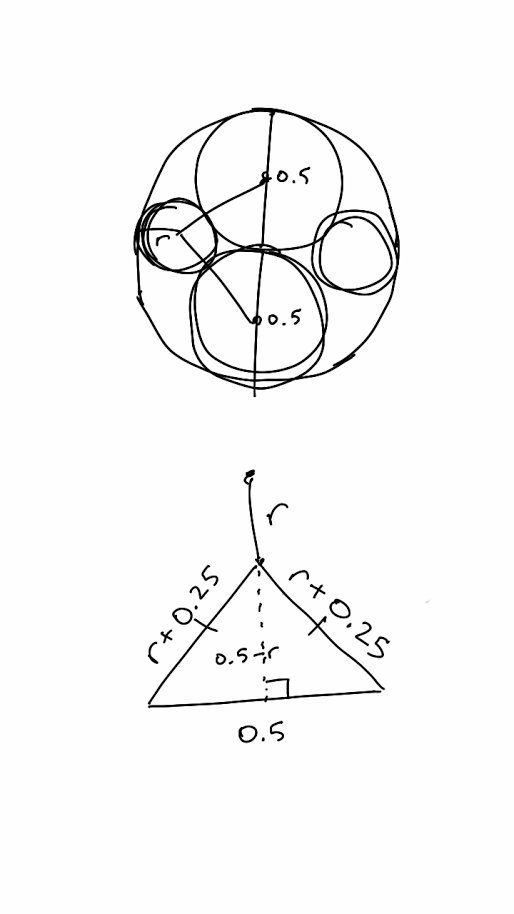 12
Ernie and the Thrones of the Aqua-ant