How many rotations does the smaller coin make around its own center in the rest frame? Equivalently, if you drew an arrow on the small coin which was initially pointing East, how many times during the process would the arrow point North?

The number of revolutions would actually be increased by one (see this link provided by Mike), so the answer could be either $N+1$ or $1/N + 1$ if N is greater or less than 1 respectively.

The answer is actually:

Every time the small coin rolls a distance of π it actually makes 1+1/N revolutions around its own center. The angle from the center of the small coin to the point at which the coins touch will be 2π/N more than the angle at the beginning. 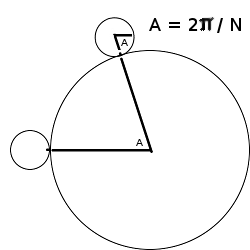 So by the time it rolls Nπ then it has made N*(1+1/N)=N+1 revolutions around its own center. If you then add to this the one revolution it has made around the large coins center then you get N+2

1
Circle rolling on a circle
3
Coin around shapes: A Geometric paradox?
0
Number of turns a coin makes going around some other coins

17
The Laziest Surveyor
14
Ants playing tag!
15
The Trickster's Game
15
Ernie and the Optical Gyroscopes
22
A Bridge Problem
3
Pirates dividing booty around a circular table
0
Number of turns a coin makes going around some other coins