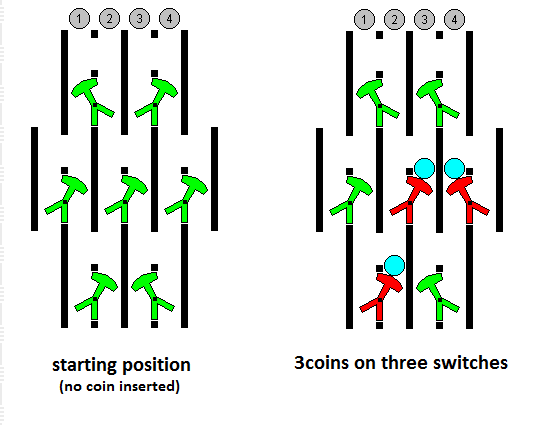 You have to insert coins into the slots 1, 2, 3 or 4. A coin that hits a green switch on its head rests there; a coin that hits a switch on its leg changes switch position. A starting position is shown on the left side. The goal is to have 7 coins in the machine (one on each switch). Partial solution is shown on right side (3 out of 7 coins are on the right places). You can insert as many coins as you need, your supply of coins is unlimited.

You can try this game here (a java applet).

Is it always possible to solve the puzzle? Is there a way to calculate the solution?

First of all if either of the top two switches has a coin on it, drop another to clear it. Now, if either of them are leaning in (and by leaning I always mean the top of the switch leaning that way), drop a coin on their outside so that lean out. From now on we will only ever hit a top-row switch with pairs of coins (one each side), so they will always stay clear and lean out. (until the final two or coins, anyway!)

Observe that we can now drop a set of four coins one each into the four slots - in any order - and these three switches will all end up clear, and the top row leaning out.

Consider the outside switches on the middle row. After the first coin strikes them, they can only ever lean in. Let's drop a set of four coins so we know they're leaning in. The only possible states are with-coin and without.

If the outer-middle switches do not have coins on them, drop a set of four so that they will.

(I'm going to ask that the very first coin of each set of eight be placed directly above the exposed leg of the central switch. This is to constrain the order in which the coins arrive at the lower switches. It doesn't actually make a difference to the outcome in the next paragraph but does make it easier to calculate.)

What happens to the lower switches when we drop a set of eight? They each get hit inside, then outside, then inside again. The effect this has depends on their initial state.

Next, we deal with the bottom switch toward which the central switch is leaning. We want it to be in+laden. If it is in+unladen, drop a set of eight. Now it is in+laden.

If the other bottom switch is also in+laden then the bottom row is complete. Otherwise we complete is as such:

Drop two pairs (preserving the state of all but the bottom row because the outer-middle switch gets toggled twice) on the side toward which the central switch is leaning (the side that is currently in+laden). The first pair will drop a coin on the outside of the near bottom switch, making it in+unladen just like the other bottom switch. The second pair will drop coins on the inside of both switches, loading them up.

Once the bottom row is complete, we simply drop a coin from directly above the head of the central switch to load it up, then do the same for the two switches on the top row.

Okay, now you can all have fun spotting the mistakes I no doubt made. :)

This can be modelled as a graph transition problem. There are $(2 \times 2)^7 = 16~384$ possible states the machine can be in, with each switch being either on the left or the right, and the coin on the switch or off of it. This is represented as a directed graph with $16~384$ points.

Your goal is to get from one of the $128$ states where none of the switches have coins on them to one of the $128$ states where all the switches have coins on them. This is equivalent to finding a path in the graph from the first state to the second state, which is doable with a computer using breadth-first search. The length of the path represents the total number of coins you need to insert.

The starting position shown cannot be solved in 7 coins. Look at the rightmost switch. You can't land a coin on its head without first flipping it. When you flip it, the coin will continue on through the bottom switch and out of the machine. Unless you've flipped the bottom switch already, which again means you've lost a coin out the bottom.

Edit: turns out I was misunderstanding the question, the wording was a bit confusing. You can use more than seven coins in order to get seven coins stuck.

Not the answer you're looking for? Browse other questions tagged mechanical-puzzles or ask your own question.

15
A haunted vending machine that you can't see inside