Optimal strategy against a random opponent

Imagine a very big number (2N) of people, who do not know each other, and play the following game:

Suppose that all 2N players are M-level players. What is the optimal strategy for A- and B-players to win as many games as possible? What will the wining percent in each group be?

For example, for M = 1 [I do not know the solution, so, please be careful, mistakes can be here]: 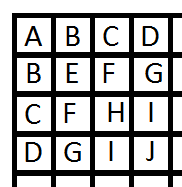 If one were to work through the way you describe (each player taking into account only the previous players plan), then a 12-unit loop would quickly be observed. Case $M=2$ is the same as case $M=14$ which is the same as case $M=26$ etc. This doesn't really help anything. This loop does not yield a perfect strategy for either player. Essentially, no $L$ level player will be against an $L-1$ level player so why plan as if he were? As there is a loop there isn't really an $M=\infty$. 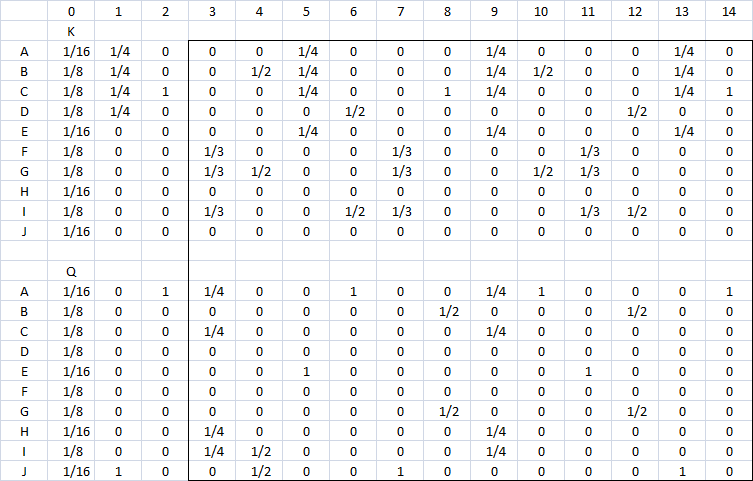 Lets pretend that a better player of level $L$ chooses a plan which assumes that the other player will randomly choose a strategy such that $ S < L $. So $ M=3$ takes into account $M=1$ and $M=2$ (but not the totally random case).

After 10,000 iterations of this done (by making a matrix of what position has what probability of beating what position multiplied by vectors describing the probability of each player choosing each position) I get the answers below for which the queen wins about 35% of the time while the king wins 64% with both players playing optimally. 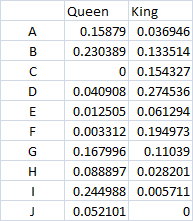 Looking at it from the perspective of the queen trying to find a perfect strategy and the king reacting perfectly, this does not improve much over the queen just randomly picking any square!

I also designed a pseudo-evolutionary algorithm where 20,000 games are played. Each player chooses where he should go based on the third power of the percentage of times he won in that spot previously (plus a small mutation factor close to the value of 1 win). This isn't worth much, but it claims the king should: prefer A, B, and C; choose D, E, and F about 1/2 as much; and never choose H, I, and J. The queen should chose about all randomly, but prefer H, I, J, and E. I think there is too much noise though in this program, and I don't want to focus on it anymore.

Likely, the best strategy possible is the one that has no preferred placement of the kings, as everywhere is covered equally. I doubt that a strategy the would let the queen win more than 40% of the time if the king playing perfectly is possible.